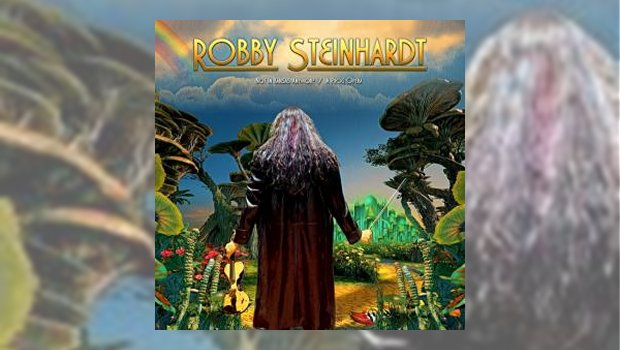 We know him mainly as the violinist, singer and frontman of the legendary American progressive rock band Kansas, with whom he recorded ten studio albums, good for gold, platinum and double platinum status. And now there is a solo album, his debut as a solo artist. The new album has been given the intriguing title Not in Kansas Anymore. Quite an obvious title, although it is not entirely clear whether it is just about the band or also the state: he previously moved to Tampa Bay in Florida in 1980.

The album is laced with the music everyone knows so well from the band he co-founded and was part of twice; between 1972 and 1982, and from 1997 until his retirement in 2006, when he was replaced by David Ragsdale. His prominent violin playing was always a big part of the band from Topeka, Kansas’ unique sound. He also regularly featured as a (baritone) vocalist, both lead and harmony with the tenor voice of Steve Walsh.

It is a powerful, well-crafted album, full of old-fashioned prog rock, but with a modern twist. Strong songs with orchestral arrangements and virtuoso performances, not least thanks to the input of a number of friends from the music world. Steinhardt’s vocals and signature electric violin come into their own on this contiguous material, subtitled ‘A Prog Opera’.

Opening track Tempest is a short, rocking instrumental with driving bass and characteristic violin, merging into Truth 2 Power (Only Truth Can Change the World) an equally rocking song with a poppy hook and a recognisable, easy sing-along theme. Slightly ELO-esque, which becomes more apparent in the next song, Mother Earth (Is Calling You). Soundbites, a recognisable bass/violin/guitar intro and music that sounds even more like ELO than ELO itself. The lyrics are about the irreparable damage we cause to Planet Earth.

Rise of the Phoenix (Climb to Grace) is another instrumental with string ensemble, featuring Steve Morse on lead guitar and Michael Franklin on piano, plus wonderful drums from veteran Billy Cobham. This song flows seamlessly into The Phoenix, with Steinhardt’s latter-day McCartney-inspired vocals, swirling contrarian rhythms and hectic prog/jazz-related instrumentation with plenty of room for soloing.

Prelude is a heavily orchestrated intro to a drawn-out remake of the monumental Dust In The Wind, from the classic 1977 album Point of Know Return, this time with Lisa Fischer as lead singer in the role of Steve Walsh and Chuck Leavell’s piano instead of acoustic guitar. Extensive harmony vocals, double bass, cello and violins complete the whole. Oh yes, and there’s a sliver of Stairway to Heaven.

Pizzacato (A Slice for Baby Boy Flynn) is exactly as the title suggests, a pun on plucked string pizzicato violin playing, with Ian Anderson’s flute and harpsichord. Almost classical but with a folky twist, it’s brilliantly done. Downtown Royalty is another high point, a song of praise to the ‘kings’ of the street, the drifters and prostitutes, featuring the great but lesser-known guitarist Les Dudek (Boz Scaggs, Stevie Nicks, Allman Brothers) on slide guitar, heavily arranged by Michael Thomas Franklin. Tuck Tuck, no doubt intended to be funny, is an ultra-brief reference to Snow White and the Seven Dwarfs, humorous, but also slightly misplaced.

The title track is a sympathetic autobiographical song about Steinhardt’s time in the group that would make it to world fame. Vocally, Steinhardt’s voice comes eerily close to Mark Trueack’s (Unitopia), the song full of references to Kansas tracks and melodies from The Wizard of Oz. Somewhere within it a true pop quiz is hiding. Bonus track A Prayer for Peace is an equally stylish and appropriate closing to Steinhardt’s debut as a solo artist. A melancholy instrumental with a strong melody line and leading roles for Jim Gentry’s guitar, Franklin’s organ and Steinhardt’s unsurpassed violin.

The total playing time is relatively short, at barely 45 minutes, just sufficient for two sides of an LP. But as said before, better short and sweet than long and boring. The latter is certainly not applicable, with the help of an army of musical friends and producer/songwriter Michael Thomas Franklin who, with a great sense of decorum, provides Steinhardt with a proper stage to achieve this milestone. Calling it ‘a Prog opera’ is perhaps a bit too much, I don’t immediately see the connection between the songs, but the whole sounds excellent. The latter also applies to the crystal clear production. Kudos too for the beautiful artwork, created by Tom Lupo. This album is an absolute must for fans of Kansas and ELO.

After completing the album, Steinhardt had begun rehearsals and preparations for touring in August when he became ill in May. Unfortunately, he is no longer allowed to witness the release of his firstborn, the title taking on a new, tragic meaning: Robby Steinhardt died on 17th July 2021 after a short illness, at the age of 71, from the consequences of acute pancreatitis. He leaves behind his wife Cindy and daughter Becky. After consultation with his widow, the album was released posthumously in October 2021.

“Now, don’t hang on, nothing lasts forever but the earth and sky
It slips away, and all your money won’t buy another minute
Dust in the wind
All we are is dust in the wind…