Thanks to Facebook, I am able to see that on 17th January 2021 I had been listening to the Eighth Tower Records compilation The Black Stone – Music for Lovecraftian Summonings for about a week, and had already declared the “malevolent and threatening doom and gloom” as “fabulous, and my favourite release of 2021, so far”. That might have seemed rather premature, but as I’m writing this, it’s now 5th December 2021, and The Black Stone is still one of my favourite releases of this year. What’s more, it has now been augmented by a compilation of short stories (sharing the same title, but substituting “Stories” for “Music”). While it is the first to be accompanied by a book, The Black Stone is the second aural tribute to Lovecraft released on the label. These compilations have a perfect home at Eighth Tower Records (part of the Unexplained Sounds group of labels) – presumably named after the book by John A. Keel, whose cosmic views closely paralleled Lovecraft. In The Eighth Tower, Keel explained how a “superspectrum is the source of all paranormal manifestations … it is extradimensional, meaning that it exists outside our own space-time continuum yet influences every thing within our reality.” It is surely no coincidence that the first release from Eight Tower Records is titled Superspectrum.

I’ll admit, my knowledge and experience of the work and mythos of HP Lovecraft is limited. Prior to listening to this music, and later reading the anthology, my only Lovecraftian possessions were albums by Shub Niggurath and Reuben Bradley’s Cthulhu Rising, but I was aware that Lovecraftian works provide their horror in the unknowable, incomprehensible and inevitable, rather than shock and gore. The horror is as much in what is not revealed, and left to the imagination, than what is described – or even describable. It’s about the abstract and alien that surrounds us, just beyond our perception, and revealed in part, where the whole might destroy us. It’s the realisation of our utter insignificance and powerlessness in the universe. In fact, my earlier description of malevolence is, in a sense, wrong, betraying only how we view the world as it affects us. The monsters of Lovecraft are not necessarily evil at all, so much as indifferent.

The music of The Black Stone wonderfully evokes all of this. In a TPA review earlier this year of another Eighth Tower Records release, Drone Islands: Stellar, I described its contents as “dark ambient music which is more thrilling than any sci-fi horror film. Its mix of dull, clanking industrial, and alien sounds are an absolute aural treat.” I’m confident that as much as this is down to the quality of the contributors, it is due to the consummate curation of label boss Raffaele Pezzella. A lot of consideration and care has been put into the construction of these compilations, and it really pays off. Right from the off, Mombi Yuleman convey the spooky and spacey idea that there is something out there – just beyond or beneath our perception. Those ideas of Beyond and Beneath are virtually essential to any Lovecraftian tale, and what’s more the watery sounds of the opening track perfectly match the opening short story of the accompanying anthology:

“He didn’t move, was scarcely breathing, flimsy clinker planking was all that separated him from impossible deeps. His slightest motion would start ripples, upsetting the balance, and signalling his presence to all that dwelt in silence and darkness below.”

There aren’t often vocals on tracks from The Black Stone, and when they appear they are highly effective. The whispered vocals of the second track, by Martyria, up the unease, before it’s back to Beneath with Lars Bröndum. The choral hints of Solatipour Rena lead nicely into the manipulated acoustic instrumentation of Dead Space Chamber Music. This nocturne nicely dovetails with the threnody within the anthology, and in fact it is possible to find parallels between the music and the stories throughout the compilation and anthology. While there are 26 short stories and 14 tracks, it is hard not to be impressed by how much work Pezzella has put into making the two Black Stone releases dovetail so perfectly. With any compilation or anthology, it is almost inevitable that not everything will be to one’s taste. But while there is one short story in the anthology I wasn’t so fond of, there’s not a track on the compilation I don’t love. And the flow and sequencing is just right, despite some quite different styles of experimental music.

Despite not having a release that requires two sides, for me the album does have just that: two more or less equal “sides” of music. The eighth track, from Cosottini, Bocci & Barbiero, makes me think of a mix of the sounds of the opening track by Mombi Yuleman, crossed with the acoustic stylings of Dead Space Chamber Music’s track. It sounds a new beginning, or second coming, for the the album. For me, the Haunter of the Dark is once more the darkness of the deep – of the Beneath. I’m back on the ocean, but given those sonar-like pings, I’m no longer on that raft, but submerged and enclosed. There is a metallic and claustrophobic feel to the track. And yet, in its own way, it’s quite beautiful. As is Ashtoreth’s track which follows shortly afterward, and has much of the same feel. And it almost sounds like whale song – but not quite of our world, so much as something far more ancient.

There is a far greater diversity of sounds and styles than one might expect from The Black Stone, and yet they are seamlessly woven into a whole that is akin to being immersed in a novel or a film. The compulsion to keep turning the pages, or stay glued to the screen, is as inescapable as the fate of the protagonists in any Lovecraftian story. It holds attention from beginning to end (the final two tracks being two of my favourites). Of course, the end does not necessarily provide resolution, or at least, not the type usually hoped for. But the ambiguity serves to fire the imagination, and The Black Stone certainly fires mine. There are not many albums I listened to enthusiastically at the beginning of this year, that I am still listening to just as enthusiastically now. This is one of them, and to have an accompanying anthology of short stories only makes it greater in my affections. 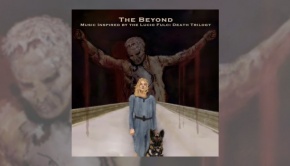