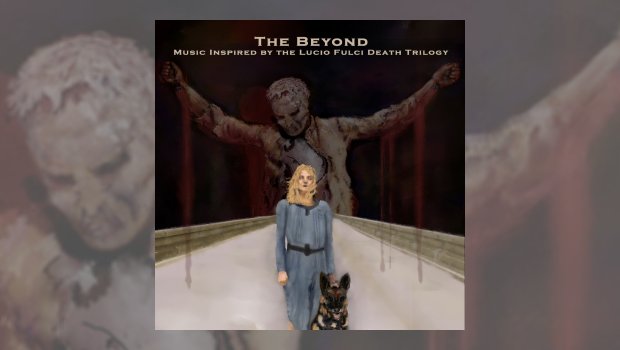 Hot on the tail of Eighth Tower Publication’s first anthology of short stories to accompany a compilation on Eighth Tower Records, comes a second. I noted in my review of The Black Stone that “Lovecraftian works provide their horror in the unknowable, incomprehensible and inevitable, rather than shock and gore.” Lucio Fulci, on the other hand, went almost straight for the shock and gore, and that difference is apparent in both the album and the book dedicated to his “Gates of Hell” trilogy of films. If Lovecraft were pulp fiction, Fulci was almost literally the pulp, and the music and stories of “The Beyond” are immediately more visceral, vivid and visual: the bloodiedpulp of flesh and meat exposed by the bite of the undead. Of course, it’s not that simple a delineation, and Fulci was greatly influenced by Lovecraft, with his “Gates of Hell” trilogy being a tribute of sorts to Lovecraft. The first film in the trilogy even took place in the fictional village of Dunwich, Massachusetts, created by Lovecraft. As such, as much as there are differences between this release and the previous book and album combo, there are also numerous similarities.

The first track of the album references the Book of Enoch, which forms part of the plot of “City of the Living Dead”. The location and details of that film are also referenced in the first story of the accompanying anthology, which also reintroduces a character from one of the short stories from The Black Stone, providing a pleasing sense of continuity between the two releases. Nàresh Ran’s track emerges from its indistinct beginnings, much as the monsters of the first short story emerge from the fog, and shuffles forward with menace. It’s slow gait is ominous and threatening. The horror becomes overt and in your face with the sound effects employed by Mario Lino Stancati being more affecting than his track on The Black Stone. It’s reminiscent of Tool’s intermezzos and industrial-era Bowie, and as perfectly portrays the aesthetics of Fulci in music as Stancati did Lovecraft with his track on The Black Stone.

The next track is from another artist who appeared on The Black Stone, Kloob. In fact, almost every artist on The Beyond provides three tracks, presumably in keeping with the idea of this release being inspired by a trilogy. Quite why Bad Girl contribute only two numbers, I’m unsure. Their first track on the album, He Opened the Gates of Hell, is another early highlight of The Beyond. Like a film, compared to a novel, less is left to the imagination in the music of The Beyond, which means it can easily fall flat. But tracks like this, and the following from Progetto No Name + DuoSerpe are quite captivating. Each have a cinematic quality, but with very different stylistic choices. At this point, I have to admit to being both surprised and impressed. A lot of what I loved about The Black Stone was how much the music left up to my imagination. I knew music inspired by Fulci was never going to do the same, and I worried that the more “in your face” approach might be rather alienating to me. I should never have worried, as all five artists who feature on The Beyond provide some amazing soundscapes, that may leave less to the imagination, but are not less impressive.

For me, though, the star of the show is Stancati, who returns now with another brilliant piece. Perhaps ironically, his track on The Black Stone, while I’d not go so far as to call it one of my least favourite, was not so impressive. But his music pushes all my buttons on The Beyond. Nàresh Ran then dials up the terror by turning down the sound. This second Nàresh Ran track is another favourite, featuring one of the quietest crescendos and anticlimactic climaxes ever. It really shouldn’t work as well as it does. Progetto No Name + DuoSerpe are clearly far more fonder of turning the volume up, and these two disparate pieces provide a neat counterpoint to each other. Once more, Raffaele Pezzella proves how good a job he does curating this sort of release, compiling the tracks perfectly. The music of this compilation, and the short stories of the accompanying anthology, are full of perverse and surreal depictions that grab attention and hold it.

The final Stancati track is next, and it’s possibly my favourite of the three. Bad Girl also impress with their second, and final, track on The Beyond. Lucio Fulci was extremely expressive with visuals, and Bad Girl are extremely expressive with audio. The final two tracks provide an unexpected turn, with Nàresh Ran providing the loudest of their three tracks, and Progetto No Name + DuoSerpe the quietest of theirs. Both are fantastic, and the latter is wonderfully titled as it does indeed provide an ending nightmare that is quite beautiful. Whether or not you like The Black Stone or The Beyond more is probably largely down to how much you like to use your imagination when listening to music. The latter doesn’t often leave much to the imagination, while the former leaves a great deal up to the listener. As much as I like The Beyond, and I like it a lot, I do prefer The Black Stone. But a lot depends on my mood. For active listening, perhaps The Black Stone works better, but for passive listening it’s hard to go past The Beyond. Both, however, make excellent soundtracks for reading their accompanying anthologies.