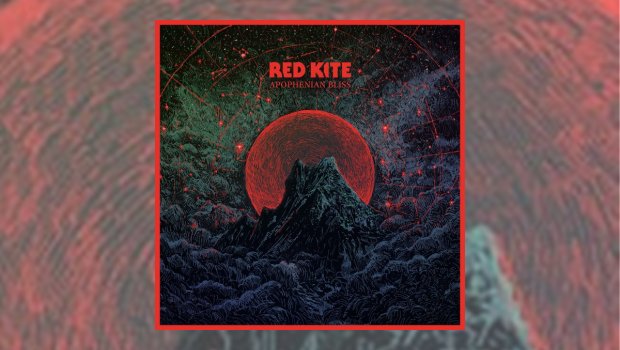 For yet another album conceived during lockdown, Red Kite have come up with a great title, Apophenian Bliss. With all the misinformation on social media, and conspiracy theories abounding, I guess it’s understandable that people see connections that simply aren’t there, as they try to make sense of a senseless world. Then again…!

Red Kite kick off their second album (after 2019’s self-titled debut) at a blistering pace with drummer Torstein Lofthus threatening to destroy his kit in a savage fit of petulance, egged on by the hammering bass of Trond Frøne, and it sounds as though all hell is breaking loose in Athletic Studios, Halden in Norway. And yet not everyone is on the same page, as guitarist and composer Even Helte Hermansen finds room to settle into a jaunty melody, supported by Bernt André Moen on Rhodes. It’s almost like two songs overlaying each other, and yet Astrology (The One True Science) works somehow, resolving beautifully, the overall impression from this frantic opening salvo being that nothing is quite what it seems, or what you expected, and it sets the scene for more unexpected twists and juxtaposed styles as we venture further.

The experience of this quartet is considerable, combining talents of well known Norwegian progressive outfits such as Elephant9, Shining, Bushman’s Revenge and Grand General, and in Red Kite the emphasis seems to be on improvisation within a composed framework, and the chemistry is readily evident. Second track This Immortal Coil slows things down with doomy sludge riffing and menacing bass, combined with Chick Corea-style Rhodes explorations, and Red Kite stretch out unencumbered by expectation. It’s the sound of music emerging from a primordial swamp, dark and mysterious, and evolving into a delicious jazz behemoth. The interplay between Hermansen’s guitar and Moen’s Rhodes is both dark and joyful at the same time.

The mood is lightened somewhat as the title track drifts into view, an atmospheric slice of dreamy psychedelia. It sounds like it could have been recorded under a nigh time desert sky rather than in a Norwegian studio. Lofthus soon wakes us from our reverie however, as he again tries to thrash his reassembled drum kit into submission whilst Frøne pokes his bass into the wasp nest. Again it’s left to Hermansen and Moen to pick out a melody line over the busy rhythm on Red Kite Flight, which again marries frantic rumbustiousness with considered melody. Morrasol is the only non-original song, a cover of a tune by saxophonist Gisle Johansen, and a wonderful vibrant jazz metal workout which could be the highlight of the album. It’s certainly the longest track here, but merits every moment of its eleven-minute duration. The band’s musical empathy is particularly evident as they improvise their way through the piece, and I’m left breathless by the end. Fortunately, after the storm, Sleep Tight brings it down to a calm conclusion, albeit in a slightly weird and unsettling way.

So that’s it, a very satisfying album which manages to combine elements of metal, prog, psychedelia, jazz and ambient without sounding pretentious, stilted or covering well-trodden ground. Nice one, gentlemen!