Finding it tricky to find time either prior to the HRH Prog X at London’s Shepherds Bush Empire, as sustenance and makeup duties filled the morning, or after the gig as merchandise needed to be promoted and fans attended to in the foyer, TPA’s Rosamund Tomlins finally caught up with Franck Carducci again by email…

You said you think yours was the first European band to cross the Channel to perform in the UK after Brexit AND after the lifting of COVID-19 restrictions. How were all the new rules and procedures? What did achieving that mean for you as a touring musician?

In our case, the most complicated is the uncertainty of the situation! Booking a tour abroad is always a lot of work and preparation, all the logistics, accommodation, travel; all need to be arranged as soon as possible. Now, all this depends on a negative COVID test three days prior to your trip as well, not the most handy thing as you can imagine. Plus the additional costs of us all taking tests before travelling, AND organising and paying for tests for two days after entering the UK whether we were still going to be there or not, and you need to fill in a LONG passenger locator form. Then there’s all kinds of border control things that we didn’t have to do before Brexit that all add up again to some considerable uncertainty. 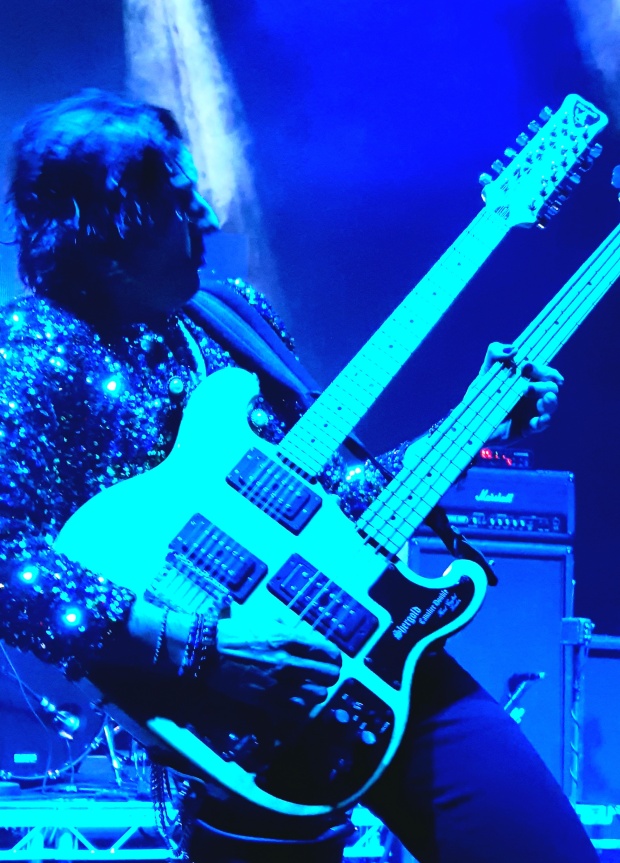 How was performing at HRH Prog at the O2 Shepherds Bush Empire and the O2 in Sheffield – were there differences?

Because of the quarantine needed to enter the UK, we really weren’t expecting to be able to play until they removed it (early August) and then we all got our negative COVID tests, and then we managed to cross the Channel – that all made these two shows VERY VERY SPECIAL! The Shepherd’s Bush Empire was obviously the icing on the cake because of its history, I MEAN, The Stones, The Who, Elton, Bowie, Billy Joel! Almost ALL my childhood heroes played there at some point. The vibe was amazing!!

You’ve so many glorious songs; how do you decide what to continue to play live and what to drop?

It’s tricky. It’s a bit like having to choose between your own children! We basically try to figure out what’s gonna work best live, what’s gonna entertain people the most, what’s gonna have a strong visual to it… but obviously each time you add a new song to the set list, you need to remove an old one. Luckily for us, some smart people invented medleys! 😉

You played a new song The Betrayal of Blue. It doesn’t seem that long ago that The Answer album was released; was the crowd-funding model a success for the efforts it took?

The Answer was released at the end of 2019, that’s just before the pandemic. So it seems a long time ago already, but if you consider the reopening of live music, then it’s like it was just yesterday. We didn’t have the chance to promote the album live the way I would have wanted to… but that’s the way things are, so we gotta keep moving on and creating new material. The last year-and-a-half was very inspiring for that! 🙂 Yes, the crowdfunding was a real success, since we reached 150% of our goal, thanks to our very supportive fans!

You clearly gained some new fans from HRH Prog, judging by the show’s reception and the Facebook posts, AND you take the time to speak to people after gigs, and welcome them online. How do you feel about doing the publicity side of things as well as the music itself? 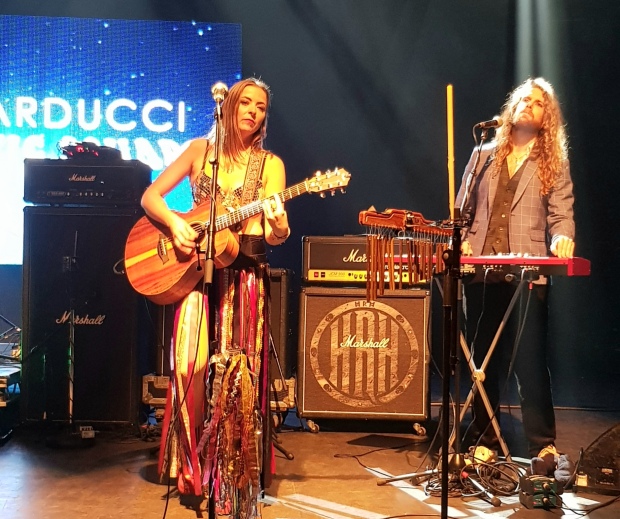 Did you sell the merchandise at HRH that you previously told me you had stashed in your luggage? I recall the massive queue for merch at the Cambridge Rock Festival in 2018 – was it easier to bring it in then?

Yes, but apparently we didn’t have enough new things this time, some people were complaining that they already had everything. 🙂

Who designs the striking artwork for the albums and the t-shirts? And you’ve produced useful bags too in the past – bags to carry our CD and t-shirt purchases in! Are those items all a bit expensive to produce?

It’s always a bit expensive when you produce small quantities but again, we don’t have brand distribution and media exposure that would be needed to sell more. Album artwork has all been made by different people. A lot of my artwork was designed by French artist Olivier Castan (aka Casoli) who also happened to be my keyboard player for 8 years!

How tricky was it to keep going during the pandemic lockdown periods? How did COVID-19 affect you? What did you do, as clearly you had to cancel and postpone lots of gigs? We saw some videos on Facebook, and your show without a live audience in France.

The day France went into lockdown in March 2020, we were supposed to board the ferry to Dover to start a ten date UK tour! After that, it’s been a year-and-a-half of ups and downs; postponing, (re)canceling, (re)scheduling… I’ve had lots of time to think things over, to try to find ideas to keep my audience entertained, doing online concerts from home, then from empty local venues and then finally in August 2021 real live music has resumed – and I do hope it will stay like this! In the meantime, I’ve been able to write about an hour of new music that still needs to be recorded.

You and the band have performed in London and in the UK before. I recall the first time I saw you, July 2018 in Tufnell Park, north London, at The Boston Music Room, with That Joe Payne doing what I think was his first solo gig in support.  When did you start coming over here to perform? 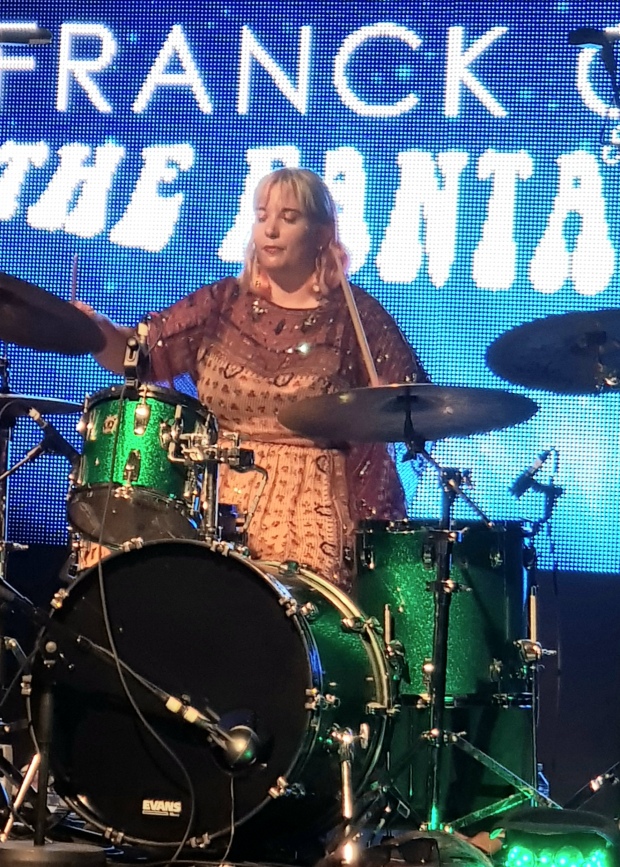 Aren’t your new musicians fabulous? Barth, Cédric and Léa. How did their joining you and Mary come about? You told me, and others, at HRH Prog 10 about Léa’s audition, could you tell it again here please?

Yes they are, young and fabulous 🙂 I auditioned them all to form a new, smaller band that we ended up calling The Fantastic Squad. Regarding Lea, she showed interest in joining the project so we auditioned her. I was 99% sure she wouldn’t get the job because obviously a shy girl dressed up like a princess with glitter all around – and I felt she was probably gonna be scared to hurt the drumkit while hitting it – was clearly not what I needed for a rock ‘n’ roll band… but as she laid into Led Zeppelin’s Rock And Roll, how wrong was I?!  As soon as she started to play, I was 99% sure she would get the job indeed! 🙂

You’re currently ‘Franck Carducci and the Fantastic Squad rather than The Franck Carducci Band; has the name simply changed with the line-up, or has there been a kind of reinvention?  Obviously fans came to love Olivier, Steve, Christophe and; Antonino, and perhaps their reasons for leaving might be personal, but could you say a few words about all that, and how their departures affected you and the band’s progress at that time?

In the beginning I decided to put up another band, smaller and more flexible, that would allow me to play more often, in smaller venues. The FC Band was not financially viable and some of the members were not willing to travel too far for gigs because of other work and family. So we decided to keep the Band only for occasional big gigs not too far from home, while I put up my smaller “Squad”. Turned out two bands was not realistic because the ‘small’ band is eating up all my time and we’re getting many more gigs – only our fourth gig was at Shepherd’s Bush Empire (HRH)! But who knows what will happen with the FC Band in the future; for now it is sleeping. 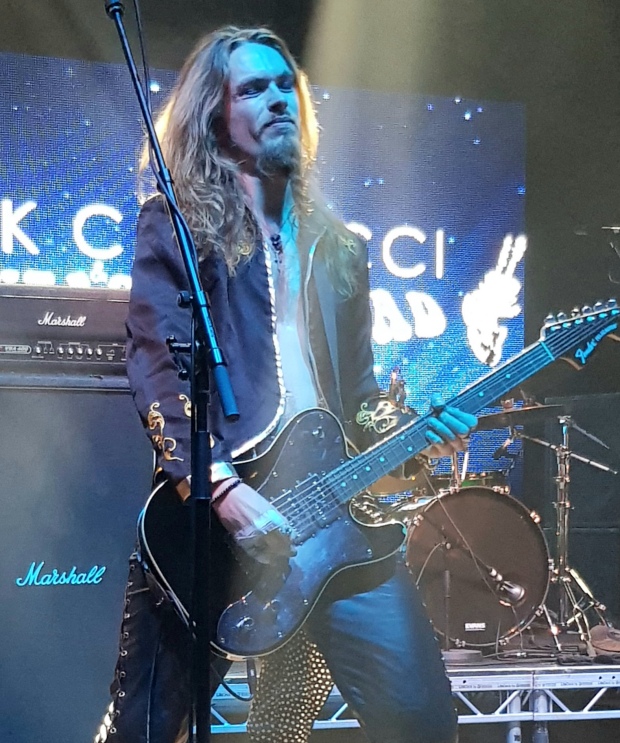 In particular there used to be six of you on stage, now five; lead guitar duties used to be shared but now it’s down to Barth. Has that affected the live shows and your writing in any way?

Not affected my writing as I don’t always use the same musicians live and in the studio. We had to re-arrange a few things and give up a few others here and there. Plus Mary is now on acoustic guitar duty every now and then in the show. I think we found the perfect balance to put on a great show while still being flexible and able to play smaller size venues. Barth has a lot of work indeed, but I think he’s doing a helluva job. 🙂

When are you next back here in the UK?

We will be back to the UK in March 2022 [for eleven gigs, see below]. I hope we’ll survive such an intense program, but hey, we’ve got a year-and-a-half to catch up with!

Do you have anything else to say to your admiring public?

Well, thank you all for supporting my little music project! I’m really glad you’re enjoying my music and our crazy shows! If you want to help us out, just spread the word about us, bring your friends to our shows, follow us on social media… (Facebook, Instagram, Spotify, YouTube… we’re everywhere!)
Rock ‘n’ Love,
Franck 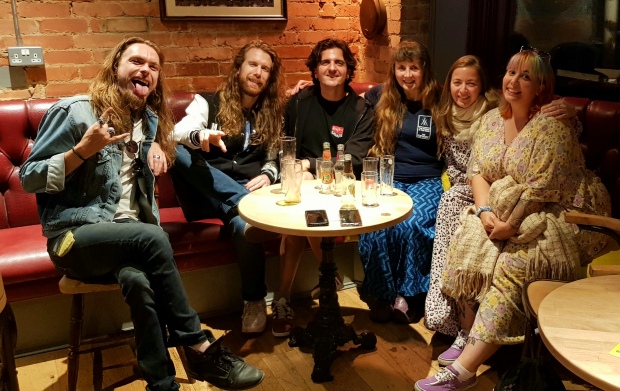