It was quite a strange sensation: only a few weeks ago I was strictly adhering to doctrine. I kept the requested 1.5 meter distance, wore my face mask and kept neatly and disciplined to (almost) all measures by the government. And then, suddenly, it is no longer necessary. While at the same time a rise in contamination is reported and the all-determining R-value is moving north of 1.0 again.

That is the backdrop for a Friday evening at Cultuurpodium de Boerderij in Zoetermeer. A long queue has formed in the cold outside air, more than an hour before the start of the Pink Project show. The line moves slowly, but it doesn’t seem to worry anyone. The usual check at the entrance has been doubled: not only is the obligatory QR code scanned but proof of identity checked, accompanied by an additional question. And the admission ticket, of course. The show by the group, hailing from nearby The Hague, is completely sold out, nevertheless the venue does not look overcrowded. Inside, the temperature is comfortable and the atmosphere is great, albeit a little timid. Will we soon be standing once again, shoulder to shoulder, dancing and singing along? And is it all safe? 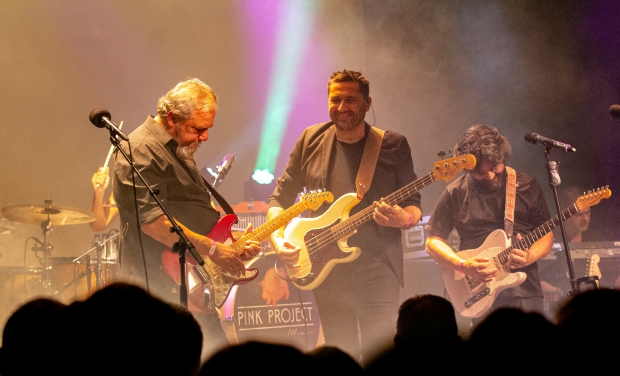 All those sometimes contradictory feelings soon disappear when the band takes the stage at a quarter to nine, a little later than planned. The theme of the concert series the band will perform in about thirty theatres in the Netherlands is ‘Past To Present’. In other words, from start to finish, a journey through the history of the legendary Pink Floyd. Pink Project is without a doubt one of the best Floyd tribute bands around, and that is no mean feat: there are truckloads of cover bands around, not only Holland but in almost every country around the world. Nevertheless, they can stand the test with the others, including Brit Floyd and the famous Australian Pink Floyd Show. They have been around for some three decades, during which they perfected their show to extremely high standards. 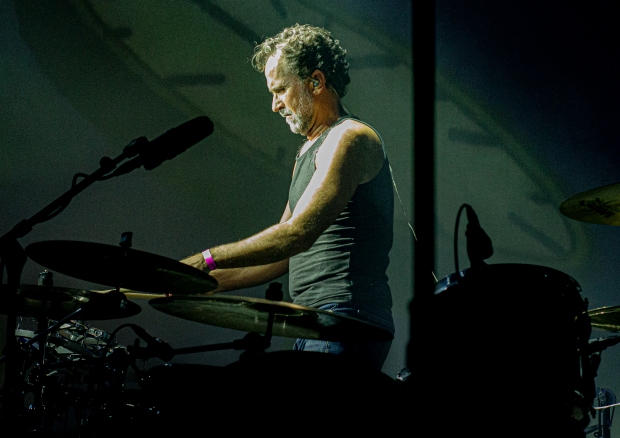 After a short instrumental intro, Arnold Layne is the well-known opening track. The sound is loud, a little too loud if you ask me. Especially the drums are dominant. The distinctive sound of the roto toms makes it appearance, Time is the next song on the set list. Singer Charles DeHue does his job skilfully. A surprise for many is a more than fifteen-minute long version of Atom Heart Mother, accompanied by video images on the big screen behind the stage. Us and Them should not be missed, of course not, the sax solo by the extremely popular Constantin Iliev is greeted with great enthusiasm. Another major surprise: an integral, more than twenty-minute-long rendition of the iconic Echoes from Meddle (1971). Thunderous applause is the rightful reward for the nine musicians on stage. They now have played for about an hour and it is time for a short break. 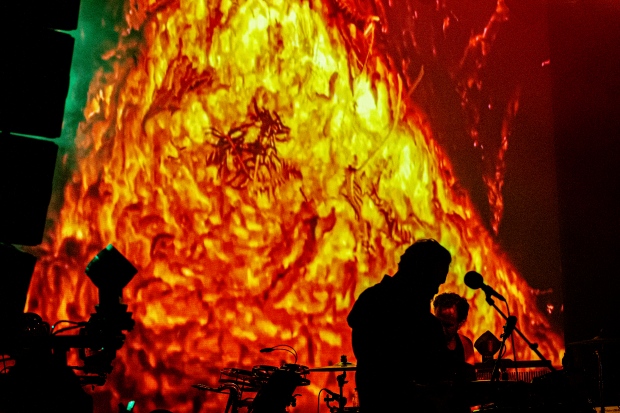 As with the original, video images play an important role during Pink Project’s performances. A complete arsenal of films is shown, including old material with Syd Barret during Arnold Layne, a lot of (Dutch) cows during Atom Heart Mother and boiling lava streams, unfortunately very topical at the moment, plus images of the concert at Pompeii, during Echoes. The band is in excellent shape, experienced and relaxed they work their way through the complex repertoire. 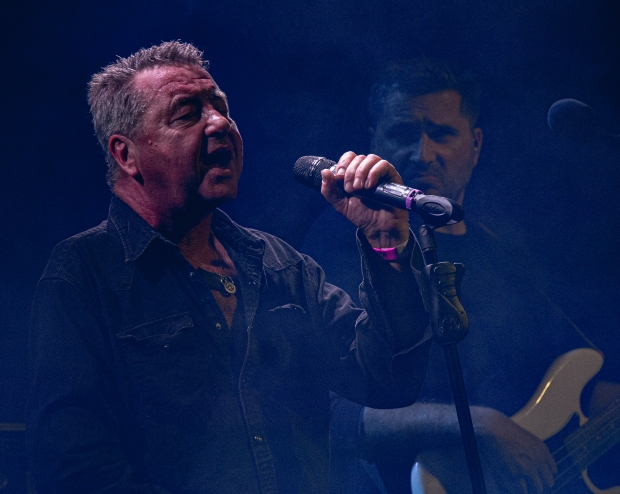 The sound is just a bit too loud, unfortunately, the bass drum occasionally drowns out the sound of keyboardist Giovanni Pepe. On the other hand, lead guitarist Ruud Verwijk’s instrument is very pronounced in the mix, as it should. There are relatively few songs in the set list with Roger Waters’ lead vocals. After the departure of founder/vocalist Peter Chatellin, this particular job is vacant. Although Chatellin’s typically maniacal vocals are missing, guitarist Verwijk does his best to take care of those difficult vocal parts, for which we pay tribute.

Arjan van Iperen’s drums are tight and loud, the sometimes even three-part vocals are crystal clear, however, backing vocals could have been a little more audible. Bassist Jason Waasdorp does all the introductions, meanwhile nervously picking away at the microphone stand.

The second part of the show starts with one of my all-time favourites, Sheep from Animals (1977). A formidable performance follows, inches of goosebumps, an absolute highlight. The predominantly acoustic Wish You Were Here is dedicated to all victims of the pandemic, the solo is played by second guitarist Hans Hendrik. 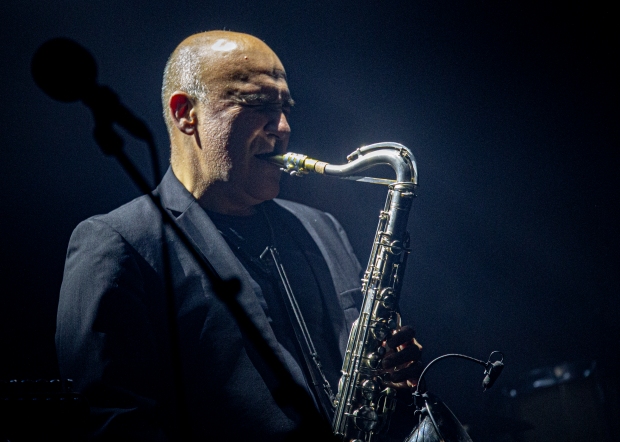 The driving bass is key in Sorrow‘s heavy sound, while in the relatively unknown The Gunner’s Dream, from 1983’s The Final Cut, Iliev’s saxophone steals the show while Ruud Verwijk’s vocals come eerily close to Waters’. Brilliant images accompany the sound on stage. Once again, Verwijk features in a leading role during On the Turning Away and produces, in my honest opinion, the best guitar solo of the night. After the dark and menacing Dogs Of War, the well-known pairing of Brain Damage and Eclipse from Dark Side of the Moon marks the end of the regular set, after just under two hours.

The band leaves the stage for just a few moments (why?) to return almost immediately for the encore. In this case See Emily Play and Bike, the drums sound way too loud. These are fragile psychedelic songs, there is really no need for a show of strength here.

At any Pink Floyd tribute band, one song should never be missing: Comfortably Numb is the grand finale of the show with a truly phenomenal solo by Verwijk. Against a backdrop of images from The Wall movie and live images of his greatest idol, David Gilmour. 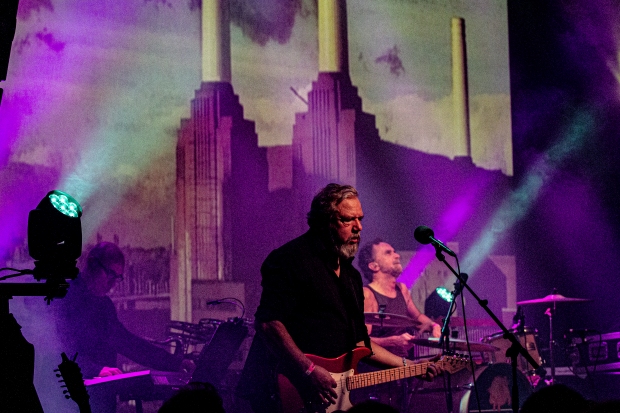 After two hours and ten minutes, it’s all finished. No songs from The Division Bell this time, too bad, but no Money, Shine On You Crazy Diamond or Another Brick In The Wall either. Choices have to be made. Despite this, the audience returns home visibly satisfied. Especially after Waasdorp’s promise that in exactly one year (please make a note in your diary) the band will once again visit Zoetermeer. It was a true joy of recognition, and at about a quarter past eleven everyone disappears into the cold night, on their way home.

And what about those mixed emotions I mentioned at the start? I didn’t stop to think about it for one second. As if nothing ever happened.