Swansea is a hotbed of many things, but currently not appearances by touring artists, sadly. It has been ages since I’ve been to a local gig, so a visit by guitar wizard Jon Gomm is a must see, and it’s off I go for my first Saturday night out in Swansea in even longer! 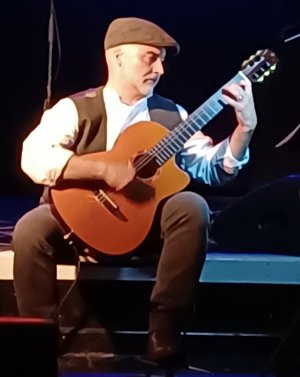 Upon arrival in Sin City’s smaller upstairs room, classical guitarist Duncan Leigh (from Carmarthenshire) is already playing his support set. Seated on the lower level at the front of the stage, Duncan covers a wide ranging repertoire with skill whilst entertaining between songs with a comedic line in banter. His choice of covers is entertaining, taking in Oasis’ Wonderwall, which proves itself to be well suited to this kind of treatment, and a studiously tongue-in-cheek reworking of the Teletubbies theme that went down very well, complete with the addition of appropriate headgear at the end of the set. I particularly liked the lengthy and dark piece referenced as “Weird Shit”; right up my alley! A good start to the evening and I’ll be looking out for Duncan in the future.

Jon Gomm is in the early stages of a tour to support his fourth album, The Faintest Idea, that will take him all over the country before ending in December.

Playing barefooted, Gomm eases in with the relaxing Cocoon from the new album, his virtuoso technique immediately startling as he plays his signature Ibanez acoustic guitar with a hypnotic swirl of two-handed tapping, harmonics and detuning, plus percussive rhythms from the instrument’s body, to produce a one man orchestral sound that supports his sweetly soulful voice. It’s simply jaw-dropping. I’ve seen many superb guitarists playing in any number of styles, but I’ve never experienced anything quite like Jon Gomm in full flight. But it’s not simply a display of technique, the songs are the key and the dexterity is delivered in full service of them to build a sound world all of his own.

It’s difficult to pin him down and he isn’t easy to categorise, which is very refreshing but must cause him some problems in that the usual outlets for acoustic guitarists, be it folk or jazz clubs or whatever, seem somewhat alien. This is accentuated by his perhaps unexpected choice of covers, including a funky version of Chaka Khan’s Ain’t Nobody (originally rendered, says Gomm, to placate irate Scotsmen who wanted something to dance to) and an excellent re-working of Erasure’s A Little Respect, which got the audience singing along. He even throws a portion of Kate Bush’s Running Up That Hill into his own Everything. 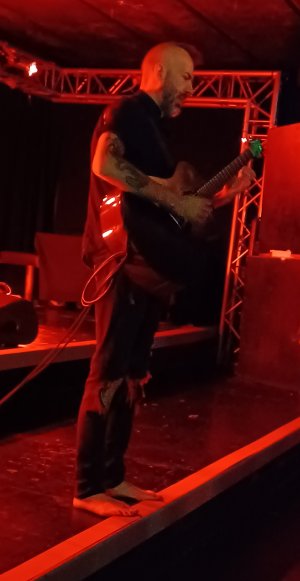 The set is, of course, largely built around his original material, which is sinuous and engaging. Watching him play is a mesmerising experience that left me wondering just where all the sound was coming from. As a helpful explanation he led a semi-spoof tutorial on how to wrangle noises from a humble acoustic guitar, starting with the drums: kick drum, then snare, toms and hi-hat, before adding bass, vocals and, oh yeah, guitar to build up the full sound, compellingly massaged by subtle effects and reverb. It’s a melodic whole that weaves a web in which listeners are all too easily ensnared.

Perhaps most important is the deeply personal nature of many of his songs, such as The Ghost Inside You, and he goes through the mill ringing the emotion out of them, frequently looking completely drained at the end of a piece, so intense are the feelings and memories that come into play as he delivers them. He alludes to the stories behind some of them, but even that seems painful, the opening of his heart and soul balanced by a natural wit and engaging personality that comes through between songs.

All of the songs seem to stem from a deep place within him, and aside from the more personal topics, he is inspired by injustice and political incompetence, a special place in hell being reserved in Dream Factories for the judgemental marketing exercises and ratings grabbers that are shows like X Factor, where young talent is often cruelly diminished and cast aside. The audience, sharing the sentiment, need little encouragement to sing along with the refrain “Burn, burn, burn, burn, burn the factories down!”.

Jon’s breakthrough number from ten years ago, Passionflower is a crowd-pleasing end to the set proper before he sends us on our way with another personal song, written by a close friend who recently took his own life. The twinkling Song For A Rainy Day is delivered quietly and unplugged from the front of the stage in a beautifully intimate end to what has been an often deeply moving and always absorbing set.

I am frequently astonished at the lack of support or interest afforded to stellar musicians, and Jon Gomm is a prime example. Under the current circumstances that might not be surprising, but tonight’s audience of no more than thirty did what they could to create a warm and encouraging environment. It is always disappointing that such talent remains quite such a secret. Gomm should be playing to far more people and his skills more widely recognised as his material is highly accessible. It must be disheartening for him, but even with so few people coming out to listen in what is a fairly large city, he can rest assured that he made a number of new converts with this performance. Every little helps. Even if you’ve never heard him play a note, you would do very well to do catch one of his upcoming shows. 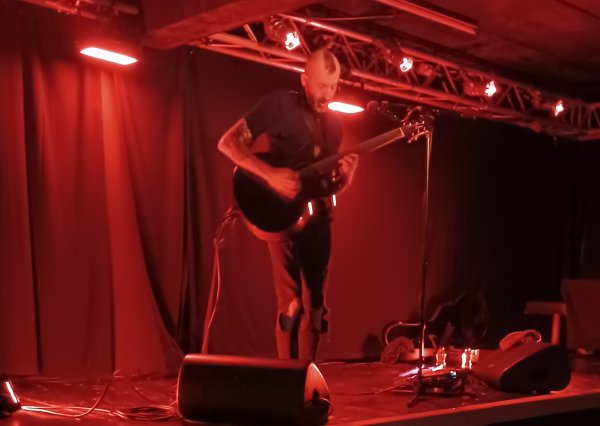