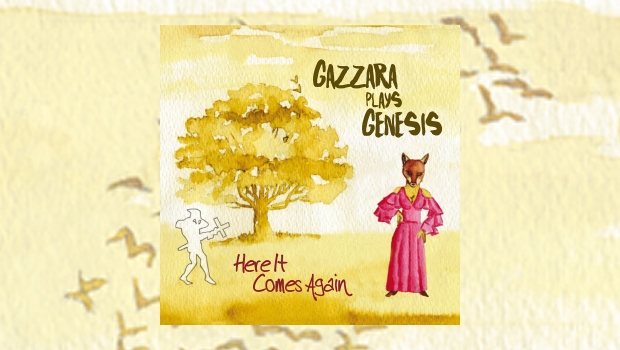 This disc has been waiting on a pile of others for quite a while. I ran into the album over a year ago with the idea of dedicating a review to it. However, due to various circumstances, so far it has not happened. But I have to be honest: the lack of topicality of the material and its ‘special’ character did not necessarily make it my first priority. Moreover, I had the feeling that I was dealing with something of a curiosity. Time to reveal what I’m actually talking about: it’s Italian pianist Francesco Gazzara who (once again) has compiled an album with purely instrumental covers of Genesis songs. In early 2020, he released the follow-up to a double album from 2014, Play Me My Song, entitled Here It Comes Again, just like then, under the moniker Gazzara Plays Genesis.

What exactly are we to expect? In fact, the result is not too bad, not bad at all. Not just another tribute band like The Musical Box? On the contrary. (Almost) no guitars, mostly acoustic piano music with here and there some other instruments added. No vocals either, as mentioned, Gazzara fills that gap by replacing the lead vocals with (grand) piano playing. This occasionally results in surprising pieces of music. He also chooses to stay as close to the original versions as possible, with a few exceptions. The choice of repertoire is also somewhat surprising; not just the obvious classics like The Musical Box and The Carpet Crawlers but also a full 23-minute performance of Supper’s Ready (!) and lesser known post-Gabriel material like Undertow, Heathaze and Guide Vocal. A total of ten songs are featured, clocking in at approximately 71-minutes, all produced and arranged by Gazzara’s skilful hands.

I once witnessed something similar live in the form of a Dutch couple who interpreted Mike Oldfield’s music purely on keyboard instruments. But whereas in the latter case it was something of an oddity, I would be doing injustice to Francesco Gazzara if I were to put him in the same category. The respect and love with which he treats the well-known songs is clearly noticeable. These stripped-down and almost acoustic versions once again make clear how strong the compositions and especially the melodies of the English pioneers of the genre were. Subconsciously I hear myself singing along to the melody of the piano, don’t worry, inaudible to my surroundings. And as much as the execution of the songs is faithful to the original, my favourite track is Heathaze, from the underrated Duke. The improvisation that saxophonist Dario Cecchini puts into his playing gives the song a completely new meaning, without affecting the original – kudos.

Not only can we hear some brilliant piano playing on Play Me My Song, in some cases the cello (Afterglow), violin (Eleventh Earl of Mar), flute or clarinet are featured instruments. And that sounds truly amazing. I think I can even hear some guitar playing in The Carpet Crawlers, but it never goes beyond accompaniment. The artwork, clearly inspired by Foxtrot, Wind and Wuthering, A Trick of the Tail and Duke, among others, also deserves an honourable mention.

So no curiosity, this Francesco Gazzara. He also appears to be successful in performing this music live, as can be seen on his website. I doubt whether there is actually any added value to the new album, but Play Me My Song is definitely worth a listen, if only as an ode to the great music Genesis (once) produced.