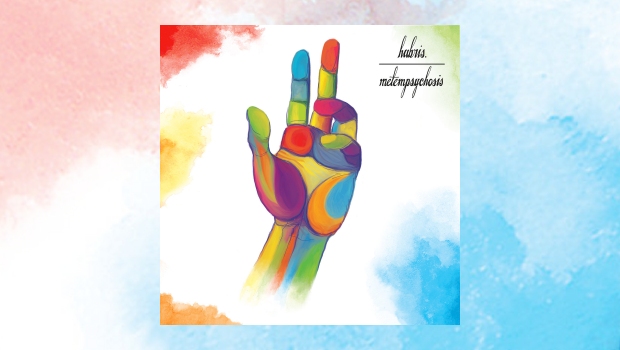 One of the best things about following a label is being introduced to new bands. Metempsychosis is not the first album hubris. have released, but it is the first I have heard – and I’d likely never have heard it were it not released on Art As Catharsis. That was its first tick of my boxes. The second was the gorgeous cover art, the third was the track titles, as I’ve always loved classical history and mythology. So I’ve not even listened to a single note of the music, and I’m already in a terrific state of mind.

The first hurdle is to find out just what “metempsychosis” is. Turns out it’s a term from Ancient Greek philosophy, referring to the transmigration of the soul, especially its reincarnation after death, first coined in the set of religious beliefs and practices known as ‘Orphism’ (after its legendary founder, Orpheus). In a way, then, it’s interesting that hubris. have not given us a piece under that name.

Instead, we begin with Hepius, which may seem an oddity, but so wonderfully sequenced is this album that I am in no doubt it is deliberate. Hepius is a hero who became a god of medicine, better known by his later name of Asclepius. The twin snake-entwined staff of Asclepius remains a symbol of medicine today. In these days of the novel coronavirus, Hepius would be a handy person to have around!

In one of many links to other tracks (by name, if not always by music), Hepius/Asclepius was tutored by the centaur Chiron (Dionysus and Heracles were also tutored by Chiron, and Heracles ultimately was responsible for Chiron’s death). I can’t help but imagine the introductory beat to be Chiron’s hooves, as the music magically rises over it. The music is as peaceful and relaxing as you might expect from a healer, and continues to quietly build in power – just as Asclepius did.

Indeed, Asclepius became so proficient as a healer that he surpassed his father, the god Apollo. Ultimately he was able to evade death for himself and others, and also to bring the dead back to life. This wasn’t as great a thing as it might seem, as suddenly there was a huge influx of people, and Zeus resorted to killing Asclepius to restore balance. In my mind, this killing blow takes part approximately five and a half minutes into the track, and after this crescendo, we return to the initial calm to see out the track.

Next up is Dionysus, and just as Asclepius had his staff, so too did Dionysus – although his was of fennel, wrapped in vine leaves. Dionysus is a much more upbeat number than Hepius, as I guess you might expect from a god of revelry. It’s almost disco-like for the first two minutes, before the first of several changes, and I can’t help but think this is a reference to the Mysteries of Dionysus (if we head back to Orphism for a moment, Orphics revered Dionysus, and it was Orpheus who was said to have invented the Mysteries of Dionysus – rituals using dance, music and alcohol, to remove inhibitions and social constraints. Certainly the music here encourages the body to dance – or at the very least, the toes to tap).

Similar to Hepius, there is a dramatic change in intensity about halfway through Dionysus, and just as in Hepius, in my mind, this is down to Zeus, for just as Asclepius was first known as Hepius, Dionysus was first known as Zagreus – although a key difference is that Hepius and Asclepius were the same incarnation, while Zagreus was the previous incarnation of Dionysus. Zagreus was the product of one of Zeus’s many infidelities, and as usual Hera wasn’t too happy. She was responsible for his demise, and Zeus retaliated in a fury.

And then we’re back to Apollo, because just as he was the father of Hepius/Asclepius, he was responsible for the reincarnation of Zagreus as Dionysus. After the fury, we have the calm, because as much as Dionysus has been characterised as a god of drunkenness in the post-Classical era, contemporaneously Dionysus was associated with only a moderate consumption of wine, which could ease suffering and bring joy. Even the “divine madness” of the Mysteries of Dionysus are quite distinct from drunkenness.

Now, I realise that I could be entirely wrong in my imaginings of what the music symbolises, but such is the power of instrumental music that imagery can be quite clear in a listener’s ear, even when it is not that which was intended. I have often believed that instrumental concept albums can convey a story far better than one with vocals. Rivendel’s recent Sisyfos album is another with a classical concept where I was able to easily envisage the story being told, even though there were no vocals. I was amazed by Rivendel’s accomplishment, and hubris. have provoked a similar reaction. I honestly do wonder how much difference it makes to listen to these pieces of music, fitting knowledge to the music, than if one knows nothing of the mythology?

I also wonder how I can be writing what is probably my most wordy review yet for an album largely without words. I would apologise, but all who were bored would have given up long ago, so I can only assume if you’ve read this far, you’re finding my wittering at least vaguely interesting. Or perhaps, you are no longer the same incarnation you were when you began?

Adonis is next, another classical being who visited the Underworld and survived. Raised by Persephone, Queen of the Underworld, once he reached adulthood he spent one-third of each year in the Underworld. This track is the most laid-back yet, and as dreamy as one might expect from the McDreamy of the ancient world (sorry, my wife watches Grey’s Anatomy, and I guess I can’t help but absorb some of the references). Well, at least until the gruesome death, as Adonis is gored by a wild boar. After this suitably dramatic and heavy section, we are left with two minutes of melancholy, as the tears of Aphrodite mix with the blood of Adonis, leaving us the beauty of the anemone flower.

Boars quite often feature in classical mythology. Our friend from the first track, Asclepius was among those who took part in the Calydonian Boar hunt. The brother of Heracles, Iphicles, also took part. Heracles, of course, vanquished a boar of his own – the Erymanthian Boar.

But before we get to Heracles, we have Icarus and Dedalus. Icarus is the only track on Metempsychosis to have vocals, though they are spoken, not sung as the tale of Icarus and Dedalus is narrated. It’s so well known that I don’t think I need to retell it, however it is worth noting that Icarus’ father warns him first of complacency (flying too low), and then of hubris (flying too high). I love the way the calmly narrated story matches the ambient nature of the music, each somewhat expressionless and monotonous yet beautiful.

When Icarus segues into Dedalus, it’s one of the most beautiful moments of the album. The music of Dedalus chops and changes like the pathways of his labyrinth, and provides one of the most breathtaking pieces on the album. A definite highlight, even though I’m not totally sure how the story of Icarus and Dedalus fits into the overall arc of metempsychosis. For my own peace of mind, the jigsaw piece that fits them together is that it was Heracles who erected a tomb for Icarus, and Heracles who killed the Cretan Bull (father of the Minotaur).

And this is where I feel, even if it is only by my own inference, that the sequencing is amazing. Not only does every track lead perfectly into the next musically, so that the album is one whole listening experience, so does everything in terms of the classical figures the tracks are named after. Just as Asclepius held a staff entwined by two snakes, and started us on our journey, we end it with Heracles, who when he was just eight months old killed two snakes – strangling one in each hand (the two snakes were sent by Hera to kill Heracles and Iphicles because, once again, Zeus had been up to his usual naughtiness).

As per the Bandcamp page for the album, Heracles “is divided into twelve parts alluding to both Heracles’ labours and the different stages of his life, the last two being musical illustrations of his rise to Mount Olympus and his place among the gods until the end of times.” This is clever in itself, as Heracles was originally given only ten tasks, and it was the additional two which not only saw him granted the immortality Asclepius was denied but also saw him have to visit the Underworld to do so. In so many ways, Heracles completes a circle for Metempsychosis (the album), just as life and death are a circle in metempsychosis (the theory). It’s a glorious way to end the album, but it’s not really an end, because you can go straight back to the start, and play it again…

I realise I’ve said less about the music than the figures named by the track titles, but that’s how vivid a story the music portrays for me. hubris. remind me at times of Long Distance and Sigur Rós (both bands I love), but they paint far more colourful pictures. The artwork for Metempsychosis doesn’t lie, and I can’t help but close my eyes and envisage the stories I studied at school to an entirely modern soundtrack. If you’re not such a classical fan as me, your experience may vary – but I’m sure it would be impossible not to recognise the beauty of the music.