A few months after the release of the new studio album Lies and Butterflies, the successor to the extremely successful Delusion Rain from 2015, the Canadian progressive rock band Mystery returned to the Netherlands for what would be their last concert of the year. A year in which, among other things, a successful gig during the annual Night of the Prog festival in Germany featured as a highlight.

The performance takes place in their self-proclaimed second home, the Zoetermeer prog-temple De Boerderij, where the band has recorded a live CD/DVD twice before, most recently during the Progdreams V Festival in 2016. The result was released last year, appropriately entitled Second Home – Live At Progdreams V, an extremely enjoyable document for any true prog fan. The stage was once again crammed with expensive video recording equipment, thirty cameras, keeping the experienced crew under John Vis, also responsible for the aforementioned live DVD, extremely busy. Who knows, maybe this performance will also find its way to consumers at a later stage.

The band is proud of Lies and Butterflies, which was played in full, albeit not in the original order. Although it is a cold, frosty November night outside, inside it feels more like a Turkish bath with about 600 people attending, including a relatively large number of ladies. An extremely enthusiastic audience too, as always there is loud singing in response to what is happening on stage. The sound is good, although sometimes the switch to the soloing musician is not quite on time and the keys sometimes get lost in the mix (because of the dominance of heavy guitars?).

Mystery kicks off with Looking for Something Else, the seventeen-minute opening track of the new album. The band is in good shape, the possible recording of a new live album might help. The Scarlet Eye from 2007’s Beneath the Veil of Winter’s Face is next, complete with masked Pageau and keyboard solo on his portable instrument. The rocking Come to Me and Willow Tree complete this part of the show. 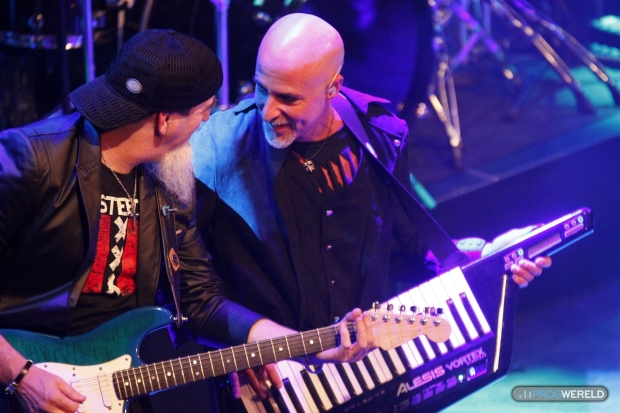 It takes a while to find Pageau who accidentally left the stage just before How Do You Feel? Luminous coloured sticks are handed out to the audience to increase the atmosphere, it gives the song an extra dimension. Shadow of the Lake, from the Destiny album, released twenty years previously, provides a hilarious moment: Pageau is dressed as the Phantom of the Opera, his mask covers his mouth so he has to slide it up to make himself heard. Top drama complete with unison guitar duet. Then it is time for an approximately twenty-minute break, the musicians have now played for more than one hour and ten minutes.

Drummer Jean-Sébastien Goyette, with his mighty blows, forms the backbone of the band, together with bassist François Fournier. Since his first performance with Mystery in February 2013, Goyette has now occupied the stool behind the drums exactly fifty times, a small anniversary. As before, he addresses the audience afterwards to thank them emotionally and to emphasise once again how much the band feels at home in Zoetermeer. 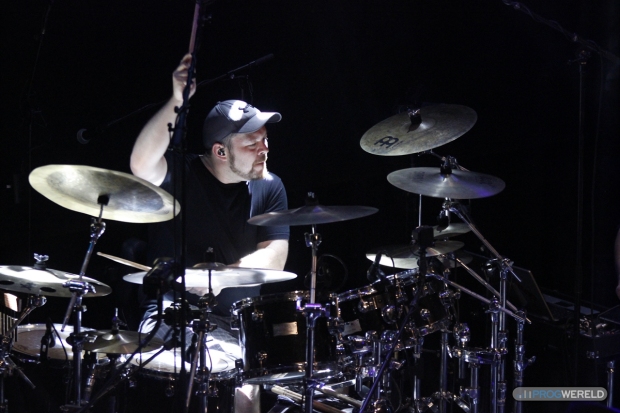 His bassist ‘brother’ Fournier (Goyette and he are starting to look more and more alike, although Fournier still has a few kilos head start) this time plays not just four but five strings. It hardly makes any difference: with his funky but above all rocky bass playing, background vocals and announcements, he is an important part of the band. And what about that Moog Taurus act? 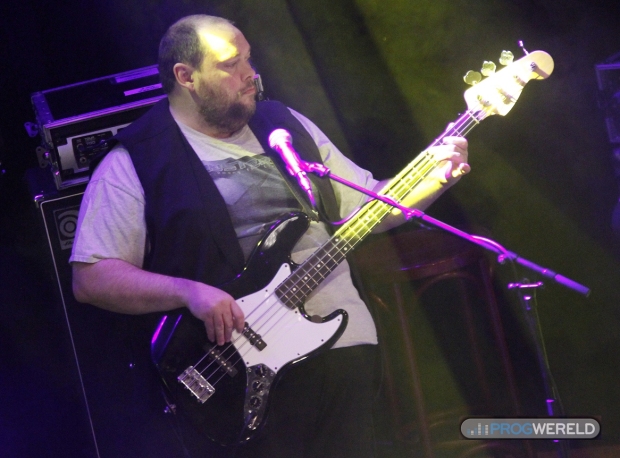 Initially I thought that playing second guitar with Mystery doesn’t amount to much, but that Sylvian Moineau can play is beyond question, especially apparent when he is allowed to feature on solo guitar at some carefully chosen moments. Adorned with red bandana and sunglasses (?!) on top, he is the man with a high dose of showy moves in his stage presentation, just behind Pageau, we take his frequent rock poses for granted.

Relative newcomer, only aboard since July 2016, Antoine Michaud looks like a neat-faced law firm intern. This ‘one-armed bandit’ plays most of his keyboard work with only one hand, but was unfortunately low in the mix so that his contributions hardly stood out, despite the overdose of passion he puts into his playing. Not bad for someone who is actually a guitarist. 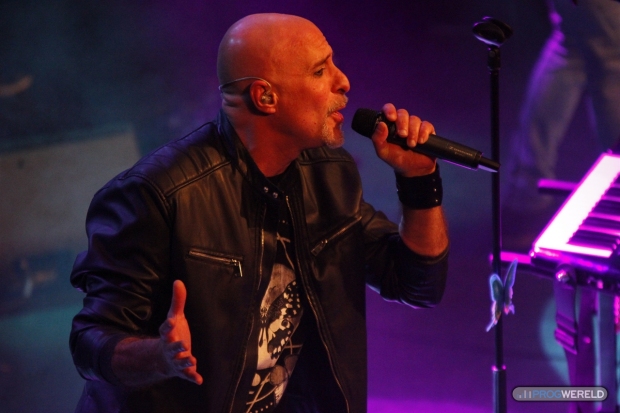 Singer/frontman Jean Pageau is a versatile musician, who contributes to the overall sound of the group as a singer, flautist and keyboardist. With his portable Alesis Vortex keyboard, bald head and theatrical presentation, he sometimes resembles a mini version of Saga-vocalist Michael Sadler. I read somewhere that Pageau is also a big Saga-fan and that he first saw Mystery perform in 2012 as support act for the famous Canadian power-prog quintet. He really knows how to work the crowd with his sense of drama and dressing up, all the while making eye-contact with the fans in the front rows. Extraordinary, by the way, these days you hardly see a singer who features on the most important keyboard solos.

Between all those extravagant personalities, band leader/composer/guitarist Michel St-Père is tranquillity and modesty embodied. No fuss from this master on six strings, baseball cap backwards as usual, Amsterdam T-shirt underneath his jacket and with his lyrical playing with long notes, the undisputed musical highlight of the evening. How on earth does he get that great sustain from his instrument?!

The show resumes around ten o’clock with a truly excellent rendition of Delusion Rain, the title track from the 2015 album, for the fans, clearly a crowd favourite. Two ‘dreamy’ songs follow, Dare to Dream flows seamlessly into Where Dreams Come Alive, in the last song Moineau plays his heart out. We are then presented with excellent versions of The Sailor and the Mermaid (“I sailed away for a thousand years”), Wall Street King (“the money keeps coming in”) and Pride, with wonderful bass lines and furious drums. 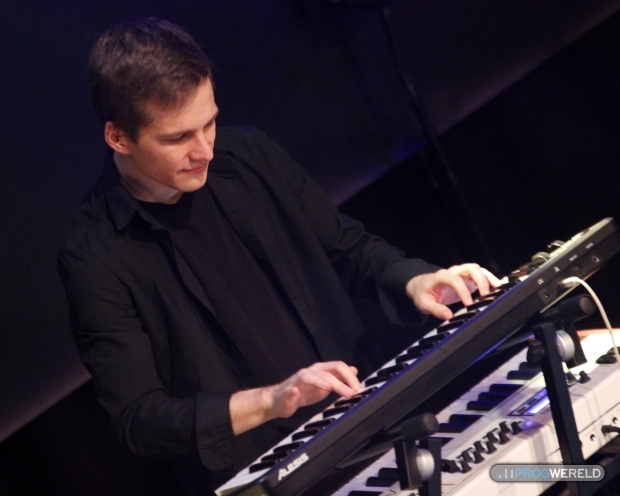 Something to Believe In is preceded by a short introduction to the threat of (near) missed flights from Toronto, while Travel to the Night shows singer Pageau’s balcony scene, performing among the audience on the first floor, where Neal Morse once preceded him. A Song For You is an ode to ‘second home’ de Boerderij, the switching between keys, flute and vocals is not entirely flawless. The latter does not apply to Fournier’s hand-played ‘Moog light’ bass solo, a funny interlude. At the end of the second set, after an ultra-short break, the entire band quickly returns to the stage for an extensive encore.

The ultimate prog song, the closing track of the new album, Chrysalis, has been elected as first encore. We get to hear a rousing version of this fifteen minute prog hymn, with Pageau in a ridiculous black outfit with cape and butterfly mask, a bit reminiscent of the costumes from the fake superhero series Kick Ass. Too bad, it detracts somewhat from the great live version of this song. Who is going to tell him that he should never, ever do that again?! The Preacher’s Fall is the more or less traditional closing of the show, rocking wonderfully with brilliant unison guitar playing. After more than two-and-three quarter hours, the band gratefully receives the enthusiastic applause from the audience. 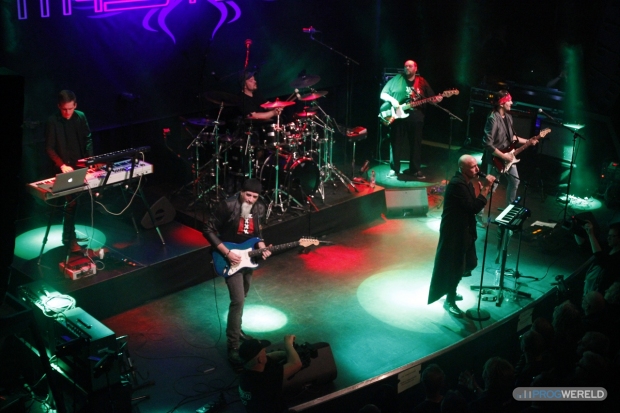 In a live setting, the band sounds much heavier than on the studio albums, which is clearly noticeable. A number of times during the performance, the warm bath, the home away from home De Boerderij has become for them, is brought to attention. There’s no doubt that this is a home game for Mystery, fans have come from far and wide to attend the show, the parking lot is teeming with foreign license plates.

The sympathetic Canadians have built a fanatical international following in recent years, a bit like Marillion but on a smaller level. Just like the British, they believe contact with the fans to be extremely important, which is expressed by returning to the foyer with the entire band immediately afterwards for photos, autographs and a chat, an excellent initiative. They can now confidently return to Canada. It’s been an excellent year.

[TPA would like to extend our thanks to Ron Kraaijkamp of Progwereld for the images used in this article, and you can read Alex’s review of Mystery’s Caught in the Whirlwind of Time live release, recorded at this show, HERE.]

SET LIST
Looking For Something Else
The Scarlet Eye
Come to Me
Willow Tree
How Do You Feel?
Shadow of the Lake
Delusion Rain
Dare to Dream
Where Dreams Come Alive
The Sailor and the Mermaid
Wall Street King
Pride
Something to Believe In
Travel to the Night
A Song for You
~ Encore:
Chrysalis
The Preacher’s Fall