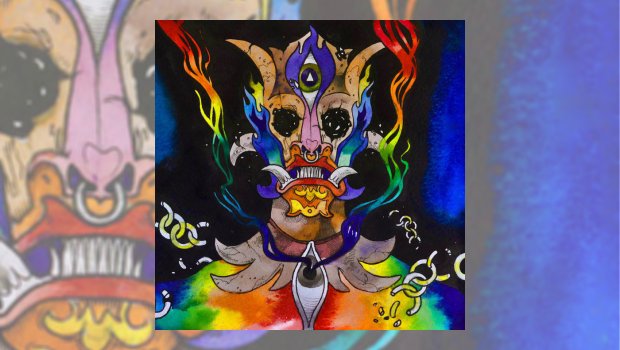 I wouldn’t normally write a full review for an anniversary release. It just feels wrong to me to be taking the space that a new album could be given. Anniversary releases are for A Different Aspect. But there’s something about this 10th anniversary release of Ukrainian band Ethereal Riffian’s Shaman’s Vision that demands my attention. Add to that, the fact that a lot of people probably missed this album the first time around, so I feel a can make an exception here. Shaman’s Vision is a slab of primordial sludge and doom that is as psychedelic as its cover art. And there’s certainly more to it than most sludge and doom bands. They remind me quite a bit of Hawkwind, or even Jefferson Airplane, as well as the experimental doom sounds of bands like Green Carnation. The band is more meditative than metal, so the heaviness of their music comes more from atmosphere than intensity.

The Shaman’s Vision is effectively one long-form piece, despite being tracked in five parts. The whole is deeply routed in rhythm, as you’d expect from a Shamanic piece of music. It’s hypnotic and mesmerising, taking the listener on a journey that has more twists and turns than you might expect. Always fresh, always exciting. At times, the music is stripped back to an almost ambient presence – apart from the ever present rhythm of Nikita Shipovskoi – and at other times scorching riffs scream in from nowhere in blasting metallic shrieks. The tempo ebbs and flows, the music is dynamic and expansive, and it’s just such a gloriously sequenced suite that it’s impossible to lose interest. It’s a relatively short album that leaves you wanting more, and in this instance, the 10th anniversary edition certainly delivers with a live performance of the entire album (on the second side of the cassette, if you choose to purchase the physical product).

I love everything about this album. I love the short instrumental opening (Part I) with its subtle percussion and gently swirling guitar, before more intense drumming kicks in, but still slow and lugubrious. Some fuzzed out guitar leads us into Part II, with its intoned “aum”. This is more what people might expect to hear from a sludge and doom band. The variations between and within parts of the suite are often quite subtle, but each part has its own sound so that I never feels lost on my shamanic journey. I’m not falling down the rabbit hole, so much as abseiling. This might be a trip, but it’s not a bad one by any stretch of the imagination. I imagine Part II might well be a highlight for sludge and doom fans, but it’s probably my least favourite track as it’s the most straightforward. I still very much like it, though. Remember, I said I love everything about this album!

Part III is absolutely the centrepiece of Shaman’s Vision, and one of my favourite sections of the suite. The core quartet of Ethereal Riffian is augmented by some beautiful and haunting flute (and later vocalisations) from Olga Prudey. It’s as groovy as anything else on the album, but it’s the chillest groove yet. Intimate and inviting, it simply carries me away. I think one of the reasons Shaman’s Vision is so immersive is because it is largely instrumental. Often, if a voice is present it is in the form of vocalisations rather than vocals. Even when Val Korniev sings, it is in a subdued, ritualistic chanting style. In fact, this sort of subtlety and shamanistic vibe exists throughout the instrumentation too, meaning everything serves the album as a whole, resulting in there being no real standout tracks; the album really does have to be listened to as a whole.

Two thirds of the way through Part III, one of the heaviest passages of the album bursts into being, and it’s fantastic. Part IV follows in uptempo fashion, with a short and sweet slice of sublime sludgy stoner shuffle. Too much of this would be wearing for me, but it doesn’t even come close to wearing out its welcome, as it segues into Part V, the longest track, and gloriously so. It sounds like Pink Floyd meeting Black Sabbath and slowly grinding each other into some hallucinogenic paste or primordial ooze. Add to that mix lashings of fuzz and leave to slowly simmer. Beautiful! It probably comes as no surprise that this is my other favourite section of the suite.

But the best is yet to come! Yes, the studio album is wonderful, but the live performance takes Shaman’s Vision to the next level. Everything sounds more vital and impassioned. Korniev’s vocals, especially, are so much more impressive. Part II, which you may remember was my least favourite track on the studio version, blows me away live. And there are extra treats, too. I love the addition of didgeridoo (played by Yaroslav Kaminskiy)! Unlike the studio version, there are more explicit breaks between the tracks, because they are taken from two performances in 2015 in order to provide the Shaman’s Vision album in full and in order. As much as I normally hate cut and paste live creations like this, and as much as I might have liked to hear a full concert, I can certainly appreciate the way Shaman’s Vision has been presented here. And Part V still rocks, so I can excuse anything after that superb closing number! If you missed out on Shaman’s Vision first time around, make sure you don’t miss out again now.