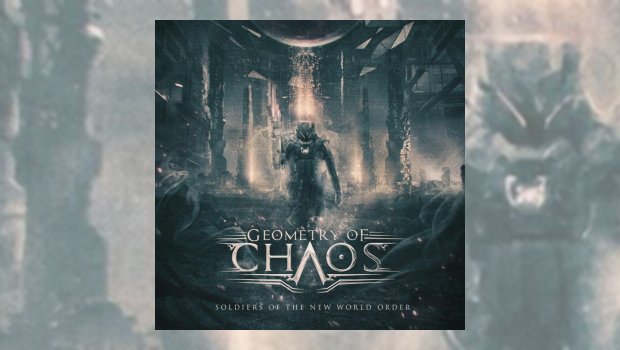 Geometry of Chaos – Soldiers of the New World Order

Geometry of Chaos is the new prog metal project of Fabio La Manna (guitars, bass, songwriter) and Davide Cardella (drums), born from the ashes of their previous band, Alchemy Room. The album was released late last year, but as I was unaware of it then, and as I have never heard any music from Alchemy Room, Geometry of Chaos is completely new to me. And I was intrigued from the outset. Opening number Idolatry explodes in my ears like some distorted and demented metal version of Grieg’s In the Hall of the Mountain King, before subsiding to become a more conventional metal number, albeit with some fantastically less conventional drumming underpinning it. I can’t say the stylings of guest vocalist Marcello Vieira are totally to my liking, but there’s no doubting their strength and power, and the style is one I know is popular so my own preferences are easily overlooked. Before this opening track is over, I already think of several friends who I know will love this album.

Soldiers of the New World Order is fairly overtly a concept album about the current state of the world, and La Manna’s anger and passion certainly shine through. Only one song in and my impression is that the band is all about heaviness, melody and groove. That last is the important one, as no matter how complex or technical the music gets, the groove is always there. In this respect, it’s easy to draw a comparison with Tool, even if the music doesn’t necessarily sound Tool-like. I would be very surprised if Tool is not an influence of La Manna. And if I’m inferring (or, perhaps more honestly, guessing) influences, another would be Alice In Chains. Being a fan of both bands myself, if I can hear them in Geometry of Chaos, I guess it’s no wonder that I’m enjoying this release.

In the following track, Joker’s Dance, the “grunge” influence becomes even more obvious. La Manna sings in a manner that immediately recalls Scott Weiland to me, and there’s a hint of Stone Temple Pilots in the music, too. But for every grunge band I could make a comparison too, there’s a prog metal band, so there’s no way I would put Geometry of Chaos in with a lot of the alt-prog bands that are around. There are alternative influences, but this is overwhelmingly a prog metal album. But it’s a prog metal band that doesn’t really sound like (m)any others. Towards the end of Joker’s Dance, we hear another element of Geometry of Chaos’s sound; an emotional and atmospheric – dare I say cinematic – ambient sound. Impressive, again, in that no matter how atmospheric or melodic the music is, there is always a rage bubbling under the surface.

Spiral Staircase reminds me a little of Polish prog metal bands like Acute Mind or Osada Vida, with that almost jazzy groove underpinning the metal. It’s the most laidback that Geometry has sounded since the album began, and it makes for a refreshing change of pace. At this point, I should admit I’ve never been the best at deciphering lyrically-based concept albums. I find I generally find instrumental concept albums more effective (which I realise makes me sound a little crazy, but I won’t argue with that), and so while there is an obvious over-arching story, Soldiers of the New World Order sounds almost to me like the tales of several of the Soldiers. Each song seems to represent an individual’s struggles to live in the world, and the situations and problems they face. I’m not sure how much the stories interlink, but I’ll leave that for some other reviewer to decipher.

For me, the music of Soldiers of the New World Order is enough to keep me engaged throughout the journey. If anything, the sense of mystery from not quite knowing where the pieces fit, adds to the concept – to the sense of drama and of reality. Everyone knows the world seems to be becoming a more threatening place, with freedom and liberty missing in parts, and seemingly in danger in others. The UK almost seems to be walking blindfolded into a more authoritarian and totalitarian state. But though the soldiers of this new world are all facing many of the same issues, there is little cohesion or organisation that binds them. We are all soldiers, but there is no army. I know the pieces fit, because I watched them fall away…

The guest vocals of Elena Lippe on Observer bring another really nice change. Her vocals also provide a magnificent counterpoint to the slightly off-kilter instrumentation of this number. It’s not a comfortable listen, but it’s absolutely compelling, and one of my favourite songs on the album. Its position on the album more or less makes it the centrepiece, and deservedly so. One of the most impressive aspects of Soldiers of the New World Order is how well the album as a whole has been sequenced. Despite some quite different sounds and styles, it all flows remarkably well, and is almost Dickensian in its episodic nature, with regular intervals of more intense drama, designed to keep the listener on edge, and eager to hear what’s next. The music is quite wide-ranging, and variable in mood and style, but even when some of the changes are quite rapid, they come naturally and fluidly. Nothing is ever jarring or out of place.

I could quite easily rhapsodise in great length about each and every track on this album, but I’m aware of how long this review already is. I have to at least mention the sequence of Saturated through to the title track, all of which are absolutely album favourites by a very long way. Over the course of these three tracks, the band manages to display all that is great about Geometry of Chaos in the greatest way. For me, it’s simply a pleasure to hear a prog metal band that doesn’t just play on Dream Theater tropes. While I suspect Dream Theater might still be an influence, there is pretty much no part of this album where I could draw a direct comparison to that band. And while I hear Tool at times, there is no way that Geometry of Chaos will be lumped in with those bands described as Tool clones. But I’ve gone on enough. Give this album a listen, and make your own decision. For me, if I had known about it at the time, it would surely have been in my top ten prog metal list for 2020.