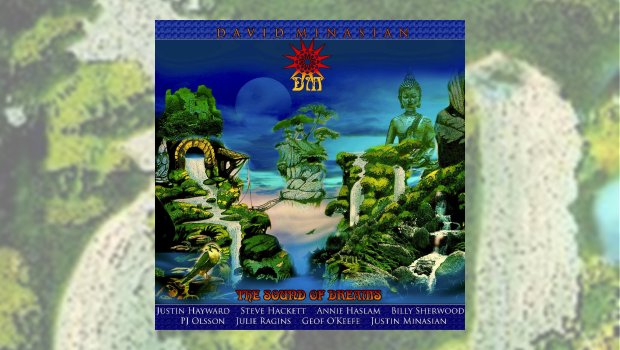 David Minasian – The Sound of Dreams

With over 60 documentary films accredited to him, along with music and concert videos he has directed and produced, David Minasian has finally found the time to complete and release what is effectively his fourth symphonic album.

The first, Tales of Heroes and Lovers, was released in the mid-eighties with Minasian writing or co-writing the bulk of the album, and twelve years later a second symphonic rock album, titled It’s Not Too Late, was released in conjunction with singer William Drews. The following year saw Minasian begin a close association with Camel, the long established English progressive rock band. Several concert and documentary DVDs followed, all interspersed with other film work.

Random Acts of Beauty, his third symphonic album, appeared in 2010 with songs composed by Minasian and his son Justin, also featuring Andrew Latimer of Camel on one track, his first studio recording in eight years following his recovery from a bone-marrow transplant.

Work began on the follow-up in 2013, but then involvement with Moody Blues frontman Justin Hayward resulted in further documentary and concert work. Finally, we come right up to date with Sounds of Dreams which features songs begun in 2016 with Justin Hayward, forming the suite of the same name, split over three movements.

The music itself begins in trademark orchestral fashion with a gentle, tinkling introduction and the warming tones of Justin Hayward on The Wind of Heaven (Prologue), drawing the listener in, smoothly evoking visions of sparkling sunshine on a meandering stream, moving seamlessly to All In, Minasian’s sensual piano playing and Hayward’s vocal swept aside by soaring guitar, the swirling circles of envisioned light drawing you down into its soft embrace.

There are echoes here of an older project, recalled by a group of musicians known as The Mandala Band whose glorious soundtrack compositions swelled and soared in a similar vein. The guitar is given free-rein as the sounds of a heavenly choir accompany it to a full stop finish.

Moving on, the soft, blossoming sounds of piano, flute and bass meander into the Spring-like Faith, Hope and Love, effusively foretelling of renewed hope and light, much welcomed in these strange times.

The Sounds of Dreams suite is next, beginning with a sitar rush before quickly settling into its former hypnotic flow. The indisputable voice of Annie Haslam floats in, the passage of time adding a further quaver to her haunting and distinctive voice, but nevertheless it soars and segues into the keys of a widescreen Lord of the Rings epic.

The second movement darts in, more lively than anything previously. Billy Sherwood’s bass drives the track, racing after the keys, before regaining mastery of the track. David’s keys, this time more strident, lead the listener into a gallop across the plains, the starlit sky shining down, before tumbling down the chords as calm is restored, the balm of the orchestra and guitar taking sway once more as we sweep into the Third Movement.

There’s a wonderful interchange between keys and what I think is an oboe, dancing with the guitar. We are in woodland now, witnessing the awakening of Life itself, a mystical melody rising and concluding on a symphonic swell.

Leaving the Suite behind, the melodic journey into dreams continues with Road To Nothingness, the breathy gentle vocals, with a nod towards a soporific Gerry Rafferty, accompanied by further brushes of piano and woodwind, painting gently on the aural canvas. Guitar and a choral swell reappear right on cue, reflective and calming, reassuring, drifting; close your eyes and let it carry you along in awe and wonderment, before once more we finish on a choral high.

Room With Dark Corners begins with a more folksy approach, reminiscent of Blackmore’s Night, further reinforced by the powerful vocals of Julie Ragins. The melodic chorus draws further references to Hayley Griffiths or Olivia Sparnen-Josh. The lightness of touch here belies the title. It’s a great uplifting track and the vocals are over far too soon, the track spiralling mysteriously into deep R.E.M. territory, ominous footsteps accompanied by birdsong, yet with mournful vibes. It’s slightly unnerving.

Hold Back the Rain is announced with a flurry of birdsong before melodic calm returns. Perfectly pitched piano is king here, the woodwind leading us through with a breezily simple yet poignant guitar interlude from Justin Minasian, rainfall drumming taking the track out to the end.

Twin Flames at Twilight is the longest track on the album, beginning with acoustic guitar and woodwind gently twisting together, some Mellotron holding the patchwork together with a seamless stitching of musical wizardry. The orchestra builds quietly, guitars strum, the Mellotron returns and the vocals take over, possibly Justin Hayward. Then throbbing guitar and drums crash in, racing across the track with phenomenal speed. It’s the album’s first dissonant section, but it fits right into the sequence, hammering relentlessly up and down the fretboard, with accompanying ‘fuzz’ guitar keeping pace effortlessly. Then, again without warning, this rough intruder is thrust gently to one side and the melodic guitar and orchestral overlay returns, soothing and balming.

Electric guitar returns again, this time in a harmonic accompaniment to its strumming acoustic counterpart, joined by epic keyboards. The vocals return quietly, leading us by the hand into the quiet safe paths of this dreamy album. Minor chords are used effectively here, a final nod to the epic, and then acoustic guitar strums us out to a conclusion and the story is gone, but oh so softly.

Tinkling piano and delicate frissoning tubular chimes lead us into the straightforward So Far From Home, with the vocals of PJ Olsson producing a nice tone and lovely melody. The Moody Blues influence shows through here, even lending itself to sitting on an Alan Parson’s album.

And before we know it we are at the Epilogue, Wind of Heaven, the unmistakeable Annie Haslam singing about times ‘lost and cast adrift’. This feeling of being bereft does not last, the Wind of Heaven promising to overcome all, if you let go and let it in to take you and guide you. All will be well. The keyboards and guitar swell in harmony once more, as the strong drum beat begins and we move towards the climax of the song, and indeed, the whole album. The wind rises, and then the mysterious horse gallops us out once more to the edge of the dream, and beyond.

This is an immersive album, one that grows with each listen (as all good symphonic progressive albums should) and David Minasian’s mastery of his chosen field is paramount here, not only in the writing and the playing, but also by the placement of the accompanying artists. Haunting, calming, intriguing, beguiling, exhilarating, and mellifluous all at once, this is an album for absorbing, with the headphones and a glass of a favourite something to accompany the experience.