Yes have announced European and UK dates for their delayed Relayer Album Series tour, now confirmed for May and June 2022. The tour, which was originally scheduled for 2020 and then May 2021, has been delayed due to the ongoing Coronavirus restrictions and will feature the 1974 classic album Relayer. Meanwhile, the group’s bass player Billy Sherwood has spoken of his special relationship with Yes founder member the late, great Chris Squire, whom he replaced in the band. 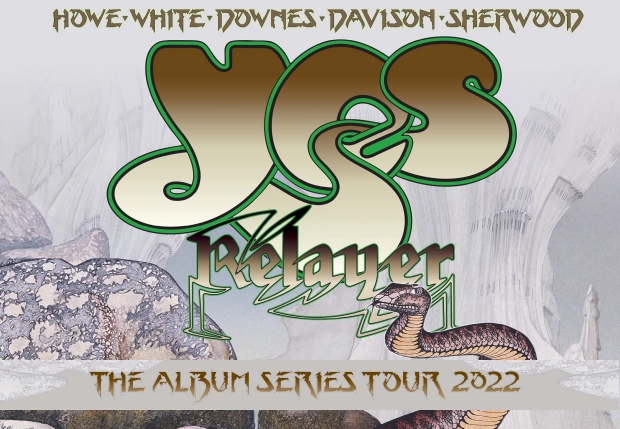 The current Yes line-up of Steve Howe (guitars), Alan White (drums), Geoff Downes (keyboards), vocalist Jon Davison, Billy Sherwood (bass guitar and backing vocals) with additional drums and percussion by Jay Schellen, has been together now since 2015. Previous tours in the Album Series have showcased some of the classic Yes albums, including Fragile, Close to the Edge and Tales From Topographic Oceans.

The Relayer tour will be directed by Roger Dean, who joins the tour with an exhibition of Yes-related art, and the stage show will feature a high-definition video wall.  The show will include favourite classic tracks from Yes’ extensive catalogue together with Relayer, the seventh studio album by Yes and one of the band’s most distinctive, in full. Relayer marked a slight change in direction as Patrick Moraz joined Yes for this one studio album, replacing Rick Wakeman on keyboards, and bringing an edgier, avant-garde feel to the recording. This was perfect for the opening track Gates of Delirium, almost 22-minutes in length, with its battle scene featuring the keyboards of Moraz and Steve Howe’s guitar.

Yes will play a series of European dates in May and June 2022 before the UK and Eire leg in mid-to-late June.

Bass player on the Relayer album, indeed every Yes studio album up to and including 2014’s Heaven And Earth, was Yes founder member Chris Squire, who passed away in May 2015 aged 67. Chris was widely regarded as one of the finest and most influential bass players of his generation. With his trusty 1964 Rickenbacker RM1999, Squire developed a dynamic, yet melodic, style of playing that allowed him to contribute so much more than just traditional bass lines to the music, to become almost a second lead guitar.

Among his many admirers is Billy Sherwood, who was asked by Squire to take his place in the band when Chris knew he would be unable to continue. Billy had first worked with Yes many years before and got to know Chris Squire well, so this was a really emotional moment. 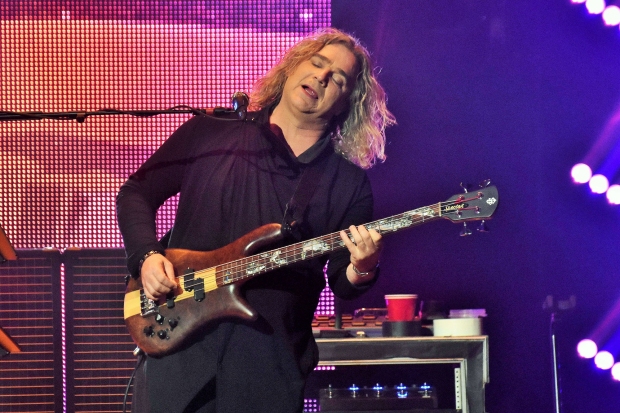 “My passport is stamped ‘1989’”, Billy laughs, “goes back a way! I’ve had my fair share of the revolving door. It’s funny when I see people who say ‘Who is this guy? Where have you been?’ But it’s been an interesting and amazing journey to be a part of the whole thing. It used to just trip me out and I wondered how did I end up in this position?

“Sadly, when Chris was diagnosed and knew he was going and asked me to take his place, it was just the reality of fate, the destiny of my musical career which I’m blessed to have. What can you say? Personally, for me, it’s a very strange thing.

“Yes was my favourite band – religiously. And, somehow, I have replaced my favourite bass player on Planet Earth, may he rest in peace. It was hard to lose him but this is what he wanted. A very interesting and bizarre journey.”

I suggested that it must have been a great honour for Billy to have received that blessing from Chris.

“It really was and also from the band. It wasn’t just Chris, the band wanted it too. That was a very touching moment and very, very sad having that conversation with Chris. For the longest time I was pushing it away and, when he called the first couple of times to say the band really wants to keep touring, he said ‘They have this tour with Toto. They want to go but I’m sick.’

“He called me the next day with the same line. I said ‘Chris, we spoke about this already’. By about the third or fourth call, he said, ‘They really want to go. They said why haven’t you told him? You’re just not getting it!’

“I’m like… ‘Wow!’ That was the moment… That was a real… crushing moment.

“I wasn’t happy about it at all because it was heart-breaking to have to do this. As time goes on, and life is life, you have to accept these things and I took it on as a serious, heartfelt badge of honour and really wear it proudly and protect it. I’m very defensive for anyone who says ‘No Chris, no Yes.’

“I’m like ‘What was he talking about?’ That’s exactly what he didn’t want! He wanted it to continue. But it’s been a journey that has been amazing and continues to be and blows my mind every time I step on stage to play that music, I think about Chris every moment that I’m up there.” 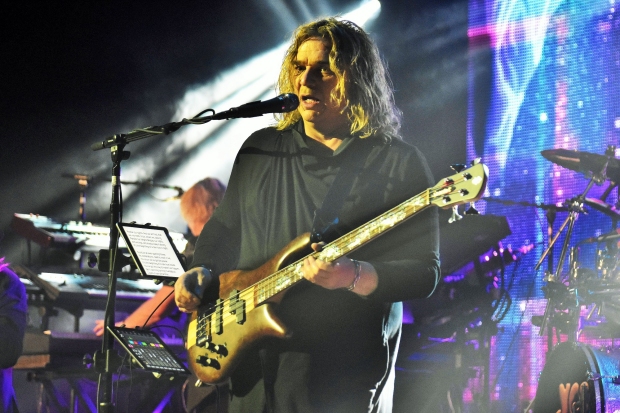 I remarked on Billy’s striking physical resemblance to Chris and Billy laughs out.

“I don’t know what that is but we used to laugh about that”, he continues. “We had this running thing. When I met him, he was a little taller than I was but with age, right?” Billy gives an oscillating hand gesture, “the scales tipped a little!

“I said ‘I’m Billy Sherwood, it’s really nice to meet you’. He says ‘You’re very tall!’ Okay… it’s good to be tall”, Billy laughs. “What a weird thing to say to me! But he had this amazing sense of humour. We laughed so much. When we were on stage together with Yes, we had our side of the stage over there and we would just bullshit all night long, just to have some fun. Yeah… I miss him.

“I’ve been in a lot of line-ups with Yes, at this point, maybe more so than anyone in the band. I’ve been a part of the semi-classic line-up and all these different versions but this version is the most peaceful and happy and content. It’s so joyful, we all enjoy each other’s company and just get on with the mission statement of making great music on stage, which is nice. No drama, if you’ll pardon the pun! It also inspires you to keep going forward. It’s a healthy thing to have that happy band.”

While Billy makes no secret that Yes is the absolute musical love of his life, he tells me that it wasn’t love at first sight. And it was also quite different from his early influences and growing up following his parents around the cabaret circuit in Las Vegas.

“Initially it was jazz, big band and standards: Sinatra, Dean Martin and those crooners”, he says, “because my dad was a crooner, a big band leader. He was doing gigs in Vegas and my earliest memories are of sitting under a light grand piano playing with Hot-Wheels cars while my mom was sitting over there playing drums, dad playing piano, a bass player in the corner and a trumpet player and they were rehearsing for one of the gigs they were doing.

“As I started listening to my own thing, because of the radio that was on at the time, there was a lot of funk and Earth, Wind & Fire, Parliament and Ohio Players that I was into. Then one day, when I was about 10, I was walking down the hallway and Jimmy (Haun) and my brother (Michael), who were best friends and five years older, were listening to this record and called me into the room.

“They said ‘Check this out, its a band called Yes and it’s called Close to the Edge. It’s really cool’. They played me the intro plus…” Billy hums the riff from the verse.

“By the time this part ended, I went ‘How can you listen to this? This is horrible!’

“And so I left the room and they carried on listening to it. It just freaked me out, I wasn’t ready for it! A couple of days later I was walking down the hallway and I could hear…”, he hums the same riff, “and, all of a sudden, it sounded different to me.

“I thought ‘this is cool’ and I opened the door, they waved me in and I sat with Jimmy and Michael listening to Close to the Edge. From that point forward you couldn’t even talk to me about another band! 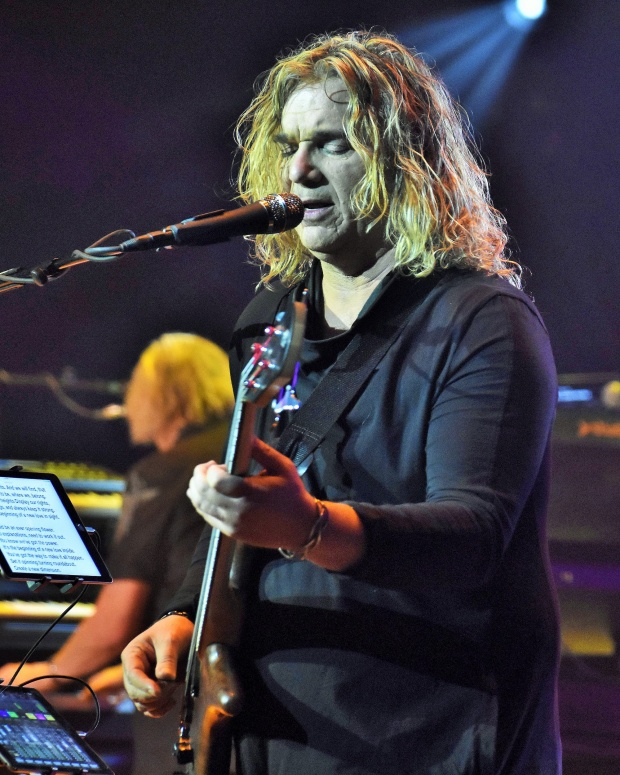 “Led Zeppelin? No, no, no! Of course I appreciate Led Zeppelin as well, now that I’m older, but when I was young I didn’t want to listen to anything but Yes. That’s how it was, the imprint was made and it became my whole life. The context of everything, and how it connected, looking back now, is just bizarre to me. How does that happen? I don’t know. It’s a blessing, a blessed life.

“I’m very happy that I was raised by two musicians because I don’t know if I would be doing this otherwise. It was so in my world, the music, it was weird that other people don’t do this. ‘Is this normal?’ Other people were going to regular jobs and my friends at school would talk about ‘What does your dad do?’ ‘He’s playing at The Dunes Hotel tonight. What does you dad do?’ It was a strange world within a normal world but one that I am grateful for.

“I discovered my own family’s history as I got older. My dad’s parents were in vodka. I have some amazing photos on the wall of Bobby and Gail Sherwood and they had their own 18-piece band. One of the amazing things was my grandma Gail, she was a piano player, and back in the day when Baldwin pianos were just starting to take on endorsements, they endorsed my grandma. One of the endorsement stunts they did was to strap her piano to a balloon –  they took the gondola off and put a piano on some wood –  and lifted her into the air 3,000 feet and she played piano! The pictures are unbelievable! I’m dedicated to my career but this woman was crazy!

“All that legacy and history… I understand why I do what I do, genetically. It’s a blessing and a blessed career. I know a lot of people in the music business who want to go for it and have gone for it and had their success, but my success just happened to come with my favourite band on the planet. That has opened my eyes to the business side of Yes. It is a working machine and always has been. There’s different levels of discovery along the way in this journey that goes all the way back to listening to Close to the Edge and not understanding it and then having Chris ask me to take his spot. It is just bizarre – a bizarre life.” 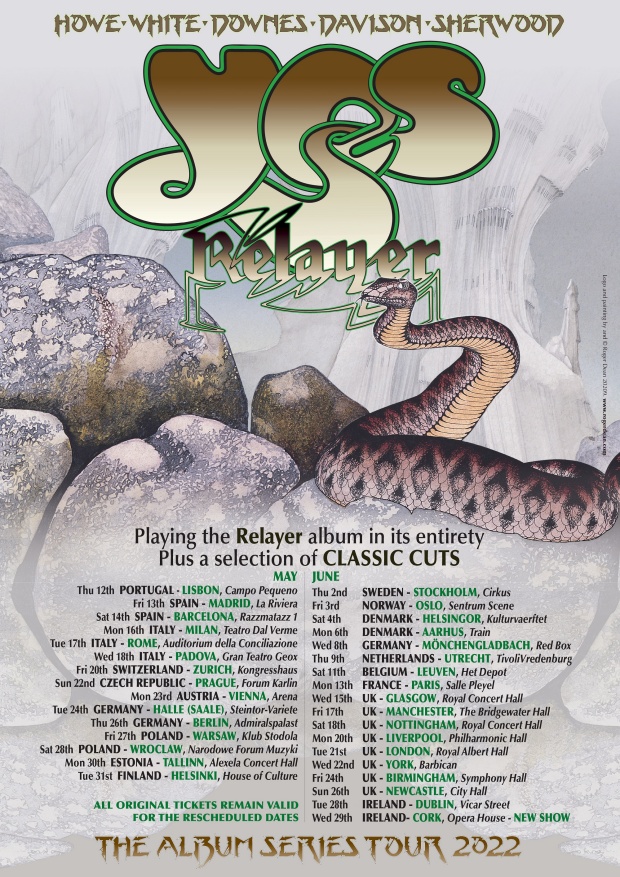 Full details for all shows go to venue website or Yes World website. You can keep up to date with all Yes’ UK & Eire dates (and much more) with the TPA Gig Guide