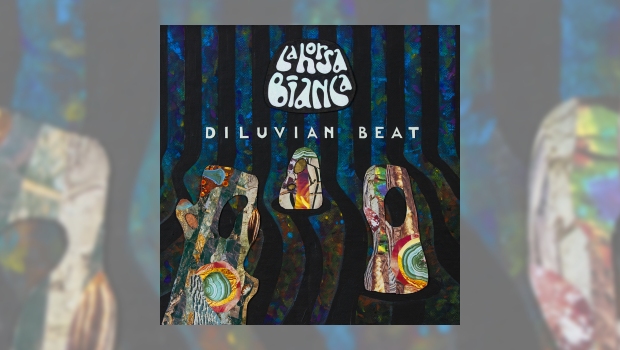 Ukrainian band La Horsa Bianca provided a far more mind-blowing and mind-bending experience than I expected with Dilvuvian Beat, which begins in a fairly typical psychedelic manner. Encyclica is an entirely pleasant opening number, which I happily listened to. It’s enjoyable, and I love the subtle differences the Ukranian language and instrumentation lend to a familiar form, but it hardly seems progressive enough fare to grace these pages. I’m well aware that I often stretch the boundaries of what might be considered prog(ressive) music, but even as a master of square pegs in round holes, Diluvian Beat doesn’t seem to merit a review. Perhaps a mention in an ADA – because there is no doubt that this is worth listening to. I mean, quite honestly, if I had come across this album earlier in the year, it would have been a contender for my list of favourite albums of 2020!

A Missage is even more beautiful than Encyclica, and one of my favourite tracks – reminiscent of many familiar tunes, but distinctively its own. Any fan of Winnie-the-Pooh will immediately recognise that the title of the track refers to Piglet’s sending out an SOS in a ‘missage’ in a bottle. But as much as the characters of Winnie-the-Pooh might be referenced, it is the Rabbit of another story that I find myself thinking of. And if you go chasing rabbits, you know you’re going to fall. Remember that square peg and the round hole? Well that’s a rabbit’s round hole, and logic and proportion have fallen sloppy dead. While the lyrics of the opening track are watery, and (especially from the fifth minute) the music of A Missage are watery, all still seems relatively calm. With the following track, the deluge truly floats us away, and down the rabbit hole.

From the opening notes of The Mouse Principle, it’s clear we have shifted states. On their Bandcamp page, La Horsa Bianca warn that The Missage is the calm before the storm, and that The Mouse Principle hits like a wave, but it’s not until you listen to the album that you realise how true this is. The album is composed of pairs of tracks, and I have to admit it’s this middle pairing of The Mouse Principle and Laws of Slow Motion that is my absolute favourite. There is a constant churning intensity to the music of The Mouse Principle that pushes the listener along with its heavy flow. There’s a moment of glorious respite towards the end, which is perhaps my favourite passage on the entire album, as electronic sounds float around like the nebulous globs of the cover art. It’s the closest approximation in music I’ve ever heard to being underwater. And when that last chord crashes, it takes me by surprise every time. Laws of Slow Motion has a gorgeously slow and lugubrious feel, and more of those wonderful sound effects. As much as the album begins by sounding pleasant but conventional, this middle section is anything but. I mean, it’s still beautiful, but not in any classic sense. It’s beauty in the sense that people recognise beauty in the power of nature, even when nature is at its most destructive.

I particularly like the way the album changes, not just in sound and style, but in time and space. Depending on where you are in the album, there are passages that evoke and remind of music from the ’60s, the ’70s, the ’80s and the ’90s, and from the musical histories of different countries. Most bands that receive the retro tag tend to play in the style of one era from one country only, almost to the point of pastiche. It’s rare that I am a fan of retro bands for this reason, no matter the calibre of talent of the musicians. But when the music floats around like La Horsa Bianca, it’s a pleasure – not least because there seems a surprise around every corner. And while I expected this feeling might fade with repeated listens, it has not. No matter how often I hear the album (and I have listened to it a LOT!), I remain enchanted by the changes, even if I now know that they are coming.

After Laws of Slow Motion, the tide appears to be turning, and the next track, It’s Not But Damn, is paired with The Missage. It has a similar watery motif near the beginning, as that which ended The Missage, where it is almost impossible not to hear the gentle dripping of rain. Halfway through, though, it is clear we are not out of danger. This section, named ‘Tsunami’, is appropriately named, sweeping everything away in its destructive and cataclysmic wake. It’s the heaviest passage on the album, and it’s incredibly powerful. The silence afterwards is ominous, almost as heavy in its lack of sound than the wall of sound that preceded it. And yet, it’s optimistic, too. The track’s title really comes to life here. That sense of “It’s not…..but, damn!” is palpable.

When vocals reappear in Сурми останнього дня (Trumpets of the latter day), it’s another surprise. Honestly, I’d forgotten this was not an instrumental album, so far behind did we leave Encyclica, and so vividly do the intervening tracks paint a picture and tell a story without needing to use words. This is a quite different sounding track to any other on the album (which, considering none of them really sound alike, sounds an odd statement to make, and yet still seems necessary to do so), and almost reminds me of a strange amalgam of Italian and Polish symphonic rock. There’s a definite “after the storm” feel to the song, and yet ends by wishing for another flood to come and sweep us away again. It’s perhaps worth noting that the lyrics for both this and the opening song are taken from poems. The words for this song are based on a poem by Ukrainian avantgarde/surrealist poet Bohdan-Ihor Antonych, and those of Encyclica on a poem by contemporary Ukrainian author Yuri Izdryk.

It’s unusual for me to quote from a band as much as this in a review, but it seems pointless to attempt to paraphrase: “The Greek for flood is ‘kataklysmos’, so the theme feels rather apposite as we ponder the times we found ourselves in. The feeling of being gradually engulfed by things we can’t control is sort of reflected in the flow of the album.” Sometimes it’s nice to be overwhelmed by things. Some of my greatest memories are of being pounded and beaten by the waves at the beaches of my hometown. The brief sensation of fear when underwater and still thrown about by the power of the waves that occurs when trying to scramble to the surface, and find I’m scratching at the bottom of the sea. Not knowing what is up and what is down is disorienting when you know it shouldn’t be. But it’s kind of cool, too. This album is equally cool in the way it takes things we know, and turns them on their head.