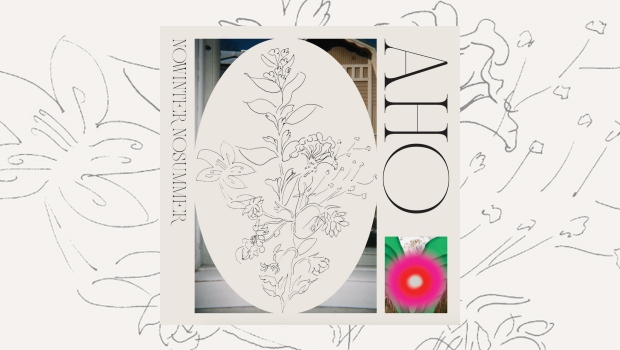 Matti Ahopelto is perhaps a known name in Finland (being a member of a couple of bands, as well as other work I shall get to later), but his debut solo album as AHO is the first I’ve heard of him, though hopefully not the last. NOWINTER NOSUMMER begins with what sounds like the representation of dripping water. To me, it sounds even more than that. I can’t help it, but every time I hear these introductory notes, I have the mental imagery of being in a dimly lit cave, where the only sounds are the slow dripping of water from a stalactite on to the awaiting stalagmite. The image fades as the flow increases and expands outwards, like the ripples that subtitle the track, and then the full instrumentation comes in on the Wave it seems to be named for. It’s a truly grand opening statement, and perfectly sets out what makes NOWINTER NOSUMMER such a great album, with its amalgam of organic and synthesised instrumentation, and quite vivid imagery (at least, for me).

Ambient music is often best listened to passively, and indeed that is how Eno envisaged his first ambient works should be experienced. Some ambient music, though, demands more active listening. Try as I might, I don’t think I could listen to AHO passively, as the soundscapes fill my head with accompanying landscapes. I imagine this has much to do with Matti Ahopelto‘s experience in composing for film, fashion, and advertising, and a recognition of the relationship between the audio and the visual. Indeed, the release concert for NOWINTER NOSUMMER was advertising as “a beautiful and ethereal audiovisual experience”. I can only imagine how incredible it must be to see and hear AHO’s music played on stage.

The second track, Augmented Reality Clouds/Huutaa, is the album’s longest, and initially my favourite. It features Karina, whose second album, 2, I reviewed earlier this year, and their presence brings something really special. I would definitely like to hear further collaborations between AHO and Karina! The music and voices of Karina (Karin Mäkiranta and Helmi Tikkanen) are a perfect fit for AHO, as their beautiful and ethereal art pop, that borders on post rock, has the same comforting warmth of Ahopelto’s. Their presence on this track is understated, and perfect. This is, after all, AHO featuring Karina, and not the other way around. The music is delicate, but swells where it needs to. Google Translate tells me that ‘Huutaa’ means “yell”, but this is the quietest yell I’ve ever heard. As much as I love this track still, others have managed to crawl under my skin and further into my affections. This is an album that gives more with every listen.

While much of the imagery that fills my head seems suitably wintery for music from Finland, it retains a comforting warmth. I imagine this has a lot to do with AHO preferring to use acoustic instruments and analogue synthesisers. Whatever the reason, it’s charming, and envelops the listener in a warm, fuzzy embrace. As if to underscore this feeling, PLASTIC KA KIN is underscored by the warm crackle of fire (or vinyl, if you wish) – but for me the imagery is definitely a campfire in a clearing in the woods. There’s snow on the trees, and every now and then you can hear when some falls to the ground. This is easily one of the tracks which has grown in my affections. Simply lovely.

strangetimeinmylife as a title pretty much sums up 2020 for me and, I suspect, for many people. Whether it is a response to this year, I don’t know. But it feels to me, despite the driving rhythm, to be an exhortation to slow down. “Control the controllable”, my old boss always used to say. So despite the constant barrage of statistics relating to coronavirus, we can step back, and appreciate what we have. Behind the incessant beat is a beautiful and delicate melody, and as I focus on that, it somehow becomes higher in the mix. It’s only an illusion, because of course it’s not any higher in the mix at all, but it just goes to show that it is up to us what we choose to focus on – and this year, that’s an important thing to remember.

Again, though, the idea that AHO’s music is ambient is somewhat confounded by the way this track has two distinct layers that can be listened to and appreciate separately as well as together. If ambient music is something that can be listened to without focusing upon it, then AHO’s music cannot be ambient, for it is impossible not to be drawn into it, not to end up listening intently, and seeing as well as hearing the music. Thus music for fields sounds just like that. Vast empty snow-covered fields, the snow soaking up the sound in that peculiar way it does, so that what sparse sound there might be is somewhat dulled. I can’t help but see it. And for some reason, there’s always a fox. I catch a glimpse in the corner of my eye, but I turn, and he’s gone.

Given that they are more or less title tracks, I guess I ought to mention nosummer and nowinter, which are both quite brilliant. nosummer is all slow chiming beauty and glistening glissandos, before the main melody comes in, itself sparse and minimal, as the background noise swells and crescendos. nowinter sounds out of this world in comparison, as it begins with the spaciest sounds of the album, which resonate, spill out and surround me. It’s a fully immersive sound, to the point where I feel as I’ve just fully immersed myself in the sea, so that I can hear the sounds of the waves passing over me, underwater.

Both of these tracks are beautiful, and seem to play into both the contrast of summer and winter, and the consistency of no summer and no winter. It’s only in the final minutes of nowinter that, for me, the piano of Tapio Viitasaari ties the two together, and its amazingly effective – and affective, as I find it quite breathtaking, even after hearing it so many times. Of all the musicians that Matti Ahopelto has joining him in AHO, it is consistently Viitasaari who impresses the most. Well, maybe Antto Melasniemi, too, as I’m a sucker for the sax. But ultimately, this is Ahopelto’s album, and as much as his compositions are augmented by the playing of the additional musicians, it is his vision that has created these works that go beyond ambience, that demand attention. And I honestly can’t wait to hear what he has lined up for us next. In the meantime, for those who listen to NOWINTER NOSUMMER and find themselves wanting more (and I couldn’t blame them!), the two track EP, Usually I’d overthink this released earlier this year is equally brilliant.