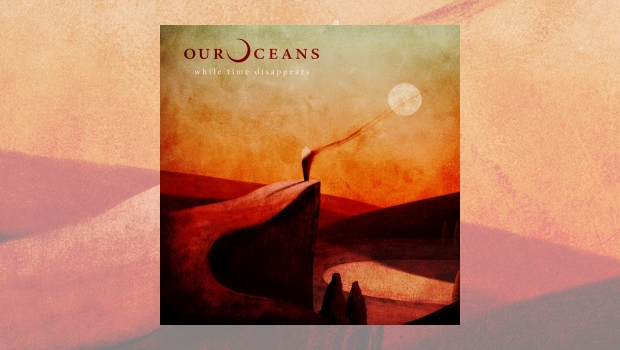 Our Oceans – While Time Disappears

Our Oceans, as some may know, came from the ashes of Exivious. Well even that’s not quite true, as Our Oceans was originally envisaged as being a one-off side project, and Exivious was reduced to ashes only after Tymon Kruidenier abandoned that band after realising he didn’t want to return to being “just” the guitar player. This history is somewhat important, as this sophomore album from Our Oceans is a very different beast to the debut. And for that, I’m quite glad, as when it was first announced that Exivious existed no longer, and Our Oceans would be continuing, I was quite disappointed. Not that I don’t like the debut Our Oceans album by any stretch of the imagination, but I do far prefer the music of Exivious. Their blend of metal and jazz fusion instrumentals easily trumps the more mellow and dreamy Our Oceans debut for me.

Our Oceans came from Tymon’s desire to release a song-based album, and was initially a collaboration between him and Noora Häkkinen. However, creative differences meant Noora left before completion of the album. Well, I say before completion, but by all accounts the album was more or less complete, apart from vocals, and Tymon took these on himself. However, rather than this one-off side project getting Tymon’s song-based writing out of its system, and after the end of Exivious, Our Oceans has been streamlined to a trio for While Time Disappears. And that’s just the beginning of the changes!

Opening track and lead single Unravel is well titled, as within seconds any thoughts that this might be a continuation of the sound of the debut are unravelled. It sets the stall here, definitively stating that this will not be another mellow and dreamy affair. The song has its origins in the time when it remained uncertain whether it would be Exivious or Our Oceans which became the future, and that shows. This song has more than a little feel of Exivious about it. It’s clear there will be more aggression on While Time Disappears, more of the metal that wasn’t really present on the debut. As the album progresses, it also becomes obvious that the band is worrying far less about keeping within clear boundaries of any one style. The debut gave the impression that Tymon had envisioned a firm foundation to work on, with well planned blueprints of what to build upon them, so that the whole seemed somewhat constrained. While Time Disappears, however, seems more like it was built from only rough outlines, and although Tymon may still have had a map, he was happy taking whatever direction felt right at the time. It all feels more natural and fluid, and yet still an entirely cohesive listen.

Weeping Lead follows, and immediately pulls back to less beast and more beauty. If Our Oceans was Tymon’s idea of creating song-based material, this is proof that he’s taken it one step further, into singer-songwriter territory. Throughout the album I’m reminded of troubadours such as Nick Drake and Tim Buckley (though Tymon, vocally, probably sounds more like Jeff than Tim). The song changes halfway through, and Yuma van Eekelen sounds great on the drums. I love his playing throughout, and though Jasper Barendregt is a great drummer as well, there is no doubt in my mind that Yuma is the right man for Our Oceans. His drumming is definitely a highlight for me.

But I also have to make particular note of the playing of Robin Zielhorst on bass, who has played with Tymon in Cynic and Exivious, as well as Our Oceans, and his interplay with Tymon’s guitar playing is absolutely beautiful. Robin also more than fills the gap left from the absence of a second guitar player. The music of Our Oceans on this album feels so much more alive than that of the debut, and I think this is due to the more sparse and concise sound made from the trio, with Robin’s bass work the most obvious example of this. There is honestly no need for a second guitarist on While Time Disappears.

Weeping Lead turns into something that sounds part Alice in Chains and part Mater Thallium. It’s all bendy and doomy, and wonderfully heavy. Tymon’s tortured vocals just before the song begins to fade into the ether are glorious. This is a standout song that was an obvious choice for a single. That the following The Heart’s Whisper was also a single makes me glad I hadn’t listened to any of the singles prior to the album release, as it meant they were all new to me. (I long ago gave up on listening to singles before the release of an album, as they can too easily give the wrong impression, out of context.) Again, it starts out far quieter than it ends up. The crescendos and climaxes (yes, plural) are a roller coaster of emotion that is essentially the album in microcosm.

It might seem a strange way to end a review, but these three opening songs and singles do give a very good idea of what to expect within this album. The three musicians exist in the liminal space between power trio and jazz trio, with a sound a little like Leprous meets Radiohead via The Mars Volta, with occasional Floydian overtones, playing Nick Drake and Tim Buckley, with Allan Holdsworth on guitar – yes, I really did just compare Tymon’s playing to Holdsworth – deal with it! I may have come to this album somewhat reluctantly, knowing this band was responsible for the demise of Exivious, but I have been well and truly won over. I may originally have been disappointed to hear that Our Oceans was not a one-off, but I’m now excited at the prospect of what this band might do next. While Time Disappears makes it clear that Our Oceans do not feel at all bound by what came before, and songs like Your Night, My Dawn (probably my favourite song on the album), make it clear that nor are they bound by the present. It almost goes without saying that I’m already intrigued about where they might go next. 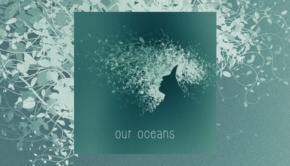