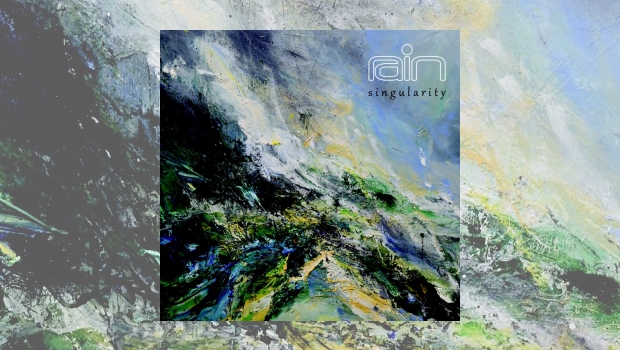 In the year that will always be known for a disastrous pandemic, it has become increasingly noticeable how music has responded intuitively with releases redolent with both negative and positive perspectives on these strange and stressful times. In Singularity, Rain have poured forth their own mixed emotions in a fascinating cascade of myriad styles and ideas. Rain, as a new band, will mainly attract interest initially due to two notable figures from modern progressive rock, including bassist John Jowitt, previously a long-time member of the legendary IQ, but also Frost*, Arena, Jadis and even as a brief stand-in with Uriah Heep. Alongside him in a stellar rhythm section, Rain features the drums of Andy Edwards, who emerged in Robert Plant’s Priory of Brion band before joining Jowitt in IQ and Frost* in the 2005 to 2009 period. However, whilst these names will attract attention, it has to be said that the whole band, comprising the talented Rob Groucutt on vocals, keyboards and guitars and the younger excellent guitarist and vocalist Mirron (Webb), also of the band Hey Jester, is clearly a high quality act. Together this new outfit have made an outstanding and remarkably mature debut album.

Trying to define the sound of Rain is challenging. In the space of Singularity they range across sounds in a captivating and sometimes bewildering musical panorama. Anyone expecting a re-tread of more conventional ‘Rock’ and ‘Prog’ tropes need to check their assumptions in at the door and open their minds to a group of musicians who seem intent on fusing sounds and styles with seemingly no concern about remaining constricted by the limitations and predictability of ‘genre’. Opening track Devils Will Reign sets that agenda very quickly, characterising the imagination and musical agility which permeates the whole album. In the space of seven dazzling minutes, Rain transition effortlessly through gentle acoustic guitars, blended sweet layered harmony vocals, fizzing, bubbling synths, exotic Spanish guitar runs, percussive interludes and loud dramatic rock… and that’s probably not even half of it. Devils Will Reign is actually virtually impossible to do justice to it in writing, such is its unusual feel and structure – it just has to be heard. The first time may induce a ‘WTF?’ response, but there’s something bewitching about it. It draws you back for further listens until you start to understand just what an intelligent and diverse song it is, even if it verges on being a bit bonkers!  What is also notable about the song, and which becomes a feature of the album, is that it is cyclical in nature, fizzling out on a fading wave of acoustic guitars recapitulated from the opening section.

Andy Edwards has shared some of his thoughts on the album with TPA, starting with the multiple definitions of the word ‘Singularity’:

“Singularity has a number of meanings… the idea that technological growth gets to a point that humans cannot control it, the gravitational singularity where the mass and gravitational field of a celestial body is predicted to become infinite by general relativity and it is also a predictable weather phenomenon around a particular date.”

Clearly, this is a band brimming with ideas, using the concept of ‘Singularity’ in its various guises to explore different ideas and emotions across the varying songs. Dandelion, for instance, is a more straightforward infectious romp which fizzes in with oscillating synths, stabbing guitars and great vocals before Jowitt thunders in with an almighty bass line that could sink a battleship, taking the lead, whilst top class Edwards drums crisply, keeping the whole rocking shebang on the road. Rob Groucutt’s keys eccentrically undulate as the piece grooves along unusually. The harmony vocals and the hypnotically spasmodic nature of the song strongly echoes XTC from their Oranges and Lemons era… which is a good thing.

The most ambitious song on the whole album is Walk Away, which Edwards has revealed was originally two separate: “It starts with a vocal and this melody develops and then half way through the tune lets go of that and a new chord sequence emerges that develops into completely new tune… then at the end you hear the original melody but over the new chord progression.” This is an approach which is echoed throughout the album, but perhaps reaches its apotheosis on this extended piece. The gently chiming guitar and keys intro underpins dreamy but almost robotic harmony vocals, which seem to express the frustrations and anxieties we have all felt during various ‘Lockdowns’ and restrictions. The song builds in power, and then out of nowhere we get peculiar operatic vocalisations… this is a truly unpredictable band! We soon drop away to a musical box sounding plucked guitar and the main vocals return. Having a range of quality vocalists gives Rain the ability to throw a variety of different voices into the mix. Walk Away becalms in a psychedelic wash of synths and guitar chords. Then with a scream Rain are no longer walking – they’re thundering along like a funkadelic behemoth with fuel injected bass, piston pumping drums, distorted vocals and sizzling synths. The whole thing briefly leaves the ground towards the end with a soaring but dirty guitar solo. Amidst the ruins of the song, we are left with an echoing coda of the opening bars and the clearly Lockdown inspired robotic chant: …walk away, hesitate, take a day, isolate, walk away, hesitate, take a day, isolate, walk away, hesitate, take a day, isolate, walk away….

The transformational The Magician takes Rain in a totally different direction, dripping with quirky imagination and saturated with musical magic. An acoustic guitar softly casts its spell, acting as a doorway into almost ecclesiastical harmony vocals over a mandolin sound, evoking a sense that we are entering mysterious places. However, have no fear – no capes or cliched sword & sorcery excursions hove into view… nope, Rain conjure up a totally unexpected twist as they flip into a bubbling cauldron of fizzing groove, Jowitt’s glorious bass dictating proceedings like a wand and Groucutt throwing in lashings of slithering keyboards. Bizarre, scatter-gun and brilliantly sung lyrics weave psychedelic images before a chant embellished with additional mind-bending falsetto harmonies takes up the repeated mantra:

I have absolutely no idea what it means… but I definitely became transformed into a disciple, chanting along with this strange refrain. This is a song which really gets under your skin. The inspired eccentricity continues with repeated chants of “…interdimensional, sensational, interdimensional, sensational, interdimensional, sensational…”, rumbling along on drum and bass, and Groucutt’s serpentine synth run adding to the bewildering but exciting musical maelstrom. One wonders what his now sadly deceased father, Kelly Groucutt of the legendary Electric Light Orchestra, would have made of his son’s imaginative performances and song writing on this album – probably rightly proud of such inventive and artistic adventure. The repeated manic line “The Magician shows You” ushers in a band ‘wig out’ with Mirron throwing in a short, sassy guitar solo and the whole band show their chops in a churning, roiling passage… before, like a lot of Singularity, it recapitulates the earworm melody and refrain “You will be the one to hold a knowledge greater than the Sun” in a powerful finale.

Singularity ends in a truly unorthodox manner (of course it does, there’s nothing ‘orthodox’ or ‘normal’ about this album!). The concluding title song is a strange, impressionistic musical mirage which floats in and out of focus. Andy Edwards shared:

“Magician and Singularity could be seen as one song, with some sort of transformation happening to the listener in Magician and then we reach a point where you hear all the previous songs in one go. This is the Singularity moment. Out of this comes the song Singularity where we move towards some sort of resolution (‘This is it…open your eyes’) and eventually we are left listening to nothing more than the ambient sounds that were happening when we got to the end of making that song.”

This is a challenging and unconventional way to finish an album, and in truth this unusual final track will probably divide listeners as on first listen some could be forgiven franky for thinking ‘what a bloody weird way to end the album!’ However, considering the unpredictability of the rest of the album up to this point, one really shouldn’t be surprised by anything from this band. Elements of all the songs are reprised in spectral, stripped down form, punctuated with feedback, curious experimental sounds and treated, dreamy vocals which at the end reprise the lyrics from the beginning of the album as we go full circle. There’s an almost Portishead type Trip Hop feel and eventually the whole piece fades away to ambient background noise. Singularity ends with ‘exaggerated birdsong’, which must be one of  THE unmistakable sounds many of us will remember about early Lockdown when the streets and roads were largely empty and in that blazing Spring the sound of Birdsong seemed louder than we had ever really heard before as nature had some respite from man’s traffic and noise. Edwards also points out that right at the end you can also just hear his wife, Dani, talking to their cat Lola, which he points out means ‘Sorrows’, which seems strangely resonant. However, he admits that apparent poetic connection was wholly unintentional – strange how art works sometimes though.

Singularity is shot through with images and references to Lockdown, and Rain have skilfully conveyed that strange, dislocated feeling of angst many felt as we could largely only connect through technology as human contact was limited. The songs explore and imaginatively describe the psychological and emotional effects that experience had upon us all, and then moves towards an all encompassing ‘singularity’ for resolution. Whether the album fully reaches that resolution is questionable as Singularity is overwhelmingly soaked in eerie, unsettling sounds and a palpable sense of dislocation… but then again that may just reflect where we’re all still at mentally at present with an unresolved pandemic still taking its toll on society.

What is unquestionable is that right out of left field, Rain have produced one of the most distinctive and atmospheric albums of 2020. You simply will not hear anything like it this year, but it’s hoped we hear a lot more from Rain in future.