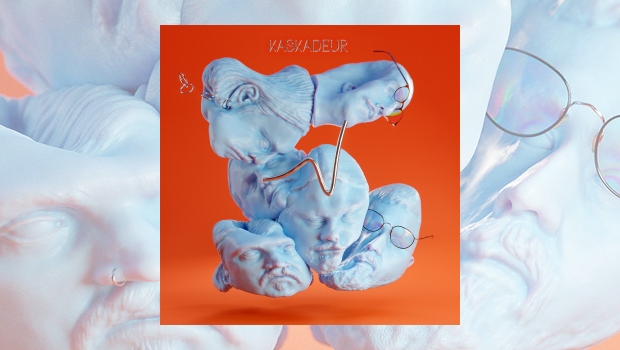 After having recently reviewed New Zealand’s Cut Off Your Hands, I moved on to Germany’s Kaskadeur. Their recent release, Uncanny Valley, is an absolute delight. Both bands play a brand of funky and dubby art rock with powerful pop hooks that is a joy to listen to. Kaskadeur veer more into psychedelia than post punk, but overall the vibe is one of unbridled enthusiasm and fun. And in the annus horribilis that is 2020, an injection of fun is sometimes just what is needed. The band’s roots in stoner rock definitely shine through, but the album veers all over the place, while somehow generally maintaining that funk and dub base. Imagine a mix of Atrox and Beardfish, and (despite Kaskadeur never really sounding that much like either), you might come close to the glorious near-anarchy of Uncanny Valley. Alternatively, a far less extreme The Hirsch Effekt engaged in retro funk.

Before I even begin to write more about the music, can I address the cover art? It’s absurd and beautiful. Did I choose to listen to this album because of the cover? I suspect I probably did. I have so much music on my plate, it’s sometimes overwhelming (in a good way), and on occasion it is the cover art which decides for me whether I’m going to bother listening, so full credit for such an attention-drawing design! And it seems an appropriate metaphor for the music within anyway – twisting and distorting what we know and expect, into new and different forms. An orderly chaos, that creates mutations in a playful and pleasing manner.

So, into the Uncanny Valley we ride, full-throttle, pedal to the metal, and other assorted clichés. Kaskadeur take us on a tour of their fusion of stoner, math, jazz, prog, psych, krautrock, and more, much more than this (they do it their way). What makes this mashup of sounds really work is the pop sensibility Kaskadeur seem to have employed. I’m not just talking about the pop hooks that used are judiciously and effectively, but the overall sense of “decluttering” (for lack of a better word). Again, like Cut Off Your Hands, there seems to have been a conscious decision not to overwhelm, and allow all the subtleties of the rhythms and compositions room to breathe. I used the term “restrained chaos” in my review for Cut Off Your Hands, and it applies just as well here.

Uncanny Valley is a relatively short album, as of its eleven tracks, only six are full-length pieces with the remaining five short introductions or interludes. At barely half an hour, it definitely doesn’t outstay its welcome, but perhaps surprisingly neither does it seem too short. The shorter tracks (only the first of which “stretches” over a minute) are not at all, in my opinion, filler. I love the twang of _valleywaltz that introduces the title track, and really heightens the impact when it crashes in. Uncanny Valley distils the album into one track, pop wrestling rock, and simulacra competing with substance, before disintegrating into [least_mean_squares] – which introduces the percussive and dubby vibe of the following Flashback Fatkids. The contrast between the bass-heavy groove and the organ is sublime. And then it all falls away in the mid-section quite unexpectedly. Not only is the album full of twists and turns, but even within the individual tracks one can never quite be sure what might occur. Flashback Fatkids lurches back into a sludgy groove and gives the appearance it’s going to stagger out like a zombie on acid. But, again, appearances can be deceiving.

apply_physics() is probably my favourite of the interludes, and I do kind of wish they’d fleshed this one out a little more. But hey, who can really complain once Part of Your DNA kicks in. It has a maniacal exuberance to it that is irresistible. Definitely one of my favourites on an album chock full of contenders for that honour. Strangely, at this stage, I get the distinct impression I’m listening to an album made for vinyl – and yet it appears to be available only as a download or a compact disc. The reason for this is that the following snarc’51 is the first interlude to feel disconnected to the previous track, almost as if it is actually the introductory number of the second side of an LP. The one thing I really do love about these quirky short passages is the way they pull together the album, giving it a real sense of cohesion by introducing and reprising elements from the longer tracks either side. I’m not sure if it’s deliberate, or if I’m inferring rather than the band implying it, but it really does feel like listening to two sides of a record, and it’s kind of funky. An auditory illusion of sorts, which would seem completely in keeping with the concept of the album as a whole.

And if we’re listening to a second side of a record, then (after the introductory instrumental) The Death of Basic Trust is a barnstorming opening song. Another favourite, with its dub groove and organ incursions. Honestly, without wishing to detract from the other two members of the band, my two favourite aspects of Kaskadeur are the drumming of Ole Fischer and keyboard playing of Johannes Walenta. The percussive delights of The Death of Basic Trust flow into the final interlude of the album, #nearest_neighbour(searching), which is another instrumental a little too short for my liking, but again I immediately discard that thought once the following track commences. Spacegear Awayteam is the longest track on the album, and deservedly so. Its length allows it to be expansive and exploratory. There are definite spacey vibes to this track, particularly towards the end, making it well titled. The final sections are amazing, and the crescendo without climax is breathtaking.

The album could easily have ended there, and part of me wishes it had. Not that Bonzen Haben Alles is a bad song. Far from it! But it can’t help but be a little anticlimactic after Spacegear Awayteam’s brilliant, and very final, conclusion. I can’t help but wish the two songs were sequenced in the reverse order. But honestly, if that’s the only criticism I can come up with (and it really is), then it’s hardly a deal breaker. The album flows beautifully, even taking this one quibble of mine into account, and the band has very clearly put a great deal of effort into making this a very cohesive whole, despite its truly disparate parts.