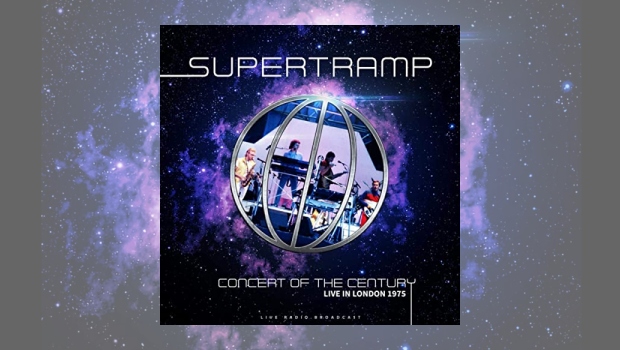 OK, quite a few Supertramp live albums have already been released in recent years. And yes, Paris from 1980, with the legendary 1979 concert recorded at Pavillion de Paris, will never be surpassed, in my opinion. It may even be included in the list of ‘best live albums ever’.

Nevertheless, we were recently surprised with the release of 45 year-old live material from the British rockers entitled Concert of the Century: Live In London 1975.

This album has a special history. Once released as one of the band’s first live bootlegs, from an FM radio broadcast on the “Super Golden Radio Shows” series. And much later, in 2001, released with the title Is Everybody Listening?, incorrectly describing the recording as being from a 1976 concert that took place in Cleveland, Ohio. While this is indeed a show from 9th March 1975 at the famous London Hammersmith Odeon, rock temple during the Crime of the Century tour. The special feature lies in the fact that there are four songs from the then unreleased album Crisis? What Crisis? as part of the set. Finally, this selection of songs was also released as a bonus disc on the Deluxe edition of Crime of the Century in 2014, entitled Supertramp Live at Hammersmith Odeon 1975.

So much for history. Furthermore, it is mainly a repetition. The well-known songs from Crime in particular, supplemented with a number of new songs from Crisis and the lacklustre alphabet song by ringmaster John Helliwell. Twelve songs with a total playing time of 75 minutes. Despite the perfect sound, “Tramp” as always remains very close to the originals and rarely allows free interpretation, let alone improvisation. It doesn’t really matter, the fans only want to hear the unadulterated original studio versions, and that’s exactly what they get, to a large extent.

Is there any added value in this album? Unfortunately, the answer must be a resounding “No”. Or it’s made clear once again how versatile this band was and how close-knit their live shows sounded in their heyday. And, just as important, the fact that their contribution to the 1970s soundtrack should not be underestimated. Just like perhaps one of the most amazing album titles ever, more topical than ever in these troublesome times: Crisis? What Crisis?