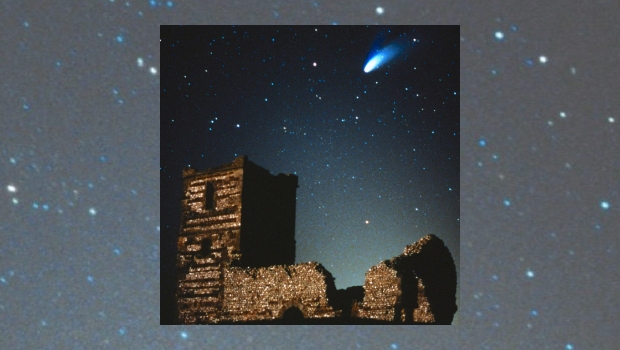 Galahad have re-released their eclectic 1998 album Following Ghosts in an impressive 3 CD expanded edition. Galahad are rather a conundrum. Born in the ’80s era following the so called ‘neo-prog’ wave of the likes of Marillion, IQ, Twelfth Night and Pendragon, there could be assumptions that this is a band firmly rooted in the old ‘Prog’ tropes of the ’70s. The Arthurian style band name probably has not helped the cliched misperception that this is a band steeped in sword and sorcery (although apparently the band name was actually inspired from an altogether more mundane source – an invoice from a fruit and vegetable business!). However, in reality Galahad are a truly musically adventurous band who have always challenged themselves (and their fans!) to expand their boundaries with a wide range of styles and influences imbued in their work.

Following Ghosts is a fine example of the diversity and experimentation explored by these artists. In the context of the times in which it was released and the history of the band, it’s quite an achievement and a significant release for them. Lest we forget, the 1990s was the decade in which ‘progressive rock’ was the ‘music that dare not speak its name’. The mid-’90s was a rather torrid time for Galahad. Their third album Sleepers, released in 1995, had taken 5 long years to pull together and apparently nearly led to their demise, and certainly lost them some momentum. In that context, Galahad then had to deal with the departure of their original keyboardist Karl Garrett. However, this change in line-up was also an opportunity for the band. They recruited Dean Baker, who had little heritage in or particular liking for the classic ‘Prog’ bands – this was an advantage for the band as they wanted to reinvigorate themselves with new and different musical ideas. Baker had an immediate effect on the band’s sound, writing many of the songs with vocalist Stuart Nicholson. The result was an eclectic and wide ranging album – ironically the idea that a ‘progressive rock’ band may actually ‘progress’ and expand their musical palette was difficult for some to accept at the time. It will be interesting to see if this expanded re-release allows some justified re-appraisal of the aspirations and qualities of this album in hopefully a more open minded musical and tolerant climate.

The album opens with the prog metal riffage of Myopia which sounds HUGE, subsiding into rather gentler territory. Stuart Nicholson’s fine vocals melodically sweeps the song along with an ear-worm chorus (and perhaps one of the only references to ‘3-ply tissues’ in rock history?!). Richard ‘Titch’ Roberts throws in a manic violin solo towards the end and then, breathlessly, it abruptly stops – quite an opening. Imago is a much more subtle and stately composition with delicate acoustic/Spanish guitar and synths. Roy Keyworth provides a majestic electric guitar solo and Baker orchestrates the piece perfectly to underpin Nicholson’s heroic voice.

Following Ghosts is an album also suffused with personal feelings. Vocalist and lyricist Stuart Nicholson has recently shared that the two-part A Short Reflection on Two Past Lives is about the loss of his ‘Nan’ and Aunt. In the re-recorded version on the Alternative Ghosts set, he mentions the names of those the band have lost, including their now sadly deceased bass player, Neil Pepper, who died nine years ago, and his father who died when they were originally recording the album. It’s a touching tribute. The song also characterises Galahad’s diversity on this album. Part One is a bucolic, pastoral number with the sound of running water, gently strumming acoustic guitars, accordion-style keyboards and a delightful flute from Sarah Quilter (now Boulter) with a heartfelt lyric from Nicholson. Part Two is rather more strident with a building, throbbing wave of keyboard sounds and a restrained melodic Keyworth guitar solo flying over the piece. Meanwhile Spencer Luckman pounds out the inexorable rhythm as the song rolls onwards. Two VERY different takes on the expression of loss, and typically contrasting perspectives from Galahad.

When a band leaves its comfort zone the results are not always totally convincing or successful, which is shown in the over extended techno-dance beats of Ocean Blue. Galahad just didn’t sound comfortable in that mode, but credit to them for stretching their envelope. Nevertheless, it was kind of a relief to next hear the dreamy ‘comedown’ feel of Rejuvenation, featuring the breathy vocalisations of Sarah Quilter. Much more successful is the Eastern-tinged Karma for One which builds into an exotic interplay between Baker’s swirling synth and Quilter’s swooping flute over a crunching rhythm set by Neil Pepper’s chunky bass and Luckman’s thumping drums. In contrast, Perfection Personified is a lighter rock/pop song with Nicholson’s melodic voice smoothly carrying this much more accessible piece, embellished by a fluid guitar solo from Keyworth. Easier Said Than Done comes across like some sort of ornate classical piece, echoing The Beatles’ Eleanor Rigby, with Roberts’ violin, Quilter’s clarinet and flute alongside Baker’s keyboard orchestration serving as a delightful bed for Nicholson’s sweet vocals.

The range of different influences on Following Ghosts is exemplified on the two extended pieces, Bug Eye and the closing Shine, which both brim with a heady mixture of sounds and styles. There is something eerie and otherworldly about Bug Eye, emerging from shrouds of synth and drum effects to build and build atmospherically, with spectral guitars airily floating above. Stuart Nicholson also recently shared that this song is based on a conversation he had with a close friend, Ann, about pregnancy and how it felt:

In the opening section, short pieces of conversation can be heard in the background, which are sound bites of Ann and her husband Chris talking to Stu Nicholson in their kitchen, which gives this unusual piece an even more subtle personal perspective. Nicholson has revealed that the striking colourful scan of an unborn baby on the back of the CD booklet is actually a scan of Ann and Chris’ baby, Mary, now a young woman in her mid-20s!

The peculiar atmosphere continues to develop and then recedes into the mists… before a Massive Attack-style drum and bass, synth driven section kicks in, which is rather unexpected in this bewildering but imaginative piece. If you think that’s unexpected wait until the monastic chanting seeps in and takes over! Sarah Quilter’s dreamy vocals float in before the piece recapitulates to the main theme. Bug Eye is a truly ambitious piece based on an intriguing and beautiful concept – what’s more beautiful than a new life?

The subject of beauty is explored further in Shine. Nicholson states that Shine is about an old school friend who is extremely pretty and a lovely human being, but has had to deal with rheumatoid arthritis from a very young age. This limits her to a wheelchair at times, but her beauty as a ‘gorgeous human being’ still shines out. The opening section is conveyed with gentle piano, synths, acoustic guitars, subtle percussion, and delicate vocals. The tempo and volume increase to convey the pain of her condition, but the overriding feel is of serenity as the piece gently recedes into a dream-like sequence. Galahad drift off into a surreal world of gentle percussion tripping along with a subtle softly chiming guitar melody and echoing vocalisations against a synth wash, immersing us in a blissful vision of beauty. It’s imaginative, dream-like, beautiful and epic… but not remotely ‘Prog’. The dreamy section ends with a brief Keyworth guitar solo, rising like a dolphin leaping from the ocean, leading to a return to the main theme and climax. This is a song which creeps up on you – it didn’t make sense to me initially but once you go with the feel, and allow it to wash over you conveying the shining beauty then you ‘get it’.

In this expanded release, Galahad have also provided an additional set of recordings of the album songs, completed between 2014 and 2018, largely with more recent band members Lee Abraham on guitars and Mark Spencer on bass and backing vocals. These are updated versions, produced with Karl Groom of Threshold, who also provides acoustic guitars on a couple of tracks. Some versions certainly benefit from an upgrade, particularly Karma for One which is much crisper and more atmospheric. Mark Spencer’s more spectacular orchestrated Perfection Personified is much grander, featuring a great Lee Abraham solo, and comes across almost like some sort of James Bond theme! A Short Reflection on Two Past Lives – Part Two is presented with a less stately tempo and a more distinctive Baker keyboard in resplendent style. Opinions may vary as to whether some of the newer versions improve upon the originals – in all honesty, I missed the extended mid-section and dreamy sequences of the original Bug Eye and Shine on Alternative Ghosts, but all the versions give interesting new takes on the songs. They underline their general high quality, in whatever manifestation they are heard.

In addition Galahad also include a remastered edition of their experimental De-Constructing Ghosts album, which came out originally in 1999, under the name of ‘Galahad Electric Company’. One can only imagine how some fans may have felt about this release back in the day. Other musicians, DJ’s and mixers took the pieces from Following Ghosts and sometimes produced completely different songs. Some versions sound rather dated now, and something like Karma Divine just doesn’t work for me at all. However, some are more successful, such as the Imago Separation Mix by ‘Dub Rumble’, which sounds absolutely immense and very ‘Tribal’ with Nicholson’s vocals eerily treated. Whisper it quietly but I much prefer it to the original. This third set is an interesting sub-plot in the Galahad story and reveals their open-mindedness and desire to try new things all the time, although it is doubtful this curiosity will get many repeat listens from most fans.

Following Ghosts expanded is a high-quality re-release that goes beyond a cursory ‘polish up’. The whole package is well presented with insightful essays from Stu Nicholson and Dean Baker, alongside other interesting pieces in the booklet. The artwork includes the original striking picture of Knowlton Church inside a Neolithic ring with the Hale Bopp comet shining across the sky above. Nicholson has shared that the intention was to contrast the Ancient on the front with the picture of the New Life of the embryonic baby Mary on the back of the album booklet. In essence it could be said that this concept underlines the whole album with a mixture of the older with a desire to reach out for the new. Existing fans will be interested in the excellent sound of the remix and remastering by Karl Groom, alongside the re-recorded and rather different versions on Alternative Ghosts. Newer listeners will hopefully be drawn in by the thought of a band who wanted to challenge themselves and experiment. The strengths of Following Ghosts, however, may also be the source of some of its flaws. There is definitely a great diversity across the songs, but for me maybe the album lacked that central golden thread drawing it all together, although that’s a minor quibble. This is the sound of a band clearly unafraid to go outside their comfort zone and try new things. Definitely worth exploring, Galahad may be one of progressive rock’s most misunderstood bands. Their ambition to experiment is beguiling, and in Following Ghosts it’s great to hear an excellent progressive rock band that was actually daring to …well, ‘progress’ – novel idea, I know!