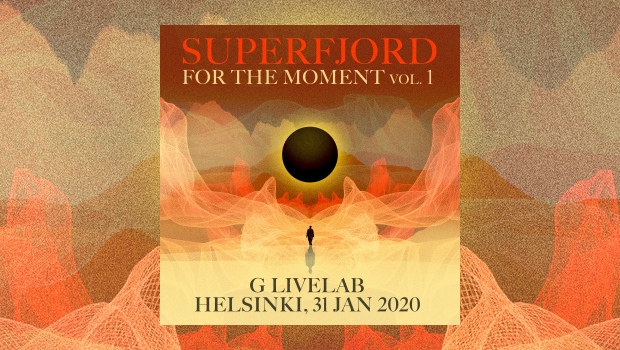 Superfjord – For The Moment, Vol. 1

I was introduced to Superfjord with their second album, All Will Be Golden, back in 2018, and have been hankering for more from the band ever since. As per their Bandcamp, the band’s latest release, For The Moment, Vol. 1, “is the first release in a digital series of live recordings that aims to capture Superfjord at their purest and most improvisatory.” And what a tasty way to whet my appetite for further volumes in this series!

For The Moment, Vol. 1 contains three improvisational “moments” along with a lengthy jam of Rainbow from All Will Be Golden, and, although that album had structure, listening to it always feels as if it is a natural combination of composition and improvisation. The music of Superfjord is fluid and organic, and For The Moment merely takes that template and runs with it. If you put Santana, Camel and Pink Floyd in a blender, added a pinch of Tool, then sprinkled some sexy brass over the top, the resulting sound might come close to that of Superfjord on All Will Be Golden. It’s groovy, it’s funky, it’s heavy – it’s a trip. So how do they sound, when improvising on stage?

Superfjord, in this live incarnation, comprises six obviously talented musicians, who clearly know each other inside out, and lock into a groove with ease, churning out hypnotic riffs and rhythms bursting with cosmic bliss. But while there is an undeniably jam nature to the band, they never find themselves stuck in a repetitive groove, the way some psychedelic bands do. They paint from a wide palette, and create some quite incredible soundscapes. The line-up is mostly the same as that from All Will Be Golden, with four of the core musicians and one of the guest musicians from that album also on this live album. Three of Superfjord provide percussion on both All Will Be Golden and For the Moment, which indicates the importance of beat and rhythm in their music.

Perhaps strangely, then, the first Moment of For the Moment has very sparse percussion to begin with, with the stars of the show being some wonderful interplay between guitar and keyboard, backed solidly by some very tasty bass. The drums certainly pick up, though, and while they’re back in the mix, there’s no doubting their groove. The use of space in this piece is great. Superfjord show that they are just as aware when not to play a note, as when to – which I often wish more bands would consider. It also means that when the guitar goes into overdrive about halfway through, it has far greater effect and impact. As the guitar quietens down, the bass and drum are briefly in the spotlight, before the sax comes to the fore. There’s something about sax that seems to elevate any piece it features in, for me. It gives this moment a perfect ending (though I’m not entirely sure if it was the ending on stage, as the music fades out while giving the impression it may have carried on for some time yet).

The second Moment begins with some almost Doors-like psychedelic sounds, before the sax blasts out of the way any such comparisons. In terms of tempo, this quickly becomes almost the complete opposite of the opening Moment, and I’m glad it eases the listener in as it would perhaps be almost too much to take if it kicked straight in after the laid-back bliss of Moment 1. But it’s not all high-tempo. I’m actually reminded a little of The Velvet Underground’s Heroin, in the way the music picks up, then comes down again. After the hit, the tranquil passage that follows is stunningly beautiful, and again all about space. There’s an almost minimalist feel to it, with as much not being played, as is. This is definitely my favourite Moment of the album. It must have been incredible to watch it being played.

Towards the end of Moment 2, you can hear Rainbow beginning. When I first listened to the album, I had to check to see if it had already changed track. The segue is seamless, and explains why Rainbow is included on this album. (I had wondered, when I first saw the track listing, given that the album was of improvisational moments, yet included an album track – even if it was obviously significantly lengthened.) If I needed any more reason to love Moment 2, I guess this is it. The origins of Rainbow within the dying minutes of Moment 2 are subtle, yet brilliant. As for Rainbow, this jammed out version blows the album version out of the water. Essentially, this Rainbow is another Moment, which merely takes the original Rainbow as a platform from which to take a leap into further improvised jamming.

Moment 3 follows on directly from Rainbow, making Moment 1 the only standalone piece on the album. It’s another minimalist beginning, almost ambient were it not for the sax. But after the aural overload of Rainbow, it’s a welcome change of pace. Soon even the sax quiets down, and the music becomes expansive and unworldly. Even though not a lot is happening, I absolutely love this passage. The beat starts to pick up, in tempo and volume, and it’s a percussive delight to listen to. I find it impossible to not start tapping along to the rhythm. It’s infectious and mesmerising. From this point, it’s possibly the closest the album comes to hitting that too repetitive groove. It redeems itself somewhat in the last minute, but ultimately I find this a dissatisfying way to end the album.

It’s only my opinion, of course, but I think if Moment 1 had been the closing piece, rather than opener, for this album, the whole would have been better served. But as Moment 1 is standalone, there’s nothing stopping me from making it the closing number, so my only criticism of the album is rendered redundant! Basically, this is an outstanding album of improvisational jams, and if future volumes of this series are as good as this first release, then fans of Superfjord are in for some real treats! 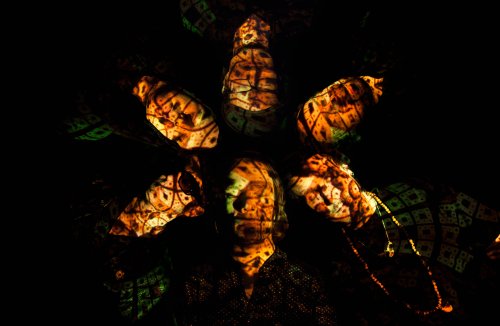