Trey Gunn should be a very familiar name in Progressive Rock circles, mainly because of his involvement with King Crimson during the ‘double-trio’ years. Since then he has been involved in various projects (including the Security Project, a re-imagining of early solo Gabriel songs), solo albums and film soundtrack work. So what has Trey Gunn been up to since lockdown? Well, he’s been busy in his home studio, and the first fruits of this studio time are presented here in the form of two new albums, recorded on consecutive evenings and released simultaneously. Both are solo guitar recordings using his trademark ten-string Warr touch guitar, and both sound entirely different.

Trey has always been somewhat adventurous and innovative in his approach. You only have to listen to Modulator, his version of the Marco Minnemann ‘Normalizer 2’ project, to know he is keen to push boundaries. The first of these two albums, Punkt, is certainly not easy listening. In fact Trey says of the album, “it will reward detailed and repeated listening, and punish casual listening”! He doesn’t lie. Punkt is abstract, angular, prickly and unsettling. It is uncompromising in its jagged picking, notes, jabbed from his instrument in a percussive manner. There is an almost hypnotic rhythm to some of the seemingly random notes plucked from the air. There is no discernible melody at play, and yet there is a strange beauty in the juxtaposition of the sustain and the almost frantic scrabbling and scratching. There are repeated phrases to hold onto, and hold on you must or be lost. Some of these (mostly) short pieces somehow build up a momentum that transfixes, and once you are drawn in, it’s hard to escape or ignore.

Rather like wandering through a gallery of modern art and dismissing works that don’t have immediate appeal with hardly a second glance, a cursory ear cannot appreciate what is going on here, but there is a soul to this work which needs to be discovered with patience, so to that extent, Trey was right. I almost had to MAKE myself listen to this a second and third time, but I’m glad I did because it makes more sense now, and is a rewarding listen.

Firma, the second collection, is quite different, and more accessible, but these things are relative! Where Punkt was angular and sharp, Firma is a mellifluous waterfall of guitar notes, a soothing shower of sound cleansing the fevered brow and bringing forth a calmer atmosphere altogether. Second piece Ancient of Days, by far the longest track on either album, is a fine example. It begins with a phrase which sounds slightly awkward at first, but after being repeated several times, becomes easy on the ear and forms the basis for a mesmerising nine minutes of sublime variations on the theme. It is brilliantly bewitching and the perfect way to forget the troubles in the world and simply meditate on the soothing and healing power of music. Many other tracks begin with a flurry of notes, as if trying to be assured they have your attention, before calming somewhat and wandering in other directions. Notes are considered and placed deliberately in your ears for maximum effect; never a wasted lick, and no showboating whatsoever. The set glides past too soon, and in the silence, the real world allowed to emerge once more.

I can honestly say that these two releases have really surprised me. I rather expected them to be too hard to grapple with successfully, but I’m happy to report that my attention span is not as short as I’d feared, and it is rewarding to rediscover the virtue of a little patience. That Trey Gunn could record something as interesting and engaging as this on two evenings a few short weeks ago is nothing short of amazing. It makes you wonder what he’s been up to since then? I wouldn’t be surprised if there weren’t more where this came from. One man and a guitar. Hallelujah. 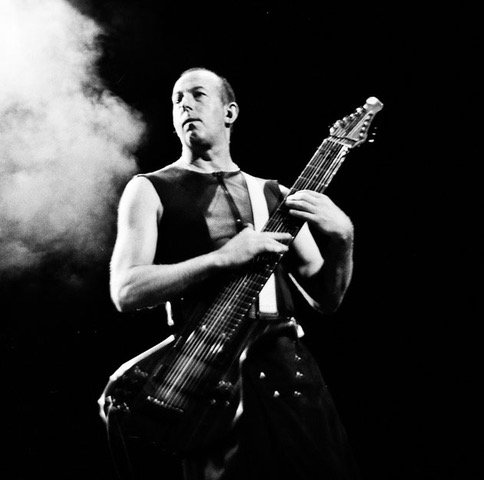