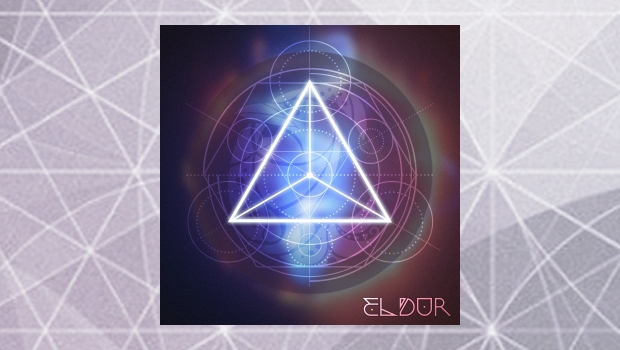 New Zealand band Coridian released their third EP this year, from a series of four – each loosely conceptually based on one of the four classical elements. Each EP has been longer than the previous, so the final one (hopefully to be released late next year) may well be approaching album length. Every EP has also been an improvement on the previous ones, and that almost seems intentional. It might be a stretch, but perhaps Oceanic was Coridian diving in, treading water until they could find their footing. Caldera saw the band find their ground, and Eldur is the band sounding red hot. I’m prepared to be blown away by the next offering.

However, while this is Coridian’s “fire” album (‘Eldur’ is Icelandic for fire), this is not incendiary stuff. It’s not a raging inferno, so much as sparks and embers – and is all the better for this more subtle reading. There’s a lot of restraint and expansiveness that you wouldn’t get if the album was an intense conflagration. The perfect production and mix gives a lot of space, enough room for each instrument to breathe, without enough oxygen to let anything blaze too brightly or overpoweringly.

Two songs in particular, while not necessarily the best on the EP, nor my favourites (which are probably Seed II and Mantra), really show how well Coridian have linked the idea of fire to overarching ideas of life and death. The first of these is Good, For Nothing – and yes, that punctuation is necessary. The song compares those that do good, for nothing, and those that are good for nothing, and how both are sometime visible and sometimes not, when it comes to social media. Early on in the song, the line “light from a spark” shows the idea of fire as a metaphor for personal growth (which is more or less the metaphor used for the EP as a whole). It’s easy to be lost in the dark, but if we allow ourselves to be guided by the light from a spark in that dark, we can grow and raise ourselves out of the darkness. It’s not made overt whether that spark is internal, or whether it comes from someone else, and that’s possibly deliberate, because ultimately where the spark comes from is not really relevant.

The song is a salute to altruism, to be good to others, expecting nothing in return. To stop splitting ourselves, perpetrating an identity on our social media that may not be real. Ignoring the social media influencers, who definitely are not real. The artifice of social media is ephemeral, like a flame, flickering and stealing attention. The difference between being good, for nothing, and being good for nothing looks into the hypocrisy of social media, and it is perhaps more relevant in present times that Coridian could’ve ever have imagined when they wrote it. There’s a real resonance in the idea of those who do something that can be seen by others, but which does not really do anything at all. In the UK, this could be seen by those who chose to stand outside and clap for the NHS every Thursday night, or to praise Captain Tom Moore for walking around the garden. It sounds a nice thing to do, but it was a platitude at best, and a distraction from how little was really being done to help those working for and within the NHS. There’s a cartoon that’s done the rounds many a time of someone clicking a like on a photo of a sunset on social media, while right outside there is a real one he could appreciate. If, like Steven Wilson, you are tired of Facebook, give this song a whirl…

The next song that I felt really showed the concepts of fire and of life and death is The Witness. Whether or not that is the self being witness to their own life, or that of a greater power, is unclear. (There are a lot of spiritual references on Eldur, none of which are overtly Christian, but I definitely wouldn’t be surprised if I found out that some or all of the band are Christian.) There are two lyrical references to fire that I heard in Witness, and the second of the two is quite clever, and quite beautiful: “from an ember to an eldur”. It’s a great play on words that I don’t really think needs to be explained. I’m reminded a lot in this song of Simen Lyngroth’s album which I recently reviewed (coincidentally which had the protagonist looking for a spark). That album, and this song, urges the listener to live in the now. To be present. Because if you keep looking for the future, and worrying about what is to come, you will miss out on your own life.

While all this might sound heavy stuff, Coridian plays it with a light touch. Though the band reminds me of heavier bands like Tool and Karnivool, I’m also reminded of bands like U2 and (fellow New Zealand band, although no longer active) Midnight Youth. At other times I’m reminded of 30 Seconds to Mars, or to Silverchair. There are singalong anthems and ear-worms throughout Eldur. And some real grin-inducing moments – for instance when the gang vocals hit in all their glory after the awesome bass-driven bridge in Rite of Passage – and while I suspect for many that the star of the show will be vocalist Dity Maharaj, what I find myself really honing in on time and time again is the rhythm section of Kris and Nick Raven. A lot of the time, third Raven brother Mike is left playing the role of Adam Jones. His guitar textures are obviously important, and instantly identifiable, but play a secondary role.

There is one song, though, when Mike really shines. The piano and acoustic guitar led Lost Heroes is absolutely marvellous. It follows a tune similar to that of the earlier Define (Interlude), being simple yet beautiful. Define and Lost Heroes effectively bookend The Witness, giving it even more importance – and it clearly is important, as it is effectively the title track, as shown by the title of the EP being appended to The Witness in parentheses.

I can honestly say that this is the best release yet from Coridian. It’s really pleasing to see the band gaining international notice this year with it. With any luck Eldur will push Coridian to greater recognition and a larger audience. Without doubt they deserve it. For too long, as a Kiwi, I’ve seen Aussie prog put on a pedestal and promoted, knowing there are plenty of great bands from Aotearoa that are just as good. It was really pleasing to see two New Zealand bands appearing on lists of the best albums so far in 2020 on DPRP (City of Souls and Outside In). It’s Coridian’s turn now. If you liked City of Souls or Outside In, you’ll likely like Eldur, too.