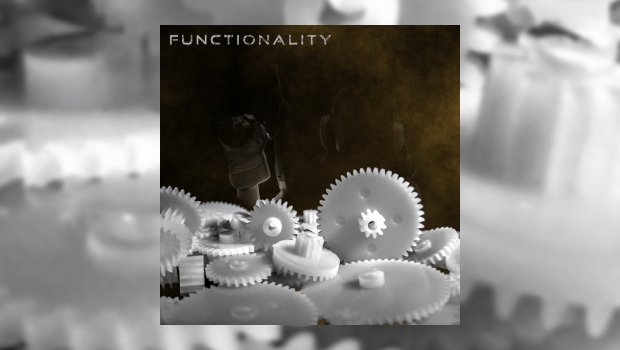 For three years, Roman Spektor has been working on his debut album, Functionality. It was released at the end of April and is Roman’s first release since the three track Moss EP released in January 2016. That EP showed the willingness for Spektor to experiment with quite different sounds and styles, but didn’t really work for me. There was definite promise, but much of it sounded forced and unnatural and didn’t sit well with me. I found the first track to be almost hard to listen to, and not particularly enjoyable. The title track was far more to my liking, and the final track quite nice, even when it explodes towards the end. As Meatloaf once sang, “two out of three ain’t bad”, so I made a mental note to remember Spektor’s name, should I ever see it again. So when I came across Functionality this year, my first thoughts were to wonder which of the three songs from Moss it might sound most like. The answer is none of them – or, perhaps it is actually that first track, which didn’t gel with me years ago. But everything not quite right with Calm Waters is made right with Functionality.

The opening track, Checkbox, bursts into being with a sound immediately reminiscent for me of bands Chris Pitman has had a hand in, particularly SexTapes for whom he was the frontman. Pitman is perhaps unfortunately best known for being one of the longest serving members of Guns N’ Roses, but he’s an incredibly talented multi-instrumentalist, engineer and producer that has lent his talents in one capacity or another to Tool, Failure, Lusk, Replicants and Zaum, among others. This is an electro-industrial-grunge banger, heightened by Roman Spektor’s suitably grungy and glitchy vocals. This is like some glorious mix of Failure, Nine Inch Nails, Alice in Chains and Portishead.

Roman Spektor began his musical journey with hip hop, making his own beats, and those roots have clearly never left him, lending this album hints of hip-hop and trip-hop throughout, adding variation and interest to an already intriguing eclecticism. The trip hop may be in the background on Checkbox, but it’s far more overt in the following Thank You Father. And yet, there’s a distinct neo prog vibe to this track too. So, alternative trip-hop neo prog? Do you know what, I’m really not bothered if I can’t pin this music down to any particular genre. Roman Spektor delights in not only effortlessly switching between styles throughout the album, but overlapping them within a song. That the whole still sounds so cohesive and coherent is quite a feat.

Look For… continues the trip hop vibe, and also features guest vocalist Didi S.B.. Her vocals are truly beautiful and bring an extra dimension to the song. This impact is heightened by the vocals not being immediately introduced, the ‘beauty and the beast’ harmonies particularly effective. Binary, which follows, sounds like it belongs in a soundtrack, and reminds me a lot of another trip-hop infused album from this year, Romsam Malpica’s The Wolf and the Skull (as The Folsom Project). It segues into the title track, which initially sounds equally cinematic, until the chorus hits.

Although I actually very much like Functionality (the song), it does show the only real negative for me with Functionality (the album). The dynamic range just doesn’t seem great enough, the whole album sounds remarkably “even” (for lack of a better word). The title track ought to leap from its quiet moments to its roars with far greater effect and impact. There are several other songs where I feel the dynamics could be improved upon, including the following Tiny Virtual Mouths, which is minimalist and delicate – but not quiet enough. Ultimately, however, none of this really spoils the enjoyment that the album gives. There is more than enough promise to assume that future albums from Spektor will definitely be worth looking out for!

Passivity brings back the neo prog vibe, albeit underlaid with some nifty hip-hop beats. Selling Doors follows, sounding more reminiscent of Kid A-era Radiohead, with a vibrant jazzy syncopated beat. The saxophone of guest musician Gali Spektor is as welcome and enjoyable here as it was in the title track. The instrumentation is stark and dark, and Spektor’s vocals echo this, sounding almost desperate. Spektor’s vocals work very well in this way throughout the album, adding tone and timbre to the songs that heightens tension, or drives them forward. It seems everything has been meticulously planned so that everything fits in its place, and nothing is there if it does not serve the purpose of the song. Whether acoustic and organic, or electronic and manufactured, the instrumentation and percussion, along with the vocals all feel entirely natural. Nothing is out of place. It all belongs. Again, and I hate to belabour the point, the only thing that doesn’t feel quite right at times is the dynamics.

While I have been reminded of Ulver several times already, it is only with Docks that I really get that vibe – and yet, the music is still so different from anything Ulver has done that I would not even be confident to suggest that Ulver might have been an influence. (To use that band as an example, they reportedly had not heard any Depeche Mode before recording their Julius Caesar album. Influences are often inferred, rather than implied.) The thing is, Roman Spektor makes so many jumps in style and sound between songs, let alone within them, that of the many bands I might be reminded of, he might be influenced by any of them, or none of them. He’s managed to create a quite unique sound, that can’t really be mistaken for anyone else, no matter who it might remind me of.

And saying that, the album ends reminding me once more of Chris Pitman, though not in such bombastic fashion. If Checkbox reminds me of Sextapes, then Cut the Cool Air reminds me of Lusk. It’s a gorgeous final track, which ends the album leaving me wanting more. The songwriting, performance, production and mixing on the album is all by Roman Spektor, so hopefully he won’t take my feelings about the dynamics of the album to heart. It really is my own criticism about the album, and it’s not a big one. I gain a lot of enjoyment from listening to this debut album from Spektor, and am still listening to it a lot. Roman Spektor’s bio states that with Functionality’s “unusual soundscapes, and undeniably catchy melodies, it is the perfect introduction to the adventurous artist’s world.” I can’t disagree, and I can’t wait to hear what comes next.