What are the odds? Your new album, a concept work about the final days of a civilisation facing an impending doom, is released in the middle of a global pandemic that has shuttered the world. Omens feels apt for 2020. While I’m sure Elder didn’t intentionally set out to create a “pandemic playlist”, they did deliver an album that ably fulfils that criteria. It’s an immersive, musically-rich collection that has the power to enthral and transport us beyond the terrors of the present.

Elder have been progressing at a dizzying rate since their stylistic breakthrough release, Lore in 2015, a universally-praised album that immediately differentiated them as a group with their own individual conception. They successfully built on that framework with 2017’s densely-layered Reflections of a Floating World and last year’s sublime instrumental EP The Gold & Silver Sessions. Those releases were the first to feature their expanded quartet line-up with second guitarist/keyboardist Michael Risberg and were a fascinating glimpse into how these musicians could apply themselves to very different concepts. Whereas Reflections of a Floating World was incredibly detailed and complex from an arrangement standpoint, The Gold & Silver Sessions relied on simpler, groove-based structures, using the extra air in the arrangements to allow improvisations to develop organically. Omens beautifully melds those different approaches together creating their most mature and fulfilling album to date.

Omens also debuts new drummer George Edert, he replaces founding member Matt Cuoto who decided to remain in Boston after the band permanently relocated to Berlin, Germany. The album also features standout contributions by guest-keyboardist Fabio Cuomo who performs on Fender Rhodes and an array of analogue synthesisers. The addition of these players is extremely important to the overall sound of the band, and based on how prominent the keyboard role is in the arrangements I would venture there’s a good possibility that the group could permanently expand to a quintet in the future.

The album commences with the intense title track which works as a summation of everything that has come before and introduces several new elements that are expanded on further in the ensuing tracks. The expected towering guitar riffs are still front and centre, but now come layered together with synthesiser and Hammond organ, creating a giant monolithic wall of sound. The maturation in their arranging dynamics becomes apparent with the lilting instrumental section about a third of the way in, it’s a beautiful intermission highlighting the deft interplay between the guitarists and allows for an impactful build into the final sections of the piece. I’m especially fond of the intricate uptempo riff that comes in around the 8-minute mark and resolves into an appropriately majestic-sounding conclusion.

One of the most impressive aspects of Omens is the emphasis on melody and the maturation in Nick’s vocals. Throughout Elder’s 12-year career they’ve always leaned more heavily on their instrumental side; your average 10-minute Elder composition would generally feature about three minutes of vocals. While that still primarily holds true on Omens, the vocals are now more deftly integrated into the songwriting and Nick’s delivery has improved significantly in the past few years. Comparing vocals on earlier albums like Dead Roots Stirring or Lore it becomes apparent how much more confidence and skill is at play now. Tracks like advance-single Embers and the beautifully progressive In Procession demonstrate how tastefully the vocals have been applied to the overall Elder concept, enriching already impressive arrangements to even loftier heights. Both of these songs are masterclasses in long-form composition and arrangement, each going through a myriad of sections, applying a diverse palette of instrumental sounds and never quite going where you expect them to. Thrilling stuff.

Another element that allows Omens to truly shine is the beautifully-recorded, polished sound provided by Peter Diemel (Motorpsycho). It’s the best-sounding Elder album to date and accurately portrays the scope, complexity and beauty of these songs. Listen to the gorgeous introductory section of Halcyon (my personal favourite track) or the melancholic album-closer One Light Retreating for examples.

Elder’s artistic progression has been a sheer joy to witness over the past 12 years, at this point sounding almost unrecognisable from the teenagers that released a doom-metal concept album about Conan way back in 2008. Omens securely places them in the upper-echelon of the modern progressive/psych-rock movement, an easy contender for album-of-the-year and in my estimation they’re just getting warmed up… 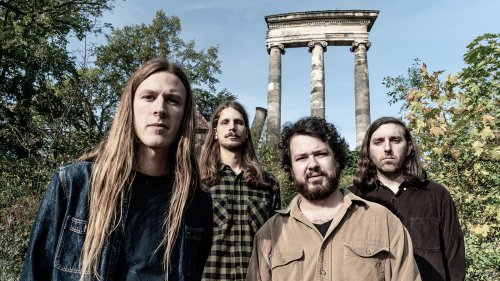