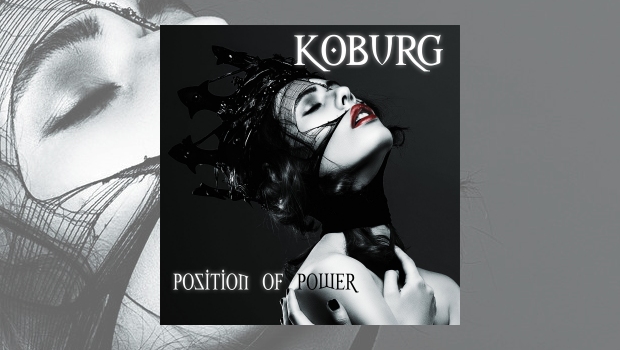 Sponsored posts on Facebook. Always there, rarely given attention. I admit to ignoring most anything unsolicited in my feed, but over the last few days, as an experiment to see just how well Facebook is helping target these posts to an audience, I’ve been following them. I expected to find that some were well off the mark, and maybe one or two might interest me. Shockingly, there has not been a single link I’ve followed where I’ve not enjoyed what I’ve heard. Of course, enjoying something does not mean I’m likely to return to it again, just that it has held my interest enough to keep listening. But some of the releases I’ve listened to off the back of these sponsored releases are more impressive than others. The latest album from London based Koburg, Position of Power, is one such.

There were not a lot of details on the Bandcamp page I was directed to, so I made the effort to contact Anastasia Coburg to find out more. That’s not something I’d normally do at all, but such was my interest. (The change in spelling of Coburg’s name for her musical endeavours is a pragmatic rather than an artistic decision, due to the vagaries of Facebook and their naming conventions.) Anastasia is a talented singer, songwriter and multi-instrumentalist, and Koburg is a solo project in the true sense. I have many “solo” albums in my collection, but very few are entirely the work of one person alone. Anastasia plays all the instruments on her album.

Having listened to new album Position of Power, I went back and listened to the previous album, The Enchantress. The one thing I noticed almost immediately was a difference in the sound of the drums. Upon asking Anastasia about this, the answer only left me even more impressed with Position of Power, and with a whole new level of respect. Anastasia has ME, an “invisible” illness still largely unknown and vastly misunderstood. I have a few friends with ME, and I know how often it can be a struggle to live a normal life. That struggle is usually unknown to most people who come across them. There are good days, and there are bad days, but even good days are not as easy for someone with ME than someone without.

Due to her ME, Anastasia no longer has the upper body strength to play an acoustic drum kit. While she used programmed drums on The Enchantress, she has played an electronic drum kit for Position of Power. ME is a truly difficult condition to live with, and it’s impressive how Anastasia is working hard to keep hers under control so it doesn’t affect her music too much. Given that Anastasia has augmented the Koburg live act with musicians from such bands as Galahad and Twelfth Night, she has no real need to play the drums herself in the studio. By her determination and persistence in doing it all herself, when it would perhaps be easier and expedient to have other musicians help out, it gives an extra edge to the music.

And so, eventually, to the music. It’s symphonic metal, and Anastasia is clearly female, so the obvious impulse is to compare this with so-called female-fronted symphonic metal bands, such as Nightwish and their ilk. Now I’ve never really found any enthusiasm for that style of music (and I dislike the label FFSM even more), so thankfully Koburg is nothing like that. It’s symphonic metal, and female-fronted, but that’s as far as the comparison can be taken. Actually, I hear an awful lot of Queen in the sound (if Queen were a symphonic metal band), and Anastasia’s guitar playing is often reminiscent of Brian May’s.

The opening pairing of The Descent, parts one and two, is an extremely effective introduction to the sound of the album. I absolutely love the industrial, almost ambient opening, overlaid with a choral effect that brilliantly enhances the Gothic sound. The electronic drum kit works perfectly within the first part of The Descent, complementing the sound and feel of the track better than an acoustic kit ever could. At just shy of two minutes, the second part of The Descent begins, and is the first true taste of what this album presents. The Gothic feel, and the spooky choral effect, remain. And if I mentioned Queen as an overall influence I hear throughout the album, this track reminds me of A-Ha.

The electronic drum kit probably aids in this, but I love the way that this album sounds quite contemporary, yet harks back to some of the more progressive pop sounds of the ‘80s. The fourth track is another which plays on this in an effective way, with a Depeche Mode vibe enhancing the symphonic metal sound. I asked Anastasia about her influences, and Queen are indeed a big influence, as are Depeche Mode. Metallica, apparently, are another big influence, but given the only Metallica album I’m familiar with is their much-maligned album with Lou Reed, Lulu, I can’t say that I recognise any of their music in Koburg’s.

Spirit Calls is one of my favourite tracks on the album because it’s so damn catchy. Despite bearing some resemblance to Evanescence (a band I’ve never gotten on with, making it quite surprising how much I like this), this is a really infectious and upbeat track – with some absolutely scorching guitar! The following track is, I believe, the lead single from the album, and is more laid back, with some breathy vocals. I wasn’t sure about it on first listen, but it has definitely grown on me with subsequent plays, and it’s quite beautiful. I especially like the alternate mix presented as a bonus track with this album.

Choose Your Poison begins like a twisted mix of Depeche Mode and The Prodigy, and it’s a bit of a banger. It is the variety of sounds and textures that make Position of Power such a success for me, constantly oscillating between dark and light, brutal and tender – yet remaining a cohesive whole. To hammer this home, All That Is Hidden is another of my favourites, largely leaving Anastasia Coburg’s voice to lead it, and she does have a superb voice, full of beauty and character.

The following song is the sole track which doesn’t do anything for me; Karma Is A Bitch. It has its moments, but even after repeated listens it hasn’t grown on me. The one thing that I really don’t like is the backing vocals, and they grate so much that I don’t think I’ll ever really like this song. But it is only one song on an album I otherwise thoroughly enjoy, and not only do I not dislike it enough to skip it, it only serves to emphasise how good the closing number, As Darkness Falls, is.

Overall, this is a grand and bold symphonic rock soundscape, filled with Gothic, and at times almost industrial undertones. As the music is dramatic and romantic, so are the vocals – lush and emotive. It’s an album from a genre out of my comfort zone which has somehow managed to captivate and stir. As far as I’m concerned, it was worth Koburg’s while to pay for that sponsored post, and I sincerely hope I’m not the only one who clicked on the link.