Geoff Downes is a busy man these days, with his commitment to the ongoing Yes 50th Anniversary tours and a resurgent Asia on the cards, alongside which he is also involved in the Downes Braide Association, who will release a CD/DVD Live in England package on the 29th November. TPA’s John Wenlock-Smith called Geoff at his home in Wales to talk about this and other projects. Read on to find out more…

Yes, I like to think so yes. I like to keep myself as busy as possible, keeps me off the streets.

Fair enough, I note that you have this new DBA album out in a few weeks’ time.

Yes, it’s a live album from a show that we did about this time last year, we’re doing another in February [14th and now 15th February 2020 at Trading Boundaries in Fletching, East Sussex]. I think it is nice to be able to get this out as we’ve done three albums together so far and it was good to be able to put together a nice selection from the three albums in a live setting.

It’s a good album, I’ve had a listen already and I enjoyed it.

It was a very successful event, Chris and I had talked about taking it live, but it was only when we had enough material to do it. It’s been a good project for me, and Chris liked it as well.

Excellent, although it’s a bit more related to what he does I suppose?

Well, I think we met in the middle. Chris was a huge Buggles fan and when I first met him back in 2010, we were doing a few Buggles shows at the time and he got involved with a project called The Producers and said that he’d like to do some writing with me and he moved to the US. I was living in Los Angeles so we started that and out of that came the first DBA album and it all developed from there. 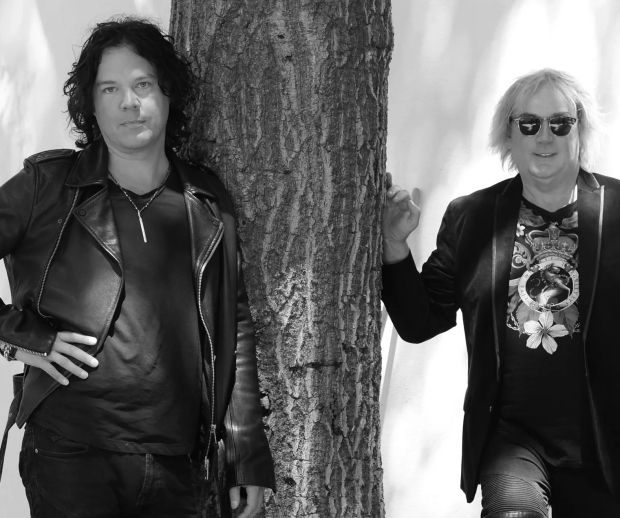 One of our guys at TPA reviewed Skyscraper Souls and his review was so intriguing that I wanted to check it out for myself.

Well that’s good to hear. Well, Chris is a huge progressive rock fan and I started out doing Pop music and moved into Prog. Skyscraper Souls is where we actually showed some progressive leanings more clearly I think, it has pop prog leanings spread throughout it. Chris, of course, is more in the pop world than I am now [Chris Braide, born in Warrington in the UK, writes for artists including Sia, Lana Del Ray and Beyoncé, amongst others]. We meet in the middle in a pop/prog/rock area really.

A good place to be if you ask me, Prog should take in elements of whatever it’s around, and I think to keep going and growing Prog needs to take on new influences as it comes across them.

I think Prog means to keep developing, if you take Yes, their music has developed and grown over the past 50 years. In DBA we try to do that as well and it comes out in the middle as pop rock with progressive aspirations to crossover.

Yes, I think it has lots of potential, but people need to go and listen and discover it for themselves and then spread the word, as it were.

The long song [Skyscraper Souls] is actually paying homage towards the grandiose epics pf the 1970s, we wanted to achieve that in a more modern approach with electronic sounds and stuff. Chris has a fantastic voice and this live album really shows that well, and that’s what we were trying to convey with these songs really.

Who does the introduction on the album? He does some narration in the show in a sort of War of the Worlds manner as well.

Barney Ashton Bullock – he’s an old friend of Chris’, he has a good voice. We both have diverse influences and we wanted to show those influences when we put this all together.

The set also has a DVD of the show as well?

Yes, but it’s not an ‘all singing, all dancing’ type DVD, it does show what we are about on stage with the other musicians, Andy Hodge on bass and Dave Colquhoun on guitar, and we had a great guest in David Longdon from Big Big Train on vocals. Dave Colquhoun has played with Rick Wakeman a lot so there is a whole load of prog meets pop going on.

Let me ask you about Asia?

Yes, we’ve just finished a tour called the ‘Royal Affair’ which was a really interesting one, Yes were headlining and also Carl Palmer’s ELP Legacy were on the bill as well, so we thought with Steve [Howe] there as well it would be good to do a few Asia songs too, so we got Ron [‘Bumblefoot’ Thal] to sing and Billy [Sherwood] played bass. It was good to see where Asia fitted into all that prog hierarchy if you like.

Asia were of course huge in the early ’80s.

Yes, but I’m not sure if you’d call it Prog even though all the members had strong Prog credentials. I think they all wanted something different as they’d done all the big stuff in the 1970s. Yes was in transition, it gave the chance to try something new. We rehearsed for 6 months before we went into the studio, for me the big thing was getting the writing partnership with John [Wetton]. In the early period we only did two shows in the UK (at Wembley Arena), when we got back together in 2006 we certainly did more.

I never actually got to see Asia; I’d love to see you come around again.

Well you never know, obviously John is sadly no longer with us, but we could possibly do something further in the future.

Obviously Yes have announced dates for next year, now playing Relayer in full.

Yes, until when Chris [Squire] died about four years ago we’d done a lot of time playing the albums, we did the whole of The Yes Album, Close to the Edge, Drama, two sides of Topographic Oceans, but not the ‘Holy Grail’ of Yes albums, Relayer. Although we often talked about doing it we never had, whilst we did Gates of Delirium over the summer, we never did Relayer in full, it’s something that I feel the fans would like us to do.

I’m looking forward to it as it means I can probably get a Relayer t-shirt finally, although this doing the whole album idea is one that lots of bands follow now.

Yes, it’s certainly not a new idea but when people bought those albums they bought on vinyl or cassettes that was a ritual they followed. Vinyl was certainly the source of Progressive music, as Chris Squire used to tell me, the relationship between each track was important, the keys, the tempos, very much an approach like classical music. If you look at a symphony you don’t start at the third movement then suddenly bounce back to the first, it’s very much a method of making music that you have the high’s, the lows. You have a specific order, the motifs that come back, maybe in a different key or tempo, but you still have the familiarity of the relationship of the movements between each other. It’s very important in music. So, I think Yes really applied that to their albums.

So is there new Yes music on the horizon?

Yes, when we get going in the New Year, once we’ve completed the early European dates, then I think we’ll start on something, we’ve been swapping ideas already. The beauty of Yes is that it’s always continued to develop, the last album came out in 2014 and new music keeps us fresh and interested.

Will there be a new DBA album too?

Yes, although we mainly work remotely as Chris is in LA and I’m in sunny Wales, but we will be working on ideas and putting something new together before too long I hope.

Well Geoff, my time has gone so I’d best let you go, but it’s been a pleasure to talk to you. Good luck with everything and thank you for talking with me.

My pleasure, thanks, you too, good luck to you too.