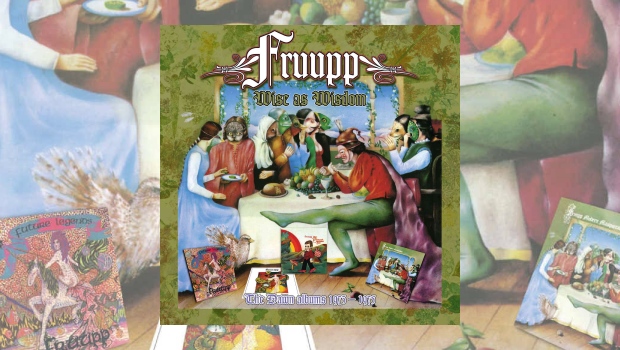 Sometime in 2011, just before each of Fruupp’s albums reached their respective 40th birthdays, I happened upon two interesting looking CDs in an independent music shop in Leeds. They were the middle two albums from Fruupp’s sadly short-lived career, Seven Secrets and The Prince of Heaven’s Eyes. The artwork was suitably ‘prog’ and the Esoteric label was (back then) a seal of quality, but I was cautious: the only Fruupp track I’d heard until that point was the one-minute ‘joke track’ The Seventh Secret, sandwiched between the vastly more impressive Gryphon’s Opening Move and Supertramp’s School on the four-disc Wondrous Stories: A Complete Introduction to Progressive Rock compilation. It was hardly the type of thing to get me interested in the band, but I thought I’d go ahead and pick up the two albums anyway to give them a second chance.

I could not have been more stunned when I started playing Faced with Shekinah – the first track from Seven Secrets – and was consequently barraged by an artful blend of musical ideas, ranging from classical to folk to hard rock all in the first few minutes. By the time the song’s finale kicked in, an exquisite rock revisioning of Purcell’s Rondeau, I knew I was smitten with the group. The rest of the album is quite laid-back by comparison to the first song – a situation not dissimilar to In the Court of the Crimson King – but still portrays the band’s masterful ability with melody, technicality and genre-blending.

By comparison, the portrait of Mud, the central character of the band’s third album, seemed rather simplistic in comparison to the complex dot painting on the cover of Seven Secrets, and while the music within wasn’t simpler, it certainly was a shift in style. The Prince of Heaven’s Eyes, whilst not having the most coherent story, is still no less of a concept album than any you could name. Beginning with the utterly delightful It’s All Up Now, Fruupp pour their heritage into this fine tale that plays like a children’s storybook. While Jaunting Car and Seaward Sunset may not have aged as well as the rest of the album, the other tracks proved Prince to be a fine concept album indeed. Little details like the theme linking Annie Austere, the last track of Side 1, and Knowing You, the first track of Side 2, made the album that much more magical.

By the final track, it was clear the band needed a big finale; it was simply too good of an album to leave on a duff note. When the theme from It’s All Up Now was reprised, I started cheering; here was a band that knew what they were doing. And then I was rather astonished: the grand finale seemed to be playing, with cinematic chords, squealing guitar solos and big drum fills, but something wasn’t right. The volume and timbre of the guitar solo just didn’t seem to match the emotional tone of the music, instead, seeming overpowered and drowned out by the rest of the band. Through many listens, I’ve managed to condition myself to hear that finale the way I believe it was meant to be heard, but if I was to wish upon a rainbow, I’d wish that someone could remix this section to make that guitar more prominent.

It wasn’t long before the other two albums made their way into my collection. The optimistically titled Future Legends bears the most breathtaking artwork of the set, painted by bassist Peter Farrelly. Some fans would say the music inside is also the most breathtaking of the set. Like Seven Secrets there are six ‘full’ songs bookended by a pair of linked shorter pieces, both titled Future Legends. Unlike Seven Secrets, however, all of these are full-on rockers, with hardly any respite to be found, and that’s not a bad thing. The production may be a little more basic than the subsequent albums, but the genius of this album especially shines through from the proggiest moments of Decision, to the rock ‘n’ roll solo in Lord of the Incubus to the anthemic rock of the album’s almost-closer Song for a Thought. Bizarrely, however, the greatest moments of the album come from the bonus track On a Clear Day which was only featured on the first 100 presses of the album. The track was taken off the album as it featured (some particularly brilliant) excerpts of Holst’s Jupiter, from The Planet Suite, which his granddaughter wouldn’t permit the band to perform without an orchestra. This turned out to be a blessing in disguise as fans can now hear that track alongside Graveyard Epistle, another solid Fruupp track, which might never have been recorded if not for the drama with On a Clear Day.

Modern Masquerades – mistitled as “Modern Masterpieces” on the spine of the 2009 Esoteric CD – would showcase the only line-up change in the band’s history, when keyboardist Stephen Houston was replaced by John Mason. The change was profound but any doubts that Fruupp got any less progressive were immediately put to rest when the album featuring five songs that were seven minutes or longer was heard by all. Classical references were resigned to history in this more sleek, streamlined version of Fruupp. Perhaps the most shocking number was Mason’s sole contribution Gormenghast, a mixture of lounge music and symphonic rock with a prog instrumental in the centre for good measure. Truly the art of genre-blending had reached a few milestones with this band. Elsewhere, Masquerading with Dawn and Sheba’s Song made for more cohesive symphonic prog numbers, whilst Mystery Might showcased the band letting loose and doing a semi-improvised jam in the second half. The shorter songs Why and Janet Planet might have been throwaway tracks, but at least they were short and hardly made a dent in this otherwise thoroughly consistent album.

Unfortunately, the rise of punk rock was putting quite a hole in the sales of Fruupp albums and that, coupled with the loss of the tapes of a planned live album in a fire, caused the band to fold prematurely, although not without leaving a fantastic legacy. The band have been remembered as one of the most inventive progressive groups of the 1970s and still have a loyal following which I’d include myself in. The 2009 Esoteric editions are a fantastic way to enjoy these albums with full artwork restoration, extensive liner notes by band manager Paul Charles and even the original Mud Flanigan book that accompanied The Prince of Heaven’s Eyes.

But this isn’t a review of the 2009 editions. Ten years later Esoteric has decided in all its wisdom to collect the four albums in a clamshell boxset at the ‘bargain’ price of £21.99. One might think that the knowledgeable folk at Esoteric would take great care to preserve these albums and work out how to still give listeners a great insight. Instead, we get one of the most barebones collections Esoteric has ever thrown together. The site claims that albums come in replica sleeves and yet only Future Legends is given the full gatefold; you won’t see the beautiful image of the Irish lake which adorned the inner gatefold of The Prince of Heaven’s Eyes here. Nor will you get to read Mud Flanigan’s book, or indeed anything about the band, as the extensive sleeve notes, photographs and clippings from the 2009 booklets are completely gone; instead we get a rather feeble poster with three familiar images of the band and some production credits. Even the Anthony Phillips Private Parts & Pieces V-VIII and Hawkwind The Flicknife Years (1981 – 1988) boxsets got a full booklet!

Maybe I should be counting my blessings; at least this isn’t an ‘Anthology’ set like Quintessence where the artwork has been chopped and changed and the albums are all on separate CDs. But at least Quintessence got a nice essay, albeit by hyperbole specialist Malcolm Dome. And you know what? I’d actually love to see Dome take a crack at Fruupp; to see someone whose words give me no end of pleasure writing about a band I hold dear to my heart.

The grievances don’t stop there. Upon listening to the CDs side by side, they sounded absolutely identical; any hope I had of hearing a beefed-up guitar solo in The Perfect Wish or a less muddy version of Decision was dashed. In fact, it seems as if nothing has been done to the 2009 track listing whatsoever, no extra bonus tracks, nothing. This, of course, means that the mistake with the track times on The Prince of Heaven’s Eyes has not been rectified. Not sure what I’m talking about? Let me explain. On side 2 of the band’s third album, the first two tracks Knowing You and Crystal Brook are linked musically but are separate tracks. The phrase ‘crystal brook’ is mentioned in its respective song, and yet Esoteric erroneously placed these two tracks together on the CD under the name Knowing You. The original short piece Seaward Sunset then became the new Crystal Brook. What adds to the confusion is that the final track The Perfect Wish is split into two halves with a moment of silence between them, which of course respectively became Seaward Sunset and The Perfect Wish on the Esoteric version. Allow me to demonstrate the track times below. On almost every other CD version of this album, the track times for the second half are approximately:

However on Esoteric’s version they become:

If I’d had been reviewing the 2009 editions, I wouldn’t have been so hard on Esoteric, as the fact that there are four moments of silence between four tracks could make things confusing. But I’m appalled at how Esoteric haven’t even bothered to correct this mistake in ten years, which just goes to show what a slapdash effort this box set has been.

Sony’s Original Album Classics collections which tend to house five albums at a time often retail between £5 and £10, occasionally costing a little more. When you’re paying £22 for just four albums, you expect a higher quality package and that’s simply not what you get here. Moreover, Fruupp is a band that deserves the highest quality repackaging, and not some hastily assembled mess thrown together to make a quick buck. If you’re a collector, I suggest investing in the 2009 collection, which gives you all you need and more to best enjoy Fruupp’s outstanding canon. If you only care about the music, I’m sure there are a plethora of ways to get these albums into your collection for less money. It’s difficult to imagine who would be truly satisfied by this box, as there’s simply too much compromise being sold at too high of a price. The music, however, is, of course, transcendental and will surely always remain that way. 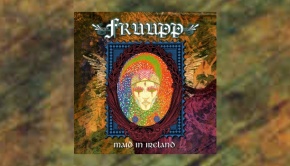