The launch of a new IQ studio album is a special event – they only happen about every 4 or 5 years, so it’s understandable that there was a definite air of anticipation and expectation in a packed Islington Assembly Hall. What would the new material present to their faithful fans, and what would they pull from their extensive back catalogue to go with the new songs?

IQ are welcomed like returning heroes as they take to the stage, commencing with the short and atmospheric Eastern-tinged Alampandria from Resistance which segues smoothly into the stirring From the Outside In from The Road of Bones. Uncharacteristically, what is not so smooth is that in the early stages the sound balance did not feel quite right for a number in the crowd, with calls to turn down a rather dominant bass. Others later remarked on the wonderful sound in the gig, that’s the nature of live shows sometimes – the sound can be perfect for some but not so for others. From the point of view of this listener, the early bass-heavy issues seemed to settle down quite soon… but it proves even the mighty IQ are human! With such a canon of songs, IQ have a wealth of older numbers upon which to draw and it was delightful for them to awaken the marvellous Sleepless Incidental, one of the lesser-played songs from the sublime Subterranea. The surprises continue as Peter Nicholls uses his characteristic droll humour to introduce the rarely played but magnificent Sacred Sound as “featuring Professor Neil Durant’s impressively large organ”. Indeed it does, and it sounds outstanding, its apocalyptic images as Nicholls sings about the “last remaining days” also seems to fit the feel of the later Resistance songs which pepper the set. 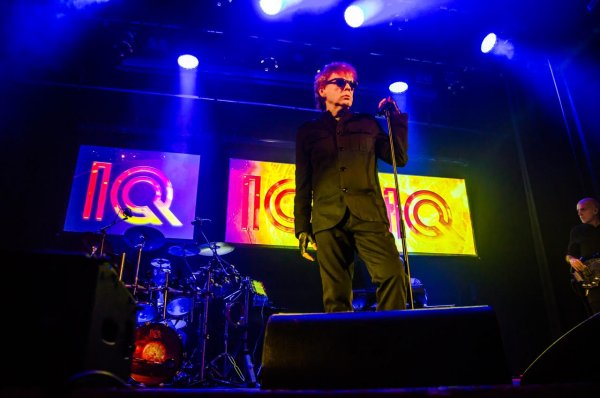 Michael Holmes’ impressive and emotional guitar playing is the main feature in new song Shallow Bay which follows, easily the most straightforward piece featured from the new album. The wise pattern of interspersing the old with the new continues as Nicholls humorously attempts to introduce Stay Down in a variety of regional accents, eventually settling on the London tones of ‘Stay Dahn’! The jokes are confined to the introductions as the song is far from a bundle of laughs, commencing with a simple piano under Nicholls’ sorrowful voice. Pizzicato cello keyboard sounds develop the song, building the tension, overlaid with the sound of ticking clocks. Then the Assembly Hall is hit with a massive landslide of keyboards and guitars, powered by enormous bass and drums as Nicholls screams against a breakdown. It’s very strong stuff musically, lyrically and emotionally. It also reassures the Islington crowd that the new material is indeed up to the usual IQ standards.

The highlight of the new material debuted is the eerie, disturbing epic For Another Lifetime which comes in with weird Carnival noises, sounding like some sort of ghost story, building in intensity in classic IQ ensemble style. The Assembly Hall then echoes with loud rumbles of thunder as the song dramatically breaks with a massive wave of sound like a storm breaking. It’s truly breathtaking stuff in a live context and IQ take flight as guitars and keyboards weave in perfect unison, Tim Esau and Paul Cook driving this leviathan of a song onwards relentlessly. Yet again Nicholls stands transfixed front and centre, seemingly screaming desperately and forlornly into a hurricane of sound. One has to wonder what goes through his mind and soul as he writes and sings this material? The response is rapturous as the crowd then know that IQ are definitely back as great as ever with an instant classic IQ epic. 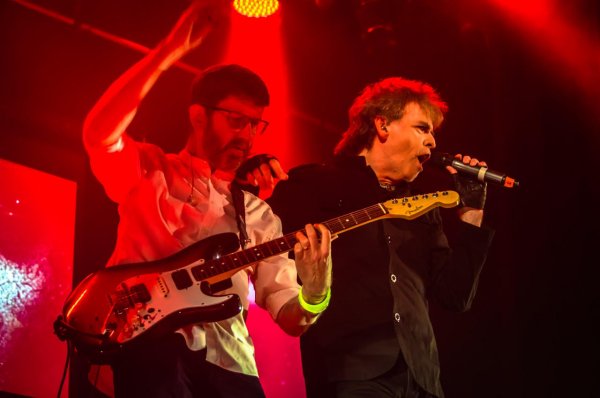 In the context of such intensity, it’s strange to report that a song about a serial killer, The Road of Bones, with its quietly ominous opening, is virtually light relief. However, this is IQ and we’re never far away from a transition as Esau’s bass comes in and the song gradually builds to a truly dark and sinister conclusion, Nicholls donning white gloves and strangling himself. As ever, it’s simple but impactful theatre.

In contrast, the rather less subtle A Missile from Resistance almost immediately descends with a drone and plummeting electronic pulse into a thunderous maelstrom of drums, bass and keyboards. It sounds bloody ENORMOUS and blows the crowd away, Nicholls roaring powerfully, riding that metaphorical Missile with great vocal skill and stage presence in front of projected, weirdly comical, cartoon dancing skeleton figures. It’s bizarre but hypnotic.

The atmosphere changes significantly for another fine song from The Road of Bones. When I last saw IQ launch an album at this venue in 2014, I had very recently suffered the loss of my Father. That night they played Until the End and the concluding verse reduced me to tears as I associated it with sitting at my Father’s bedside on his last night:

“Will You Stay until the End? When I’m down upon my knees, will you defend me then?
And wreathe my form deep in your velvet arms one last time, Before my Heart sets you free.”

Once again this song reduces me to tears and surrounded by hundreds of people I am transported back to that room overseeing my Dad’s last hours. The song is actually about the end of a relationship, as the beautiful projected images indicate, but that’s the beauty of music and the power of Nicholls’ poetic words – we can all interpret them as we feel, projecting ourselves into the songs with our own feelings and memories. In my view, that’s partly what makes IQ a truly special band. 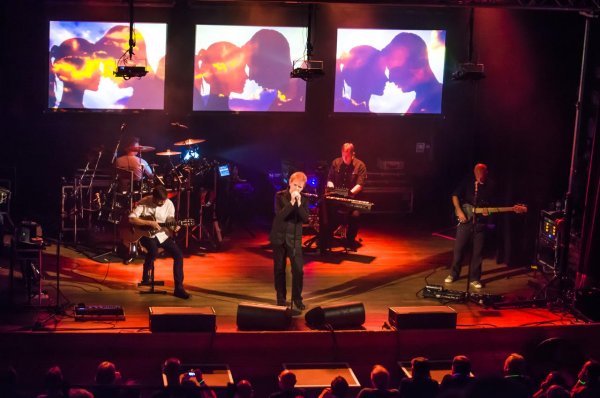 The gig reaches a wonderful climax with the finale of Further Away from one of their best albums, Ever. The band only really debuted it live last year, 25 years after it was written, when playing the whole of the Ever album. It has fittingly remained as a jewel in their set, closing the show with its beautiful arrangement and stellar performance. After the density and darker shades of much of tonight’s material, it is a great and emotionally uplifting musical experience to conclude with this shimmering and gloriously triumphant song. Needless to say, the place went bonkers!

The encore featured a joyous clap-along version of Subterranea (and a brief vocal cameo from Michael Holmes… erm… stick to the guitars Mike!). The place is rocking as they return for one final song and the unmistakable undulating keyboard melody of Awake and Nervous from their first ever album, Tales from the Lush Attic in 1983, ripples around the hall. The older fans are in raptures and somehow they manage to turn it into some sort of Gothic sing-along! It’s a great way to finish the set, going right back to their beginnings, underlining their sustained quality for over three decades.

IQ remain one of the truly great Progressive rock bands of the last 35+ years, and with shows and new albums as good as we witnessed in Islington there’s no sign that they are declining or going anywhere soon. If you weren’t a fan at the beginning of the gig it’s almost certain you would have definitely joined the ‘IQ Resistance’ by the end.

SETLIST
Alampandria
From the Outside In
Sleepless Incidental
Sacred Sound
Shallow Bay
Stay Down
Ryker Skies
For Another Lifetime
The Road of Bones
A Missile
Until the End
Further Away
~ Encore:
Subterranea
Awake and Nervous