There are some albums that just surprise you, coming right out of left-field and socking you right between the eyes – that’s what Black Bead Eye from How Far to Hitchin has done to me. To be honest, until recently I had not really heard of How Far to Hitchin. It turns out that the ‘band’ is artist Paul Dews, who took on a project name in the same way Peter Jones is ‘Tiger Moth Tales’ and Robin Armstrong is ‘Cosmograf’. Even Porcupine Tree started out as just Steven Wilson alone in his bedroom.

So how come this album has had such an effect on this listener?

Well, to sum it up, Black Bead Eye is a glorious explosion of quirky ideas and unconventional musical flights of fancy which is unpredictable and strangely fascinating. The album immediately grabs you by the ‘proverbials’ as Queen of Malice opens, initially with the sound of a needle on a vinyl record and then expanding into a sort of orchestral Hammer Horror film theme before an eccentrically undulating synth line slides in… and with a countdown we are suddenly plunged into a pulsing, crazily percussive and off-kilter spiral towards an insane world. It’s quite bizarre and rather breathtaking, with echoes of the early ’80s incarnation of King Crimson. Paul Dews vocalises, in fine Brian Eno style, over a wailing guitar, intoning about tribalism, twisted ideologies and how the population is being manipulated.  It’s not too hard to work out which politicians Dews is aiming lines such as these:

“Queen of Malice, King of Hate, Stuff your Faces, Lick your Plate
Parasite, you Suck and Gloat, You Drain my Will to Stay Afloat
You Captains of this Sinking Ship, You Bring out the Hatred in Me…”

This is a powerful and biting song which plunges the listener into a maelstrom and one cannot help thinking:

‘We’re not in Kansas anymore, Toto… and I’m not even sure we’re in bloody Hitchin… wherever that is!’ (it’s actually near Luton, England).

Whilst we’re on the subject – where did Paul Dews get that peculiar name for his project?

He has helpfully shared the following explanation – he does actually come from Hitchin, but the name is mainly inspired by a rather surreal children’s T.V. programme called ‘Gilbert’s Fridge’ which Dews used to watch as a student. The show had a recurring sketch each week called How Far to Hitchin about two British Army P.O.W’s trying to escape back to Hitchin. Paul Dews describes many of his songs as being inspired by his love of nature, science, family, childhood memories and the passing of time. He explores these themes in an effort to somehow get back to those feelings, that yearning for lost innocence, and to try to understand how those experiences have shaped his life. In a sense he is also continually trying to get back to Hitchin.

Alongside Paul’s unique musical vision for Black Bead Eye, he has also produced absolutely stunning artwork for the cover and booklet on high quality card – this is clearly a labour of great love, such is the care, imagination and skill that has gone into the excellent presentation.  It really is outstanding and may be one of the most beautiful cover designs this reviewer has ever seen – it’s gorgeous and intriguing as the pictures portray some of the characters and situations in the songs. There is one reservation to share – the lyrics are printed in white type on a grey background, which looks lovely… but I literally needed a magnifying glass to read them, and this is not something with which I usually struggle. However, this is a minor quibble, such is the quality of the artwork, and the clarity of Dews’ singing means that lyrics aren’t essential.

Two songs which clearly reflect a state of mind are Compression and Desensitised, which follow the opening mania of Queen of Malice in a much less intense manner. Commencing with a bleeping signal, Desensitised settles into a very simple piano and keyboard melody, over which Paul’s soft voice (reminiscent of Paul Buchanan of The Blue Nile) lays out the sense of powerlessness many feel about the constant wave of bad news and negativity which the media pour over us every day:

Dews wisely holds back on this piece, only adding a deft bass and mournful electric guitar keening in the distance, but with this control there is an added impact as the song is drenched in melancholy and dripping with desperation. Later in the album Compression commences in a similarly restrained manner, reflecting the drudgery of working life and becoming trapped in our lifestyles, but the refrain seems to burst out forcefully in desperation – the whole song gives a palpable sense of being compressed by life’s pressures.

The main highlight of the album for this reviewer is the remarkable Instant Gratification which delves into the turbulent waters of social media, and our love/hate relationship with it. It is definitely the WEIRDEST and most memorable song I have heard this year. Over a distorted bass and percussive intro a robotic voice drones:

The song twitches and throbs as if it is having a seizure, but the strangely hypnotic bassline and spasmodic keyboards make this such a different and unique song which worms deep into your brain. It is a little haunted by the ghosts of Talking Heads… and at its most quirky even the spoof songs of ‘Adam and Joe’, and neither of those are bad things. The song is brilliantly observed and executed, but it does perhaps outstay its welcome with an extended, droning outro… or ironically it may be that I just have a short attention sp… oh look, a squirrel!

The multi-faceted extended piece Woman Screaming at Trees commences with an eccentric monologue before a piano comes in sonorously. Inspired by a weird image that flashed on Dews’ PC, spotted by his partner who thought it was a picture of a woman screaming, the idea was generated for this peculiar song as Dews tried to imagine why a woman might be screaming at trees. Dews has shared that it is about the consequences of our actions and denial about physics and the scientific nature of our Universe. A cello-like accompaniment joins the simple piano line, but this is a showcase for Dews’ softly beguiling voice, full of sorrow. The song increases in tempo and instrumentation, and for me loses some of its appeal – sometimes less is more, but it is still an effective piece.

One has to smile and warm to the artist when he adds a little aside at the end of this song halfway through the album, as his partner calls to him: ‘Are you going to put the other side on? Do you want a cup of tea?’ – how very British, and tells us that even when Dews is being serious and intense in his work there’s still a glint in his eye, and he’s not taking himself too seriously.

The Crow, written the day after Trump was elected President, incongruously commences with a delightful acoustic guitar and a subtle synth, but the pastoral feel soon gives way to sombre, dark intonations.  Imagining how the arrogance of humanity is perceived by ‘The Crow’, the song takes an unpredictable left-turn as an intermittently pulsing synth introduces an eccentrically off-kilter keyboard and the power multiplies like some sort of tumorous growth, and then a killer bassline propels the piece into further insanity. This is fascinating, unpredictable and unconventional music which cleverly suggests so much imagery with its use of unusual instrumentation, effects, melodies and rhythms. We left Kansas ages ago remember!

The wonderfully named Bumsurfing describes an unusual beachside game that Paul used to play in Goa, fuelled with some Kingfisher beers! It’s bonafide, psychedelic pop nonsense celebrating the pure joy of being silly, in precisely the same eccentric vein as Syd Barrett-era Floyd or XTC. It’s hard not to smile at lines like:

“Let’s roll bare arsed in the nettles, in homage to common sense.”

Paul Dews’ personal recollections continue for the final song, Giraffe, which is altogether more melancholy, based on intensely felt memories about his mother moving into a nursing home around the same time as his brother-in-law Rik tragically died of brain cancer. The album is dedicated to Rik Hammond, and according to Paul, Rik was a talented and prolific artist. Early in his career he produced abstract paintings and drawings of Giraffes, and often used to say “Make the work, just make the fucking work!” – words that are echoed in the lyric. The ‘Daffodils‘ image evokes memories of flowers in Dews’ mother’s room at the nursing home in this elegiac and tastefully restrained piece. Images of Red Kites are a reference to the birds that are apparently commonly seen soaring over Hitchin… there it is again – it all came back to Hitchin in the end! Indeed, as Dews says:

“Hitchin has become a state of mind for me rather than just a geographical place.” 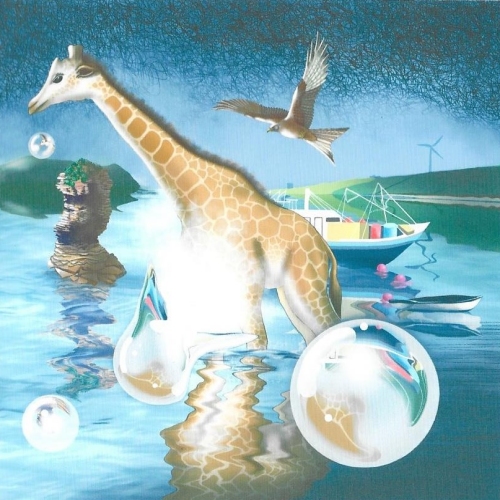 How Far to Hitchin have produced a remarkable album filled with a bewildering and fascinating whirlpool of different sounds and styles, skilfully threaded together to imaginatively express the artist’s memories and feelings so powerfully and vividly. If you’re looking for something out of the ordinary, unique and yet still accessible and weirdly melodic, then it may be worth exploring  Black Bead Eye, one of the most unusual albums of 2019.