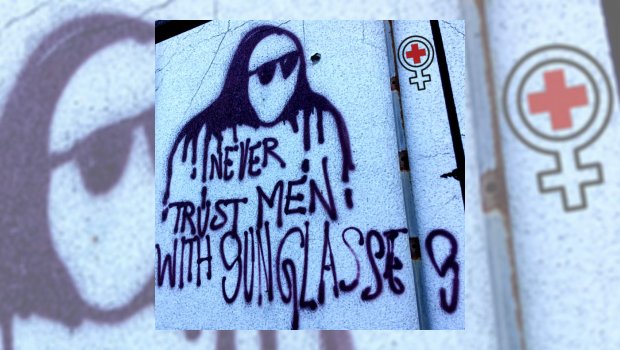 International viewers start your research now then imagine the late John Peel delivering in his usual laconic style “…that was Donut Membrane with Spunky Side Dish, but now something new, prescribing some sage advice…” That would be Dr. Woman and the enlightened wisdom is Never Trust Men With Sunglasses.

Further investigation tells us that this is a digital album by Seattle based musician Daniel Keating whose alter ego has now produced three albums. This third outing is overtly synth pop with hints of Depeche Mode with a driving bass guitar line throughout which has shades of early Simple Minds with maybe a sprinkling of A-ha. Having said that, Daniel’s vocal delivery is best described as a baritone that fits this music like the missing tiny screw in your darkened spectacles.

Other aspects are 50 bees in a paper bag synth drones and what appears to be a drum machine backing, although track three Failure adds a suspicion that there might just be a person in that Robot suit, although he still can’t reach the cymbals because there aren’t any, only a ‘ticker ticker ticker’ type hi-hat.

Talking of the “drumming”, a less busy kick would take this album into the New Romantic dance section, albeit if the club was one of those where you can’t see the drink in front of you, and records by The Human League and Berlin-era Bowie were blasted through early WEM speakers.

Despite the jocular impression there is little humour, with all the enthusiasm of a Goth at a swimming gala, but if that expression made you smile then we’re getting to understand things a little better now as this is actually quite a fun place to be none the less.

Short and sweet opener Level 1 sets the scene with the ghosts of Seattle’s once grunge dominance clearly showing as the crunchy guitars emphasise the chorus, whilst Make Believe is the quirky light before the aforementioned downer of Failure.

Crystalline Blue, one of two instrumentals, is a slow ramble through the ship’s forest domes and it’s rather lovely, Not The Girl and Guard have a certain Norwegian trio’s stamp with an unequivocal Mr. T. Dolby at the controls, whilst second instrumental Standing In The Middle Of The Street is, in all honesty, the sound of someone standing in the middle of a street.

However, the last three tracks – especially Midnight – could be lost Bowie finds recorded during his sanctuary period in Germany’s capital city with the Pop synth feel gently morphing into the more grown up avant garde shapes that the good lady doctor clearly aspires to.

The influences are obvious but here they are are used as homages rather than attempts at copying, and since this type of music has clearly survived in people’s hearts since the humble oscillator was first used to make rhythmic noises, so Dr Woman will as well. Low-fi production with Hi-five aspirations sum up this music which should be filed under Brand New Nostalgia…

MUSICIANS
All writing and playing by Daniel Keating