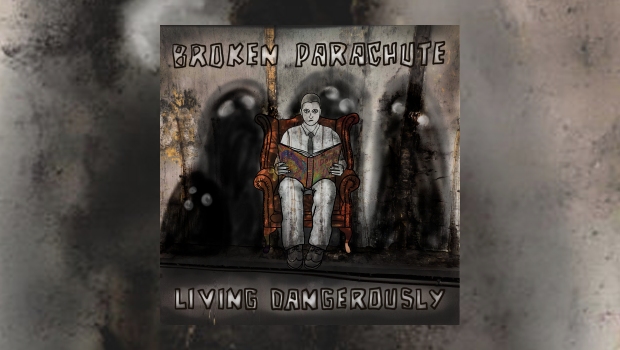 When you are presented with an album that completely and without shame reveres the late ’60s and early ’70s, sits on grannies pouffe in the corner of the room, provides you with numerous audio worm infections and makes you grin quite a lot, what are you to do for a review? Progressive? How can nostalgia be progressive? Well, let us begin…

Broken Parachute are Ben Bell (Gandalf’s Fist, Patchwork Cacophony, U.K. resident) and Marcus (Kashgar, Crosswinds, Canadian resident), and this is hugely entertaining. It doesn’t stay with those boundaries of, say, ’67 through to ’74; there are hints of the ’80s (the decade that music mostly forgot), ’90s indy nirvana, and some other seasonings. It opens with Surprises, a brief musical introduction with Ben’s vocal, reprising at the other “side” of the album with This Track is a Figment, reminding me of Caravan and Camel, with Van der Graaf, cheesy The Nice, ELP, early Deep Purple, the multi-tracking to get the choir. Madness, deranged and fun.

Lines is psychedelic prog, early drug-fuelled Pink Floyd. I don’t think either of these two are old enough, bringing a whole meaning to the phrase “if you remember the ’60s, you weren’t there, Man!” It has a touch of the ‘Marmite’ Peter Hammill about it at times (I both love Peter Hammill, and at times think WTF is going on, but it does make you listen). Lines‘ 6 minutes drift almost imperceptibly into Masterframe, a track with a feel of a seventies computer room with modern lyric reference points. Some Hendrix/Clapton guitar work here, Emerson organ. Had you heard it in 1972 in your kaftan, you’d be going “WoW!” It’s like a listening session with Dylan the rabbit from The Magic Roundabout. Great!

Limits, and Ben’s voice gets a little husky, at times a roar, but lending itself to the material, with that Hammill quality again, sung from the heart, it carries on into Devils. Van der Graaf territory again, with lots of Deep Purple and hints of Yes in bold stylings, if not vocal delivery. As said, it’s not entirely anchored in 1973, there are some passages with a little Porcupine Tree/The Pineapple Thief. I do hope Ben’s gargling with honey; the raw edge makes my throat sore! Marcus, lest he be forgotten, provides some stunning guitar solos throughout all the tracks, whilst the drums are provided by James Chapman.

It has been six years since their first album, Down is the New Up, which I have not heard, but this one is a very accomplished album that comfortably welcomes repeated listens, even if to think you may have heard something like it before in the windmills of your mind, (you haven’t, but it does have sustainable energy).

Ghost, Tempest and Living Dangerously all sit in audible comfort. If you like Ben’s iterations with Gandalf’s Fist, this has the quality but not the insanity (I mean that in a nice way!). Here are three tracks where Mr Bell has some adventures in Sololand. Living Dangerously is the closest by far to Gandalf’s Fist, but is very much of this album. That is not to deny Marcus his presence, even though the keys, I think, dominate these tracks, the guitar and bass work are structurally important.

Light is another track just to lie back and let it wash over you, it really is a work of art at times, still not really getting the Yes referencing, but suitably chilled… ah, here it comes, Yes at last; Bad Politics, how poignant given the chaos of our current situation. Purple Yes! Guitars owing more to the bluesiest Purple patch rather than Yes-like statements, keyboards more Jon Lord than Rick Wakeman, but a lot of Yes appears in the jazz segments.

My fellow reviewer Phil Lively will like this Fire! I think more VdGG than DP, with hints of Crimson. I try to listen to as much brand-new shiny prog as possible that doesn’t sound like it has been ripped from the days of my youth, though more towards my peers two or three years older, than my aged 10-ness, but this is so well made, I do not feel lost in the past, and along with Rosalie Cunningham it’s is refreshing take on what was, but with feet firmly planted in the present.

You want to have some fun, then buy this, at worst you will feel like you’re in a time warp and discovering something you missed, at best you will think, ‘Wow!’. Don’t leave it another six years before album three.

“it’s just a figment of imagination, and you can’t guess what’s coming next…”