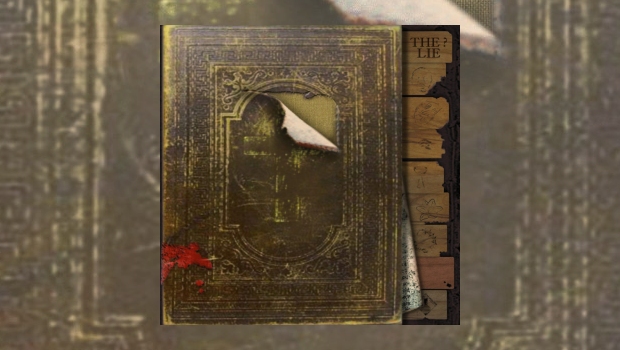 There is an episode in The?Lie which contains one of the most emotionally punishing songs I think I have ever experienced. Certainly, on hearing it for the first time, the sheer force of its brutality stopped me dead in my tracks. A Dream That Strayed II is a clinical dissection of the ferocious power and torment which fanatical adherence to some forms of religious psychology have in the context of our personal relationships.

Samuel (played with deft sensitivity by Lars Köhler), torn between an indoctrinated sense of duty to the Word by virtue of his overbearing Father (played with fearsome menace by Peter Jones) and his love for Evangeline (the superb Anne Trautmann), pregnant with their child, acquiesces to his Father’s demand for the relationship to end. The three-minute song between Samuel and Evangeline is heartbreaking in the way it shines an unforgiving light on the logic at work in the unfolding conversation.

Samuel is full of self-recrimination for having given in to the ‘sins of the flesh’. Evangeline is perplexed, exasperated that he would allow doctrine and familial loyalty to destroy their future together. He feels her pain (which mirrors his own) but insists the relationship must end: “HE has a plan” he piteously laments in ambiguous reference to God as well as his Father. In abject abandonment, she screams at him “WE had a plan” before he turns and walks away, coldly muttering “you’ll love again”.

But if the second instalment of this planned three-part rock opera takes us to the very depths of human experience, in Hear My Voice Tonight it also takes us to some absorbing musical highs. Immediately following a major plot twist, three key characters come together in a series of melodic combinations that are both delightful and mesmerising.

Across the best part of ten minutes, Samuel, Mother (Jana-Christina Pöche) and Noah (Sören Flechsig) conduct an inspired series of intensely emotional interactions, oscillating from solo voice to duet vocals, to three-layered conversations, fluid in the way they constantly shift and sparkle with creativity and insight. Yet even as you are being seduced, keep your wits about you: letting your guard down is the prelude to the delivery of yet another significant plot development!

I think what makes such impressive diversity possible is the combination of three things. The first is the undoubted genius of George Andrade’s compelling writing, his often disturbing lyrics and the insightful grasp of the way musical theatre can illuminate the complexity of human relationships. Building on Thoralf Koss’ story, Andrade’s almost forensic insight into the tortured machinations of religious thought and faith create contexts and situations full of drama, power and poignancy.

The second element is the strength brought to the story as well as the music by the impressive contributions from a number of outstanding musicians. Peter Jones (Camel, Tiger Moth Tales) is inspired as the driven and ruthless Father. Luke Machin’s guitar arrangements bring Andrade’s lyrical moods and plot suspenses to life, giving crunching menace and heft on the one hand and nuanced gentleness and lift on the other. Steve Unruh (Samurai of Prog, Damanek, The Tangent) brings extra texture and additional focus in violin playing which perfectly accompanies the momentum and thrill of the music.

Last, and certainly not least, there is the continuing revelation of the evolving scale of musical innovation which Seven Steps to the Green Door manage to create with each release. This is a band who, ever since their debut album The Puzzle in 2006, always thrill with the rigorous combination of their instrumental virtuosity and dynamic musical creativity. Each release demonstrates a rich and imaginative progression in exploring the variety of directions in which their ‘signature sound’ can take them.

The diversity characteristic of their catalogue to date is beautifully enshrined in this new album and pushes the boundaries of the SSTTGD project further. A Dream That Strayed I is a welcome change of pace, a languid, bluesy guitar carried by bubbling bass. A Price to Pray II is a punishing experience; severe, dark, growly under vocal with exasperated top vocal breaking into the soundscape, contrasted with a nerve-fraying, frantic violin and shifting crunching guitar chords moving in asymmetrical rhythms.

In striking contrast Heaven is a short but enchanting choral and operatic piece, a growling organ base supplemented by gentle solo vocal overlays and solid guitar chord support. Or again, The Word Made Flesh has an alluring female vocal opening which then broadens into an almost ‘classic’ Step In 2 My World (2008) vibe – jaunty, happy, exuding fond memories which then turns in on itself and is consumed by an ending which callously sweeps away all musical beauty.

The?Lie is an arresting piece of musical theatre; it is magnificent in the breadth of its vision, enticing in its range of musical invention and irresistible in its dramatic force and potency.