Raffaella Berry of Progarchives first introduced me to The Tea Club back in 2010 with the release of their brilliant second LP, Rabbit. The last two tracks, Tumbleweeds and Astro, had immediately set up camp in my brain and made me crave more of their brand of lush and thoughtful music. I attended many of their concerts over the next 18 months, picking up their first LP, General Winter’s Secret Museum, along the way.

By mid-2011 they had started peppering their sets with new material from their upcoming album Quickly Quickly Quickly which would be released the following year. These new songs, including the 17+ minute opening track Firebears, showcased their virtuosic playing and great sense of wordplay, as well as the McGowan brothers pitch-perfect harmonies. I had found my favorite new progressive band, and they were right in my home state!

I continued to see them whenever they played and became fast friends with the band and their core group of devoted fans along the way. Between 2012 and 2014 there were critical personnel changes with three new members added. Bassist (plus violin and cellist) Jamie Wolff came onboard in 2012 with a more jazz-forward approach to playing. In 2014 the band added the young and gifted keyboardist Joe Dorsey, whose fiery synth leads would bring much added excitement to the mix. Also in 2014 drummer Dan Monda joined the ranks. His spirited and dynamic approach to the kit would fuse perfectly with the band’s increasingly challenging music.

In 2015, they unveiled Grappling whose ‘hit the ground running’ opening track The Magnet along with Genesis-fan-friendly Wasp In A Wig should have been on everyone’s Top 20 list of modern progressive songs. At this point it bears stating that The Tea Club are one of the most consistently inspiring live acts I’ve ever experienced. They render both back catalog and new material with a fiery passion and finely honed precision that draws you in deep.

Fast forward to 2019. I had been hearing that The Tea Club were working on a new release and focusing on a more vocal-forward rock format with some tracks actually clocking in under the five-minute mark. I had the privilege of auditioning some very rough cuts on drummer Dan Monda’s phone and was intrigued. I was still hearing their take on progressive music, but several of the tracks had infectiously hummable choruses and the vocals were featured in a much more commanding way. Fear not, however, for they were also putting the finishing touches on an epic piece of proggery taking 26 minutes from its first note to its final exhalation.

Needless to say, I was very excited about the prospect of witnessing this new material premiered in a live setting. That evening came on April 27th at Boot & Saddle in Philadelphia, one of my favorite music venues, an intimate space with great acoustics and large enough for a very good-sized enthusiastic crowd. 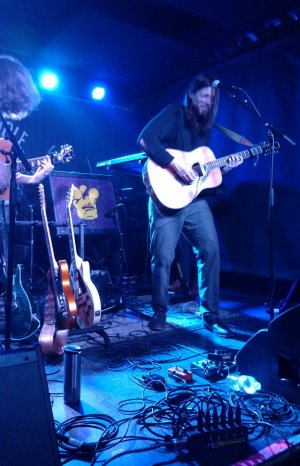 All the usual fans were in attendance as The Tea Club hit the stage. They announced that this would be a night of new music only and proceeded to break into the first track If I Mean When from which the title of the new CD If/When was culled. I could feel the inspiration of Neil Young in the vocals and acoustic guitar on both this and the second track Sinking Ship. The crisp and restrained instrumentation served the vocal melodies in a, dare I say, most radio-friendly way. Consensus was affirmed when, after the opening song, someone yelled: “First single!”. Acoustic guitars were switched for electric and the band exploded into the (prog)rocking Say Yes, a vibrant tune played out in rollicking technicolour.

The Tea Club have long been dubbed as “Pastoral Rock” which is a fitting description of the broad sweeping sonic vistas created in much of their music. Rabbit in particular brings to mind the ebbs and flows of Debussy and his orchestral masterpiece, La Mer. The next track, Riverman, perfectly illustrates this with its arpeggiated guitar and atmospheric synth washes accompanying vocal helmsman brother Patrick in a deliciously slow buildup which reads like a vintage Procol Harum tune. The Tea Club will definitely remain the poster child of this unofficial musical sub-genre (and probably its next iteration, Post-Pastoral – “Postoral”?)

With Came At A Loss, they returned, briefly, to the harmony-forward plus acoustic guitar format of the two opening tracks. This beautiful song served as a mini palate cleanser in preparation for the final track which Daniel introduced by saying (and I paraphrase): “Well, we only have one song left, but we still have 30 minutes in our set.” There was laughter both on and offstage. 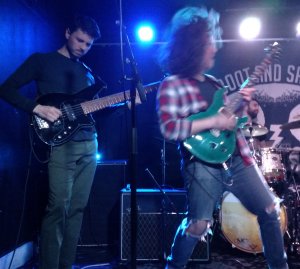 Rather than what, in the hands of a less disciplined band, could become a monolithic 26-minute pyrotechnic prog workout in the spirit of Spinal Tap, Creature serves up a glorious sonic experience broken into thoughtfully edited and concise movements. While it might seem a ridiculous thing to use the term “edited” when describing a piece of contemporary progressive music running nearly half an hour, that is exactly what we have here. A sense of the fine craft of songwriting runs through the heart of this composition which never fails to lose its focus. During the performance, I felt as though somehow the band had magically managed to break down space and time, de-sequencing strands of sonic DNA and re-ordering the Fibonacci Sequence along the way. The dragon I chase as I witness live music is the sense of being right there at the moment of creative conception, and Creature delivered this ten times over.

At the end of the show, I went over to Daniel to congratulate the band on what I felt was one of the most inspired evenings of live music I’d ever witnessed. As I approached him I realised I couldn’t even speak as I was so emotionally charged by what had just occurred. Mutual noddings of the head and a deep hug sufficed as an adequate expression of thanks.

This is a band that proves just how far, through passion and conviction, you can push your art and evolve into a form of pure and sincere communication. I look forward with great anticipation to the release of If/When (pre-ordering is available HERE) and imagine it will be on many people’s “Best Of” lists by the end of the year. 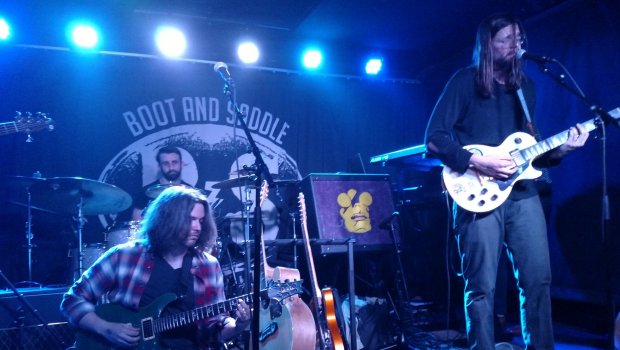