There have been huge changes for Nightwish in the 10 years since they last graced a stage in Birmingham. The Finish ‘symphonic metal’ band have moved from small venues, like the club in which they last appeared in the city, to selling out major arenas on a massive world tour. And here, in the birthplace of ‘metal’, they are fronted by the Dutch, now well established ‘Nightwish Era 3’, vocalist Floor Jansen.

‘Symphonic metal’? That’s just the tip of the iceberg! As with all great bands, such as Led Zeppelin and Jethro Tull, Nightwish have so much more in their arsenal. In Floor they have a vocalist with clout who can do justice to the early operatic numbers, yet still pack a punch for the heavier rock tracks while Yorkshireman Troy Donockley brings that authentic folk touch to the gentler songs. This is prog at its finest!

The Decades World Tour, on the back of the greatest hits package released earlier in the year, has taken in North America and Europe with just three dates in the U.K. before Nightwish return home for a couple of gigs in Finland.

Following Troy’s gentle pipe intro the fireworks began as the band launch head-first into Dark Chest of Wonders and Wish I Had An Angel from the classic 2004 album Once. Flames leap into the rafters while Floor, her commanding stage presence with hair flailing and clad in leather basque and boots, invites the audience to join in. They need little invitation, most are already lost in the moment.

“Hello Birmingham!” exclaimed Floor. “It’s been forever since Nightwish were here and the first time I’ve been here. We’re going on a trip down memory lane, are you ready?”

The response is an emphatic ‘Yes!’ The tour spans Nightwish’s history, Gethsemane and Sacrament Of Wilderness are from the band’s second album Oceanborn (1998) while Elan is from the most recent studio offering Endless Forms Most Beautiful (2015). Slipping between musical genres is effortless and they revisit the beautiful Dead Boy’s Poem which begins as a delicate creature and builds into a powerful rhythm with Jukka Nevalinen on drums and bass guitarist Marco Hietala driving the song along.

The traditional folk tune Elvanjig leads into the early Elvanpath as Floor demonstrates her operatic capability, before sharing vocal duties with Marco on the hard rock I Want My Tears Back.

Looking down, from on high, is Nightwish founder, chief musical influence and keyboard player Tuomas Holopainen. Across the stage, fellow co-founder Emppu Vuorinen’s guitar produces some great riffs and solos – nothing too flash, just understated brilliance. They must surely be thrilled by the outstanding success of their creation.

While Floor undeniably holds centre stage, the backdrop is a series of stunning video animations. I held me breath as Jukka never missed a beat whilst appearing to be on a wild roller-coaster ride for Last Ride Of The Day.

More time travel, The Carpenter and The Kinslayer, more fireworks for The Devil & The Deep Dark Ocean before coming back up to date with three movements from the epic The Greatest Show On Earth and a glorious finale of Ghost Love Score. It was clear that not all of the fans were familiar with some of the early material, but no one can deny the brilliance of the catalogue across the Decades and, for those later converts, this must surely have been an education.

SET LIST
Dark Chest Of Wonders
Wish I Had An Angel
10th Man Down
Come Cover Me
Gethsemane
Elan
Sacrament Of Wilderness
Dead Boy’s Poem
Elvanjig (Traditional)
Elvanpath
I Want My Tears Back
Last Ride Of The Day
The Carpenter
The Kinslayer
Devil & The Deep Dark Ocean
Nemo
Slaying The Dreamer
The Greatest Show On Earth (i, ii & iii)
Ghost Love Score 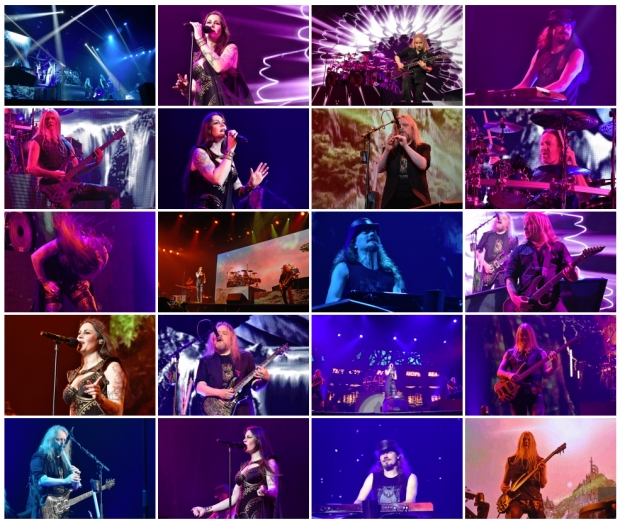