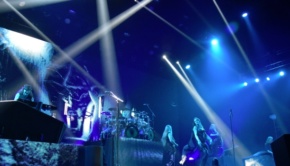 Birmingham Arena Monday, 10th December 2018 There have been huge changes for Nightwish in the 10 years since they last... Read More →

Nightwish’s Tuomas Holopainen has announced the release of his solo album entitled The Life And Times Of Scrooge McDuck. All... Read More →

Ms. Floor Jansen is a keeper. Also, we will be a six-piece band from now on, as Mr. Troy Donockley... Read More →