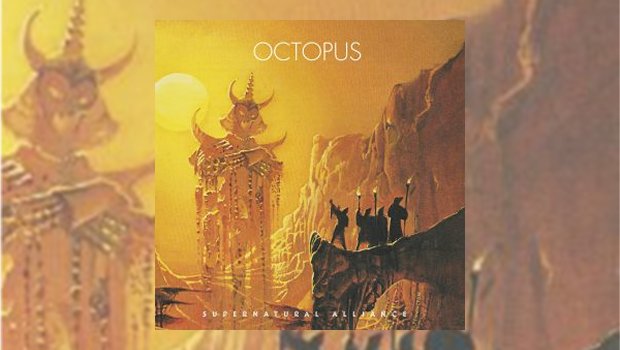 Rise Above Records have been on my radar since discovering the label nearly ten years ago in the very first issue of PROG magazine, with bands like Blood Ceremony, Astra, Purson, Electric Wizard, Beastmaker, Uncle Acid and the Deadbeats, and Diagonal, the label would peak my interest with its mix of Metal, Prog and Doom.

One of the bands from the Detroit scene, which was home to Frijid Pink, Alice Cooper, The MC5, and Iggy and the Stooges, to name a few, is perhaps one of the most interesting and surprising debuts to come out of the underground, a band called Octopus, launched 10 years ago by ex-Electric Six guitarist J. Frezzato and lead vocalist Masha Marjieh.

According to the interview with Dom Lawson on the Rise Above Records website, Frezzato had a dream about a giant spaceship/submarine shaped like an octopus which navigates the ocean after Armageddon. It’s an interesting story, like something straight out of a Roger Corman film from the mid to late ‘60s. Frezzato came across the 1996 book by Kenn Thomas and Jim Keith, The Octopus: Secret Government and the Death of Danny Casolaro. At that time he was writing subterranean psychedelic music, and that was when the light bulb went on.

With additional members including Matt O’Brien (Big Chief) on bass guitar, Todd Glass on drums, and Adam Cox on keyboards, Supernatural Alliance is the debut. It’s like a movie inside your head, and with amazing cover artwork by Alex Awn which takes inspiration from Jack Kirby, Moebius, Richard Corben, Alex Ross, and Chris Achilleos, Octopus make a nod to the stories from the Adult Illustrated Fantasy Magazine and the 1981 animated cult-classic, Heavy Metal, Supernatural Alliance being like a killer alternate soundtrack mixing the psychedelic metal approach from the opening sequence from Heavy Metal. The opening track, Beyond The Center, starts with galloping drums and blistering guitars to create an epic introduction.

Frezatto acknowledges the genius of Alex Lifeson in Rush’s Fly By Night to Hemispheres era, between Anthem and Cygnus X-1: Book II before Masha sings, “You’ll hear me when I say I’m leaving you with no escape”, then she adds some energy as her vocals go up a notch. You can imagine the story emerging and the evil that’s coming towards the planet Earth as Frezzato’s riffs and Adam’s keyboards duel as an alarm for the cavalry to prepare their weapons for launch.

The intensity rages before it slows down in the last few seconds as an aftermath. You can hear the Sabbath riffs on Slave and Master as Octopus keep alive their torch and legacy. With Gothic organ and guitar sharing the riffs, it’s the essence of the era of Sabbath Bloody Sabbath, Matt’s bass walking through these tunnels followed by Adam’s organ.

And then, the reverb effect on Masha’s vocals send them off in both time and space. On Strike (While the Iron is Hot) I felt a little tug between both the ‘60s British Invasion and the ‘70s Glam Rock genres, as if the Dave Clark Five had teamed up with School’s Out era Alice Cooper, doing a cross between the clapping section, call-and-response vocals and pounding piano that takes you back to when music was really good.

Child of Destiny (Inaugural Trilogy, Part 3) is straight out of Michael Moorcock’s The Eternal Champion, with ‘80s synths, organ and Frezatto creating the music for the series. The only criticism I have with this track is that it is only three minutes long and I just wished that it could have been a little bit longer, 7 or 8-minutes. However, Masha creates a mini-operatic format for this composition, but it is told through a narrative structure of characterisations, describing what they’ve been through, not only the struggles but the fulfilment of destinies. Adam’s futuristic synths along with Frezzato’s riffs give a sense of the journey that they have been through.

There are also nods to both the British Steel era of Judas Priest and Hawkwind’s Warrior on the Edge of Time as Frezzato channels the styles of Dave Brock, K.K. Downing and Glenn Tipton, while All The Love is a moody bluesy psychedelic ballad with a kaleidoscope atmosphere from Adam Cox and the wah-wah effects from the minor chords, before switching to achieve a mind-boggling sound as if the parallel universes are finally closing in.

Octopus’ debut album is a mind-blowing release which can knock you down in a single punch. I hope they continue to follow their true calling to combine stories, psychedelic metal, and early Prog music, throwing it together in an amazing blend. Despite starting 10 years ago, the Yellow Brick Road has now started for them and there’s no stop sign for Octopus.