Growing up in the seventies, Wishbone Ash, with their distinctive twin lead guitar sound, were one of the essential bands to follow. Their third album, Argus was an absolute classic and was named ‘Album of the Year’ by Sounds magazine. Geoff Ford spoke to Martin Turner, Wishbone Ash’s principal lyricist and creative force, lead vocalist and bass player during that era, for TPA.

Martin Turner is still touring and brought his Martin Turner Band to Derby’s Flowerpot on the ‘Vintage Years’ tour. I wondered if Martin had imagined he would still be touring into his seventies?

“At my ripe old age? it’s a bit of a surprise,” he admits, with a slightly quizzical expression on his face. “I never imagined that I’d still be doing this. Over the years I have tried, on occasion to, I wouldn’t say leave the music business, ‘cos I’ve always been a studio cat, but I veered away from live performance in favour of studio work. But it’s great to be doing both, really, they’re equally valid aspects of the same career. No matter what I do, fate always brings me back on track.

“With the Martin Turner Band we’ve kind of discovered that it is possible for us to perform whole albums, whereas the old band would cherry-pick certain tunes and leave out anything that was a bit tricky. We’re doing There’s The Rub on this spring tour and in the autumn we’re doing the first album, that’s a tricky one! There’s a load of songs that were written when we were just 20 years old!” 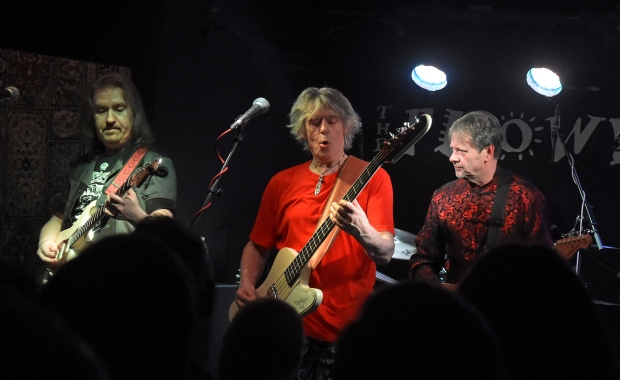 The tour is helping to promote a new limited edition box set, The Vintage Years (1970 – 1991), which is due to be released on 20th April: “There is a great big box set coming out, the whole collection of stuff from 1970 to 1991 with studio albums, rarities, photographs, posters, a book and a whole bunch of live albums that have never been released before. It’s quite a package – and it’s expensive!”

The Wishbone Ash sound is very distinctive and still stands out from the multitude of bands that were inspired to follow their twin guitar lead.

“People always think of it as two guitar players playing together but it didn’t happen that way at all,” Martin explained. “It was always a concept, from day one, to have two guitar players together, rather than fighting each other. I grew up on classical music and I can sing what is described as pseudo-classical melody, fairly easily. We could sing that, which we did, on occasion, and then do a harmony to it. When you work it out on guitar, which sometimes can be tricky, it’s not natural fingering. Then you sing the harmony which you transpose onto the other guitar. Moaning all the way, they are, that it’s really awkward. Come on! Persevere, and you get there eventually, put some bends in and it’s just a very identifiable sound. 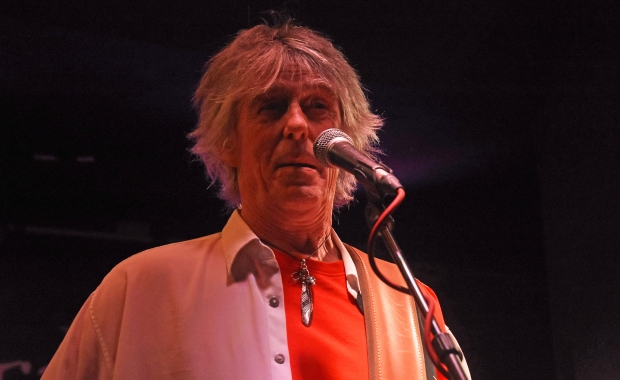 “It’s rich in melody, that’s the important thing. If you were composing that kind of stuff on guitar, it wouldn’t be the same. It’s a bit of a painful process but we realised very quickly, in the early days of the band, that it gave us a very recognisable sound, which is always good.”

Some of music from the early seventies has a knack of sounding quite dated but the Argus album to this day retains a lovely freshness and vitality. It is often described as having a medieval theme, something Martin disputes

“They vary from song to song. In the case of Blowin’ Free, it’s very up, a lovely anthemic ode to love.

“With the Argus material, in particular, those were big themes that I’d been pondering for quite a long time and meant to deal with but, around the time of Argus, I got to grips with it. The King Will Come is almost straight out of the bible. It’s not me preaching, it’s me just pondering a religious concept with which I neither agree nor disagree, I’m just putting it out there. Unusually because I got stuck after I had written the first verse and the chorus, which said it all, really, I couldn’t come up with anything for a second verse.

“I asked (Wishbone Ash drummer) Steve Upton to help me out and he came up with ‘the chequer board of nights and days’ which I think comes from a Muslim book by the prophet Omar Khayyám. So it is a multi-faith song.

“Leaf and Stream, Steve wrote the lyrics based on a song that I’d written for the second album but edited out vocal and just used it as an instrumental (Alone) and it was a very similar lyric, sitting by the side of the stream contemplating life. Steve did a great job and it’s a really lovely track.

“Warrior is about men, dictators and power-mongers making war and harnessing the energy of young men. That’s been going on since the beginning of time. I wrote Throw Down The Sword as a reaction to that so people didn’t just think ‘Oh, this guy is advocating war,’ to give it a balance. It is almost a hymn like when I was a young lad in the church choir, that’s a nice tune. 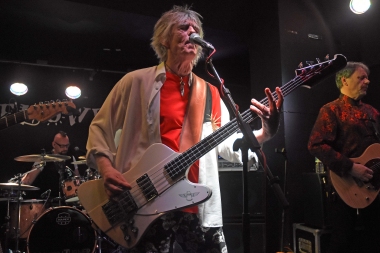 “Some songs, like Time Was, are very conscious of real life experience, usually involving emotional turmoil. Sometime World is me, believe it or not, thinking about reincarnation, you don’t get too many songs on that subject.

“I had the idea for Blowin’ Free around 1965 or ’66. I met a Swedish girl in Torquay. Loads of Swedish students used to come to Torquay every summer on an exchange.

“This one girl, Annalina, was like a healthy tennis player-cum-horseback rider, her daddy was a professor and so on, the polar opposite to me!

“I was a grimy little rock and roll rat, diving in and out of clubs, staying up till 2 or 3 in the morning. How we got together I don’t know! But we were young, spending time with each other. One day we sat in a car on Dartmoor, just watching a thunder storm roll down through the valley. We must have been sat there for the best part of an hour and never said a word.

“Finally I said ‘Do you mind if I kiss you?’ or something like that and she said ‘You can try!’ which became a lyric I actually used in the song.

“I had the idea for the mood and the theme of the song, I had written a few of the lyrics and I knew the shuffle rhythm that I wanted to use, along the lines of an old hippie tune by Steve Miller called Children Of The Future. 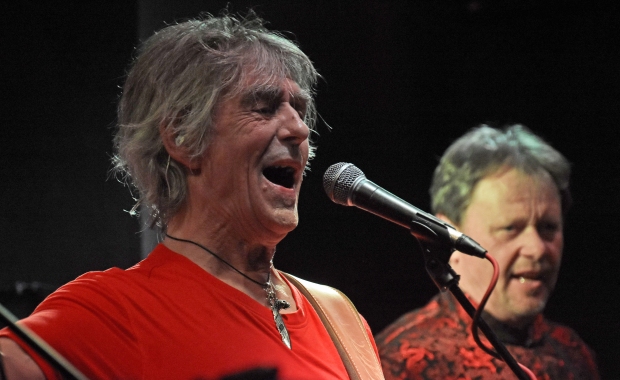 “I tried to explain it to (guitarists) Ted (Turner) and Andy (Powell), this kind of hammer-on technique in the key of D, a shuffle rhythm, and eventually they came up with the intro and we knocked the chords together and bingo! It was born, finally after several years.

“Very often that’s the way it is, you have the ideas, the little visions, and you store them and write bits down.

“With Blowin’ Free for instance, we tried to record that a couple of times and it just didn’t work. It was lethargic. ‘Now guys, come on! This tune is a celebration of young love, it’s got to really kick-arse! Give it some energy.’

“And, finally on the Argus album… Listen to the bass on that, it’s so pushy. It’s like me saying, ‘Come on, you will work!’ 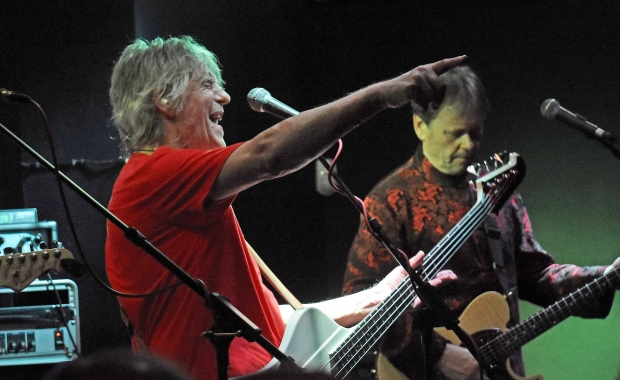 “The ironic thing was I thought it sounded really good and one day the producer, Derek Lawrence, said ‘Here Mart. This tune, Blowin’ Free, we’ve been chatting about it and all the other material is quite serious and this is a bit fluffy and poppie. Maybe it belongs on another album.’

“I’m like ‘No friggin’ way!’” Martin almost leaps out of his chair as he relives the moment. “‘It needs to be on this album precisely because it is different! If it’s all like that it’s going to be boring, one dimensional. It needs some balance!’

“I had to fight to for that to be on the album, and thank God, it was.

“It’s probably the closet thing to a single that Wishbone ever came. The BBC even asked us to go and perform it on Top Of The Pops which I wasn’t crazy about, We apologised and made some excuse about having a gig in Belgium. Most bands would have cancelled the gig and done Top Of The Pops.” 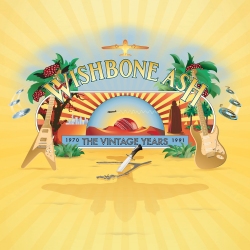 Despite musical differences in later years the four members of classic Wishbone Ash line-ups have each given their support to The Vintage Years project.

“Yes, I speak to Ted from time to time, Laurie, old soul, we had lunch together and a good chat last week. Normally when Steve comes into the country we get together and have a bite to eat. We are all into it. Andy has put his name to it, providing quite a bit of photographic material and a few tapes. Everyone needs to be involved, you can’t put out a box set like that without, at least, consulting everyone.

“Do you remember the expression ‘a record’? It’s a good word because it does record what is going on and becomes a record of that time and you can follow the progression of the band through all those years.”

On April 20th 2018, Madfish celebrate Wishbone Ash, one of Britain’s most enduring and best-loved rock acts, by releasing a comprehensive deluxe 30 CD box set, The Vintage Years. Loaded with rarities, memorabilia, a new interview and a lavish 156-page hardback book, a third of this new collection features previously unheard and unreleased material. 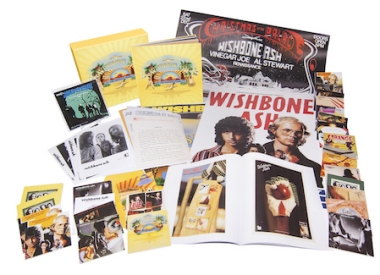 Following decades of being starved of unreleased material from the true vintage years from Wishbone Ash, fans will soon be able to enjoy the long-awaited, remastered anthology from this esteemed and influential band in its pure quality in both musical and printed content.

This box set is strictly limited to 2,500 copies and includes all 16 studio albums between 1970-1991, all of which feature bonus material including rare album outtakes, B-sides and 12 previously unreleased studio tracks. These are presented in mini-gatefold sleeves. Three of the 16 albums are currently out of print on CD (Nouveau Calls, Here to Hear and Strange Affair). The box set will feature brand new cover artwork designed by Colin Elgie, the original designer behind the award-winning Live Dates sleeve artwork.

[You can read Geoff’s review of the Martin Turner Band at The Flowerpot in Derby HERE.]