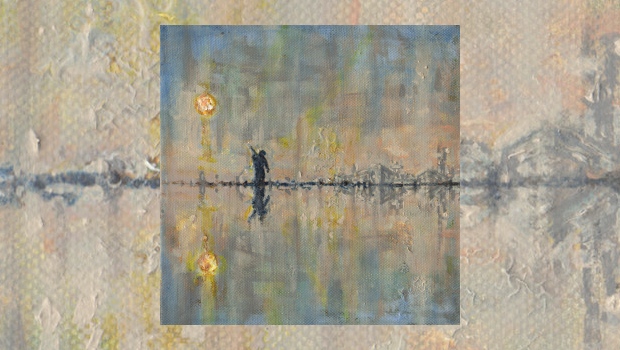 Solo, collectively or within a band format, Liverpool composer and multi-instrumentalist Neil Campbell has released sixteen albums in as many years. For my part I have been fortunate enough to hear most, review more than half, and happily report that there’s not a dud to be found amongst them. More over, each release shows a different aspect to the man’s creativity. The Outsider ~ News From Nowhere continues that momentum and with the promise of two further, related, releases during 2018, there is even more to look forward to.

The Outsider ~ News From Nowhere is a slight departure for Neil, in that this latest release is his first concept album and based on William Morris’ 19th century, utopian socialist novel, ‘News from Nowhere’. As alluded to above, it is also the first instalment of three albums, all to be released this year, which aim to explore “…the idea of how the world might be reorganised more equitably and ethically following some kind of large man-made catastrophe or natural disaster leaving only a few survivors”.

Neil’s adaptation of Morris’ novel starts with him searching for survivors along the coastline, and as the initial sea swell fades we are transported into what I can only describe as utopian, given that as I write this review we are gripped in the depths of the UK winter, with freezing weather, snow blizzards and traffic chaos galore. The flamboyant opening track conjures up images of warm sunny climes, days on the beach, or picnics on the river bank, and somewhere I would really like to be right now ;0)… Such is the joy of instrumental music, where interpretations may well differ from the intended premise.

As our traveller concludes his morning ablutions we happen upon A Market By The Way, portrayed here in a four part suite. Initially the musical scene is similar, bright and breezy, and with the addition of Laurence Cocchiara’s wonderful violin create ten minutes of classically infused music that delights and enthrals.

The track seamlessly weaves its way through, what I imagine to be a countryside market, beset with cafés and a multitude of colourful characters – all basking in the afternoon sunlight and soaking up the atmosphere. The closing (Part 4) takes us serenely to the end of the day…

The Kensington Wood is more familiar territory as Neil takes centre stage with classical guitar and minimal layered accompaniment serving up a sublime, gentle interlude, before the up-tempo Children In The Road. A playful piece, befitting it’s title. And if ever a piece of music captured such a thought, then the aptly titled Mulleygrubs, which interpreting Morris’ intent rejects the notion of melancholy, does so in spades.

Clara on the other hand serves as the first part of a romantic interlude, with its delicate cascading guitars setting the mood, before Neil once again effortlessly combines folk flavours and classical textures, during the three segmented Concerning Love (incl. Questions and Answers). Mention of Helen Maher who shines during the joyfully uplifting middle section.

In Morris’ novel the main character, William, falls into a deep sleep, in the late 1880s and wakes some two hundred years later. His Victorian society has been replaced – poverty, misery and capitalism no longer exist and the ugliness of the industrial landscape has vanished and replaced by an idyllic pastoral paradise.

Neil, along with Laurence Cocchiara, capture that quintessential English idyll wonderfully in the evocative Dinner In The Hall Of The Bloomsbury Market. This really an exquisite piece of music and has received many repeat plays, however we must move on and the quietude is shattered with the handclaps and Moogy synths of How The Change Came, which conjured thoughts of Mr Wakeman’s Six Wives…. All is restored however in the tranquil The Little River And The Journey’s End calms and beguiles, before the gentle swell of the sea and the peeling bells fade into the ether.

Once again Neil has delivered an inspired album and one that bodes well for parts two and three later this year. I am consistently impressed with each of Neil Campbell’s albums, which demonstrate not only excellent technical and compositional skills, but the ability to write music. Music to be listened to and enjoyed – and music that is very seldom formulaic or repeated. He remains one the UK’s shamefully undiscovered contemporary composers and I for one hope a larger audience awaits him soon. Some may be able catch Neil at this year’s EppyFest 7 festival in July and let’s hope this is the precursor to several more high profile invitations.