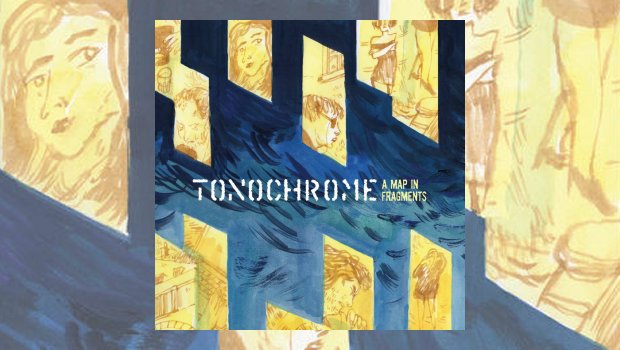 Tonochrome – A Map In Fragments

When Bad Elephant Music signs a new act one can never quite predict what the band will sound like, though the label seldom disappoints. Described by the label as an “art-rock quintet”, it is fair to say that in Tonochrome you will hear rock with a hint of jazz. The band also cites pop and grunge as influences. I wish it was easy to hear how these influences manifested themselves as it would have made writing a review of this excellent, gentle rock album much easier – with lots of references to Soundgarden and Nirvana! Instead I was reminded of music that probably didn’t fit any of their influences. In any case I think it is without question that they do, at least, fit in with the label’s self-coined ‘new progressive’ categorisation.

The impression I get from the Bad Elephant press release is that this is a band designed to bring the songs of founding member Andres Razzini to life; he “founded Tonochrome in 2011 somewhere above the Atlantic on his travels between his native Bolivia and his adopted home in London”. Even so, there are strong hints of music from other bands who share personnel with Tonochrome. Charlie Cawood (whose solo album review you can read Here) doesn’t get writing credits on Tonochrome’s album but two tracks in particular made me think of Knifeworld, and let’s face it, how can that be a terrible thing?

There are, in fact, no writing credits, at least on the Bandcamp page, so it seems that the band is very democratic. It could be simply that the bands share some DNA. Tonochrome feels like a cohesive band and their music a product of shared process. If Andres has written the songs, the band bring a distinctive “something else” to that process.

I developed a clear impression that A Map In Fragments is intended as an album of distinct parts, an impression underlined by the use of tracks named Interlude 1, Interlude 2 and Interlude 3. Given this clear delineation, an observation, but by no means a criticism, is that if there is an intention to use the interludes to split the album up then I am missing that subtlety. I felt that the first five tracks are a 15-minute segue and the next two bleed together. Disputed Area felt very much like the first significant change in direction and this comes after Interval 1 and Interval 2 have long come and gone. Just Like Us has a distinct Knifeworld feel to it and heralds what I felt was the distinct beginning to the third section of the album.

This aside, and at the risk of coming across as deeply pretentious, listening to A Map In Fragments feels nevertheless as if I am taking a little journey with the album as an entity. Starting from the opening notes that feel like birth without the beautiful unpleasantness of biological reality, the music embodies a certain innocence. It grows as harmonies of woodwind and vocals are added. The core of the band is enhanced with subtle depth and breadth to their sound, a broad spectrum that eludes many. Even as the drums and strings are introduced the innocence of the sound is retained. There’s a gentleness to the sound that stabbing horns would not – could not – convey. There’s a sense of happy expectation during Interlude 1, but the innocence is supplanted with a sense of melancholy as certain vocal lines popped out at me and added to this feeling. The entity is blossoming with the piano in Interlude 3. You need to hear the album to see where it goes from there.

I can’t quite put my finger on it but, somehow, I heard the same qualities as I hear in one of my favourite albums, Chris Squire’s 1975 Fish Out Of Water, and in other places, hints of echoes of impressions of the early 1972-74 incarnation of Yes in their most full-on Close To The Fragile Oceans phase. Perhaps the sixth track, Disputed Area, with its arpeggiated bass, further adds to the overall impression that the songs might be the parallel evolved product of a similar process to that which the late Mr. Squire used.

Despite the allusion I think it is also important to point out that this doesn’t feel like an album from the 1970s. You can probably sense that I’m searching for a frame of reference that will hook your interest… and I really must! Your ears deserve this album. It feels lazy to mention other bands that share personnel and compare the music. It is inevitable that humans will do this, however, so it wouldn’t be honest of me to omit my impressions. Tonochrome are their own band, using recurring, sometimes repetitive musical themes that morph and are further modified by changing chord progressions. No riff becomes boring and droning is avoided. In places the band positions chords over riffs, changing the emphasis on key notes. This album is not one of those “by numbers” albums.

By the third section of the album, as I hear it, and like any good album A Map In Fragments has displayed its high and less high moments. It might be difficult to pick a favourite song, especially on an album that really does ask to be viewed holistically. For me there is a stand-out track in Disputed Area. Were I forced to get all binary then the track with least appeal for me is Humbled and Broken. It starts well with a lovely laid-back keyboard section and soft vocal accented with strings and some tapped guitar. Then it morphs into a rather jagged dub-ish mash. The band then gets firmly back on the rails with the penultimate track and reverses the trend set in Humbled And Broken by reprising a theme from Disputed Area, transferred from strings to lonesome pianoforte, augmented with staccato strings, grabbing other themes as it goes, snowballing into an (almost) chaotic collection of rhythms and melodies which suddenly crystallise into a track that wouldn’t sound out of place on a Snarky Puppy album. This all adds to the overall “concept album” feel of A Map In Fragments.

This album brings out the Sheldon in me. It feels like it needs to be listened to in in its entirety and in sequence. Shuffling the tracks would be akin to the madness of reading the chapters of a book in random order.

I am developing a modus operandi when reviewing albums. If you wonder what this is then take a look at my other reviews on The Progressive Aspect, yet A Map In Fragments didn’t allow me to follow this methodology. I didn’t know where to start and I had to think hard to rationalise the album in a way that made sense to me. I found it difficult to convey why I think you should buy this album – as indeed, I do. Whilst some reviewers approach an album by analysing it on a track-by-track basis and trying to convey what each song sounds like using words, I find this approach unsatisfying to write and harder to read, though some readers of reviews prefer, even expect this approach and there is nothing wrong with that. You might ask whether this minor revelation says anything about the album, but I’d argue that it does. It made me work hard. It isn’t hard to listen to, but it isn’t easy to quantify. That is a good thing.