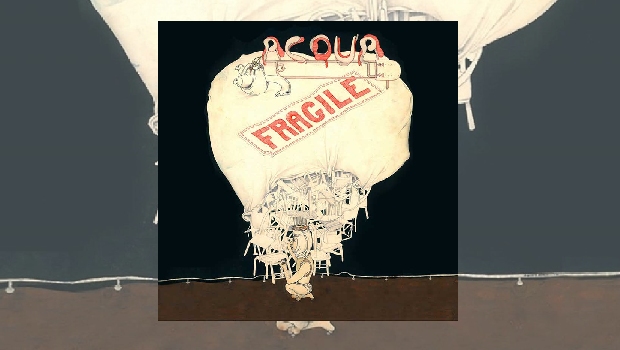 A New Chant is that perfect excuse to take a little walk down memory lane, an unmissable excuse to wipe the dust off those old CDs that represented the golden era of Italian Progressive rock, to take them out for another spin. Acqua Fragile was quite at the forefront, being on the scene in the early half of the 1970s and they are probably more fondly remembered for giving PFM Bernardo Lanzetti, the Italian Peter Gabriel. For a reunion to happen four decades later – well, in my head, that in itself is a phenomenal achievement.

And four decades later – nothing has changed. Blindfolded and hearing this CD, it is quite difficult to pin down the fact that this is a 2017 album performed by some of the fore runners of the ’70s era progressive rock (maybe the song lengths would seed some doubts!?!). Sprawling in its instrumentation (bombastic is always the Italian trait right?!) and aided by a host of guest musicians, it is hard to imagine the trio not having enormous amounts of fun making this album. There is enough variety in terms of song structure and timbres to keep you interested for the 40 odd minutes the album lasts – a very pleasant length indeed!

Lanzetti’s vocals have audibly matured, but I say this in the nicest of ways. He is in complete control of what he has set out to achieve in terms of the dynamic range he delivers in the different tracks, from the lilting timbre of the opener My Forte to the almost-operatic All Rise. Primarily keyboard and guitar driven, the album has a strong presence of strings and synths that lend the grandiose feel – something that harks back to the heyday of the genre. The best part about this album, which immediately grabbed me, is that there is no lack of technical virtuosity and instrumental craftsmanship – Alex Giallombardo’s guitar deserves special mention here as he delivers a vast array of sounds that fit wonderfully well into each theme on display.

The first three tracks are easily the highlights, a fantastic representation of all the musical ideas that permeate this album, and all of this in around 15 minutes! The album opener is a gentle yet arresting piano driven acoustic delight and in direct contrast is the driving high octane Wear Your Car Proudly – relentless in energy it showcases a lot of the technical wizardry that the band display. Neatly sandwiched between the two is The Drowning which serves as a perfect bridge between the musical ideas that segue beautifully into one another. A track by track breakdown would only end up serving up more clichés and hyberbole – this small sample is testimony enough!

The sleeve notes show the trio looking back at photos and reminiscing about the good old days with broad smiles on their faces. Without a doubt the smiles would have been broader while they were recording this outing, for this is one hell of a reunion album, especially considering it was made after a break of 44 years!! A jaw dropping effort that unequivocally announces the return of Acqua Fragile to the stage of progressive rock.