Alongside Andrew Latimer and Camel, Pendragon are perhaps one of the U.K.’s most important and seminal progressive rock bands still actively recording and touring today. It is not simply a matter of longevity: Pendragon will celebrate an impressive 40 years together in 2018 – only 6 years behind Camel and without the interlude. 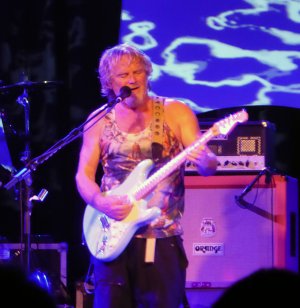 What has always been so impressive about their music is the deeply creative impetus at the heart of Nick Barrett’s song writing to be genuinely innovative, pioneering and above all receptive to and welcoming of new ideas, influences and trends. Pendragon continually push forward in exploring the boundaries of progressive music and often do so despite and even in spite of quite vocal feedback from a hugely loyal fan base.

Seeing them do this in the context of a live performance is always something a bit special and tonight we find ourselves in their favourite London ‘home’ of 229 The Venue. Originally built as part of an international student accommodation complex in 1965, it was refurbished in 2007 as a dedicated multi-purpose entertainment venue, though unfortunately on a number of occasions I have found it can be acoustically challenging.

No such worries tonight. Fresh off a successful sojourn to Japan, the band are in scintillating form. A thunderously vibrant rendition of As Good As Gold is immediately followed by a fresh and alluring performance of Paintbox, which in turn leads to the thoroughly captivating A Man of Nomadic Traits. Despite some early problems which are quickly resolved, Barrett’s guitar work often borders on the extraordinary in the sheer range of expression he conjures throughout the evening.

The song selection is exemplary in highlighting the particularly gratifying change of pace, tone and emphasis of which their catalogue is capable. The Shadow is a wistful, playful and uncanny symphony of both textures and moods. Peter Gee moves to acoustic guitar for the serene and moody The King of the Castle. Faces of Light and If I Were the Wind are sublime in the sheer power of emotion and resonance they convey, whilst the anthemic Beautiful Soul and Nostradamus are an absolute delight in harnessing the disciplined and breathtaking power of a band bristling with spirit, dynamism and energy.

I confess I was initially sceptical about the addition of the two backing singers for recent tours but this evening Zoe Devenish and Verity White supply the perfect demonstration of why this arrangement is now an essential feature of the touring line-up. Their exquisite and at times heart-moving multi-layered vocals bring a distinctive richness and permeating presence which endow the music with passion and a profound poignancy. 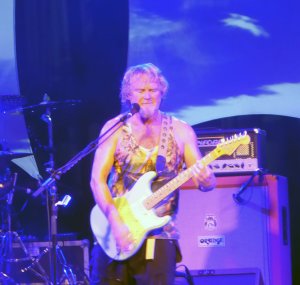 The one pause for thought and even concern during the evening is the now seemingly mandatory playing of This Green and Pleasant Land. The song appears to divide fans with its strongly nationalistic lyrics, particularly in a post-Brexit Britain, and the opening chords signal the start of queues forming at the bar and for the toilets, whilst others push to front and join the refrain with hearty abandon. It is an unfortunate sole note of discord in the midst of what is otherwise a fabulous evening.

The enchanting Breaking the Spell is a dazzling end to the main set. Jan-Vincent Velazco’s drumming is a masterful counterpoint to Barrett’s inspired, soaring lead guitar, Peter Gee’s bass combining well with Clive Nolan’s rippling keys to nurture and enhance the swelling soundstage and gloriously climatic conclusion. They rightly deserve the tumultuous applause and boisterous recognition which follows them off the stage.

To hear Netherworld is an unexpected delight which again showcases the extent and diversity of material they have at their command. As the first encore it’s a wonderful opportunity for a focused change of pace, atmosphere and ambiance. It’s a technically tight song which gives the appearance of being relaxed and laid back where in fact watching the band shows exactly the opposite is true. Indigo marks a return to more traditional ground, raising the tempo once more and delivering a heady mix of discordant pomp and thoughtful harmonies.

The decision to start early and end early so folks have a chance to catch the last train home is to be heartily applauded and widely encouraged. It is rewarded with a full house still present as the final note sounds and a long lasting rapturous appreciation rings out. They never fail to set the stage alight and tonight is certainly no exception. The Pendragon experience really is something special, to be savoured, appreciated and enjoyed. They are a remarkable band who rightly stand at the forefront of British prog. If you get the chance, don’t hesitate.

SET LIST
Intro from The Masquerade Overture
As Good as Gold
Paintbox
A Man of Nomadic Traits
The Shadow
Masters of Illusion
The King of the Castle
Beautiful Soul
Faces of Light
Nostradamus (Stargazing)
If I Were the Wind (and You Were the Rain)
This Green and Pleasant Land
Breaking the Spell
~ Encore:
Netherworld
Indigo