The venue is a modern, purpose built standing-only space above a shopping centre, with the surprising added bonus of having an un-sticky floor, clean enough to sit on should you be so inclined. Boasting a capacity of 800, I would guess it was just over half full by the time the headliners walked on stage at 9pm precisely. For a band that have been going for nearly thirty years this is not what they would have hoped for, I’m sure. No wonder this was their only gig over here. I sometimes despair at the unadventurous nature of the U.K. rock audience… ho-hum.

The support act Sleep Token was an odd mix of metal and pure pop, played by a band in horror masks and cloaks. Musically they were somewhat formulaic, in the tried and trusted quiet-loud-quiet-F’KIN LOUD nature of most of the songs, and accompanying theatrics by rote. When they diverted from the formula they showed some promise, mostly down to the singer, whose extraordinary range made them just about bearable.

Motorpsycho, the house band in the drinking halls of Valhalla, got their set off to an energetic start with a furious rendering of A.S.F.E. from the stupendous new album The Tower, rocking with a primal force that had the audience bopping like crazed mountain trolls at the ritual burning of a longship in honour of Odin. Those of us towards the upper age range of this gratifyingly mixed audience, both in terms of age and gender, threatened to twang something if we didn’t look out, mild bopping and/or pogoing going way beyond the doctor’s prescription to “get more exercise”, I shouldn’t wonder.

After that, a nice 10-minute space jam is just what the chiropractor ordered, and off we sway to the cosmic sounds of Intrepid Explorer, the second of six songs played tonight from The Tower, which as its cover hints, is a veritable garden of earthly delights, and if you’ve read this far, I ask, nay demand, that you buy it now. You will not be disappointed. When this band get into the groove on one of their long jams, the sheer relentless intensity takes me back to Hawkwind in their Space Ritual prime. This live experience is joyously exhausting!

New drummer Tomas Järmyr fitted in seamlessly, and his powerful rhythms were the fuel that powered the many visceral jams into interstellar overdrive. Guest player Kristoffer Lo was something of a star, playing all manner of keyboards and synths, possibly a theremin, a guitar, and last but by no means least, a flugabone, which is an outsize trumpet. It may well be that Tomas joining the band led them to Kristoffer, as the two had collaborated in the past. The flugabone added extra layers of musicality to the likes of Upstairs-Downstairs, and Stained Glass, both from the 2000 album Let Them Eat Cake, which is new to me. The latter has a similar stoned vibe to The Verve’s quieter psychedelic numbers. I can only assume Richard Ashcroft was a fan. Methinks I may have to buy this album! Motorpsycho have been making music for nearly thirty years, and their attendant vast discography is always capable of including unexpected musical diversions like this in their live sets, diversions that make this band such a delight to witness in the live environment.

Kristoffer’s presence allows Snah to stretch out, soaring away over the pummelling backing of Bent and Tomas, whose rhythmic heft nails it to the floor. The West Coast vibe that weaves its way through the The Tower, especially in its latter half is largely forgone in favour of the rockier numbers, not that I’m complaining! Looking at the set from the following night’s gig in Amsterdam, it seems the Dutch got a more laid back offering, with both A Pacific Sonata and Here Be Monsters’ Lacuna/Sunrise in the set list.

We get on the time machine and go back to 2008 for The Alchemyst, another head shaking trip of some note, wherein Bent’s clean tones are in stark contrast to the serious beating he’s giving his bass guitar. Lemmy would have approved. Following that is the aforementioned Upstairs-Downstairs, a well-earned breather from the fever pitch excitement of its predecessor.

The fulcrum of the set is the epic Ship Of Fools, a place where sonic grandeur gives way to stretched out driving rhythms and riffing of subtly accumulating power, and another winner from The Tower, an album that doesn’t have a weak track on it. 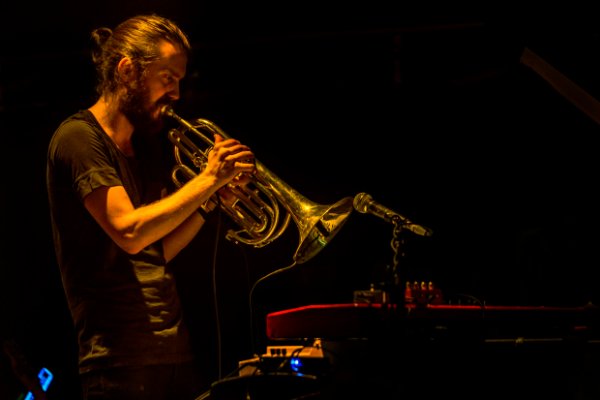 The song entitled The Tower has the most fantastic heavy melody, and has become this week’s earworm, its low rumble is still reverberating around my cranium days later. By the time we get to Bartok of the Universe, one particularly enthusiastic and very hairy fan with a flying mane of very long Viking-blonde hair was giving it the full-body headbanging treatment, off in his own world. Luckily for me I was standing some distance from him! After that the horn returns for the heady stoner space rock trip of The Wheel, and then the mothership comes in to land to the rather odd but strangely calming Plan #1, the set ending with two vintage numbers probably older than a handful of tonight’s audience.

After the encore of Pills, Powders + Passion Plays, its indie rock sounding almost fey after the beast of a set that had come before it, the comedown is complete and the audience troop off, knackered but happy.

[Photos by Esben Kamstrup, used with many thanks and by kind permission. You can see more of his images from the gig HERE.]