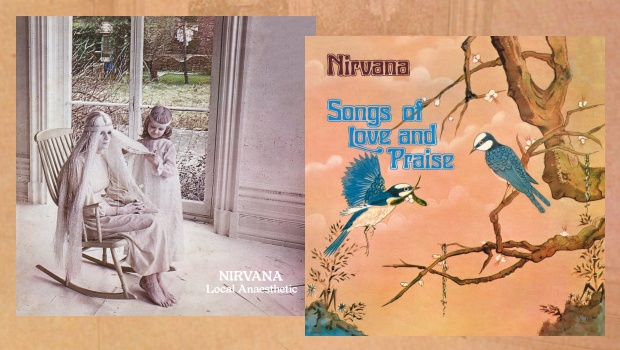 The original Nirvana were a U.K. psych-pop band built around Irishman Patrick Campbell-Lyons and Alex Spyropoulos, who unsurprisingly came from Greece. They had a couple of minor hits in the late ’60s, most notably with Rainbow Chaser, and had their own stitch in Rock’s Rich Tapestry for being the first band to release an album on Island Records, so says Campbell-Lyons, the rather wonderful The Story Of Simon Simopath preceding Traffic’s Mr. Fantasy by a few weeks.

After a third album got caught in the fallout of shady business shenanigans – the highly collectable Dedicated To Markos III – Nirvana split up and the duo went their separate ways.

Three years later Campbell-Lyons, now an A&R man and occasional producer at Philips hip underground subsidiary Vertigo Records, began to put together ideas for a possible album that would later become Local Anaesthetic. The Nirvana name was used with Spyropoulos’ blessing, in order to give the record more of a chance in a rapidly crowding marketplace, although essentially it was Patrick’s solo album, made with the help of many guests.

Made while going through a traumatic divorce, the first side is not much more than an extended rock jam, which was no doubt cathartic given the circumstances, but Modus Operandi is not especially memorable. Much more interesting is Home, a side-long song suite yearning for the stability of hearth and home, with some nice guitar soloing, presumably by Jade Warrior’s Tony Duhig. Very Beatles influenced in places, as was so much music released in 1971, which in itself is no bad thing, it does manage to hold one’s attention for its duration although it is definitely of its time.

As part of the Vertigo “swirl” label’s output, it was and is probably only essential for us obsessive collector types. The cover is another one of Keef’s lovely creations for the label, and probably the most attention grabbing thing about the original LP.

Nirvana – Songs of Love and Praise

Patrick Campbell-Lyons followed up the wayward curio that was Local Anaesthetic with Songs of Love and Praise. Released in 1972 on the Philips label, it contains reworkings of two older tracks along with new compositions from our talented one-man band. Once again it is strictly a solo album with roughly the same guests as the previous record, but uses the Nirvana name for consistency and commercial appeal, although Patrick claimed on the original album liner notes that “Nirvana has never been a group, band, or solo artist: it is simply a centre-point for various musical journeys I embark on”, and by the time of this, the fifth album to have used the Nirvana name, the statement was probably true.

Songs of Love and Praise is a much better album than its predecessor as it relies on song writing rather than somewhat prosaic jamming and conceptual experimentation. The reworking of Nirvana’s biggest hit Rainbow Chaser opens the album, and following that is Please Believe Me, a tune that borrows a refrain from Carole King, rounded off with some nice orchestration.

During the album Patrick manages to create a vibe not unlike Clifford T. Ward, who was breaking through at roughly the same time as this record was released, so any similarities are probably purely coincidental. There are certainly worse sources of cross pollination, that’s for sure. Snatches of the ’60s pop-psych whimsy Nirvana were known for during their heyday twinkle and vanish occasionally, but for the most part Songs of Love and Praise is quality singer songwriter fare that unfortunately got buried along with hundreds of other albums at the time that were in a similar if inferior vein.

She’s Lost It is a nice bit of piano barroom boogie that pootles along quite sufficiently, Jon Field’s bongos giving it the necessary hippie shake in its tailfeather. The second reworking is Pentecost Hotel, from Nirvana’s 1967 psych-pop proto rock opera The Story of Simon Simopath, and here Patrick goes for the full-on schmaltz treatment by introducing a school choir into proceedings. Funnily enough, it works, although I kept having Top of the Pops flashbacks starring Clive Dunn on a rocking chair…if you’re a Brit and old enough, you know the rest!

I Need Your Love Tonight I can well imagine being sung by Kevin Ayers, louche and laid back as it is. My favourite song on the record, it features some lazy wah wah picking that gets almost animated before the song fades away, and a summery groove…and a cheeky piano snatch of that Carole King refrain again!…that enables it to float by in a dreamy reverie. The high quality remaster picks out some flamenco themed guitar on Will There Be Me, another effortless waltz through a summer garden. The album ends with the seven minute Stadium, bookended by a song that replete with a brass section recreates a ceremony in said enclosure, 1972 being an Olympic year no doubt being the inspiration, but obviously recorded before the sad events that unfolded in Munich. Between the two song sections lies a jazzy jam led by Patrick’s rather fine piano playing. A bit of an epic, showcasing Patrick’s rather fine arranging capabilities.

The second bonus track Ad Lib is exactly that, and a perfect extract from the interminable boogie of Modus Operandi from Local Anaesthetic, the four minutes of this edit being really all you need to hear of that particular track!

Songs of Love and Praise is a more than decent album that deserved far more success than it got at the time, and is definitely the better of these two reissues.

Footnote: Patrick has a new album out, You’re A Cloud, I’m A Comet, which judging by the soundclips I’ve heard shows that the Irishman now resident in Greece has not lost his touch with a catchy melody.

MUSICIANS
There are no credits on any of the various releases of either of these albums, but here goes:
Patrick Campbell Lyons – All manner of instruments, but mostly Keyboards of some variety, aided by:
Jon Field – Congas
Tony Duhig – Guitar
Pete Kelly – Piano
Mel Collins – Saxophone
Southfields School choir – Choir (on Pentecost Hotel)
…and many others I’ve not managed to pin down!