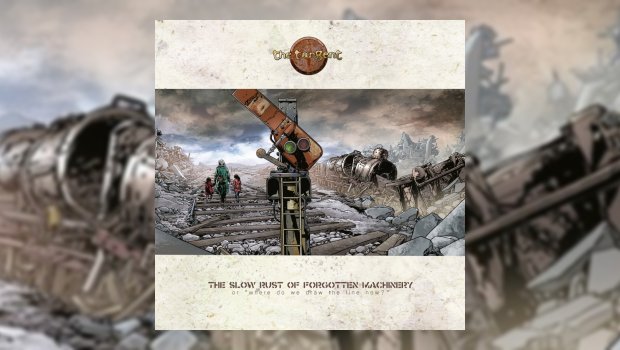 Andy Tillison has always been a composer who wears his heart on his sleeve, and on The Slow Rust Of Forgotten Machinery he’s in full-on political commentary mode, lashing the Brexiteers and the anti-refugee brigade with whip-like lyrics.

It stands in stark contrast to 2015’s A Spark In The Aether, which was generally a sunny, upbeat and wistful album that delved deeply into Tillison’s Canterbury influences. But in between there’s been the Brexit referendum and Trump and Le Pen and his own health problems – a heart attack that not only laid him low for some time but also made him fear he had lost his musical mojo.

His return came with the 17-minute A Few Steps Down The Wrong Road – a powerful, uncompromising blast at the ugly face of British nationalism and the Brexit campaign with a sinister warning at the end. Almost punk-like in its intensity and anger, it had Tillison blasting out a political poem over the top of a heavy, frantic backing with ironic snatches of Gustav Holst’s I Vow To Thee My Country.

It pretty much divided opinion down the same voting lines as the referendum, with Brexiteers harrumphing that politics should be kept out of prog, while Remainers sniggered behind their hands and placed their pre-orders.

And that’s a bit of a shame because it distracted from what was, instrumentally, a thoroughly entertaining piece of music, packed full of all the influences that make The Tangent such a unique listening experience – there’s jazz, rock, prog and punk jostling for attention.

Trouble is, political songs tend to be of the moment and therefore have a short shelf-life. It’s difficult to see A Few Steps… becoming a well-loved standard – but it is still miles better than Roger Waters’ rather tired impersonation of Victor Meldrew on the edge of a nervous breakdown.

More successful perhaps is Slow Rust, the 22-minute centrepiece of the album, which looks at the refugee crisis first from the viewpoints of the gutter press and the twitterati and then from those who are forced to make the perilous, frequently deadly journey from their homes to a safe haven across the sea. Tillison’s strength on these long pieces is his sense of rhythm and melody and his ability to get something catchy and interesting going almost immediately. While some bands test the listener’s patience with drawn-out, portentous intros and drearv repetition, Tillison gets down to brass tacks ASAP, and the track fairly bounces along through its many scenes and sections.

His vocals – not the most tuneful in prog, although they serve his songs well – blend beautifully with Marie-Eve de Gaultier’s and the effect reminds me of the Northettes on the Hatfield and the North albums – it softens and warms the vocals, sandpapering the edges off some of the harsher lyrics.

And the lyrics certainly make their point – “They’ll take you on at the Daily Mail,” he cries, “and use your talents to whip up hate.” “We came back from the future and Biff was the President.” “It’s like a jungle – sometimes it makes me wonder how I keep from going under.” The forgotten machinery that’s slowly rusting represents the crumbling transport routes refugees are forced to use as they try to reach the lands of milk and Ipads – the CD artwork shows twisted rail lines and rotting locomotives.

These are the two angriest tracks on the album – elsewhere things get a bit more reflective and less angsty. The opener, Two Rope Swings, began life as Tillison’s contribution to the Harmony for Elephants project. Tillison describes it as a pocket symphony, encapsulating everything The Tangent represent in 6.5 concise – by prog standards – minutes.

It opens with solo piano and Tillison’s plaintive vocals before running through the whole gamut of The Tangent’s musical styles, focussing on jazzy keyboards and Luke Machin’s expressive electric guitar.

Doctor Livingstone (I Presume) is an instrumental, the first piece of music Tillison wrote after his heart attack – the title represents him finding his muse again. It’s nearly 12 minutes of joyful, dramatic and intricate jazz fusion.

But the highlight for me is The Sad Story of Lead And Astatine, a 16-minute tour de force that starts as a moving ballad but then turns into the most fabulous jazz-rock instrumental, with Tillison and Machin trading keyboard and guitar riffs while Theo Travis intersperses with the flute. There’s even a drum solo from Tillison – who plays drums throughout the album and does so with great precision and power – and a brief bass solo from Jonas Reingold. It’s evidence that when The Tangent really let the jazz vibe take hold of them there are precious few prog bands who can keep up.

So to conclude: There are elements of this album that some listeners may find a little preachy, even objectionable if they fail to share the writer’s political views. But look beyond that and there is gorgeous, superbly played music here and moments of sheer joy and beauty.

[You can read Kevan’s recent interview with Andy Tillison for TPA HERE.]