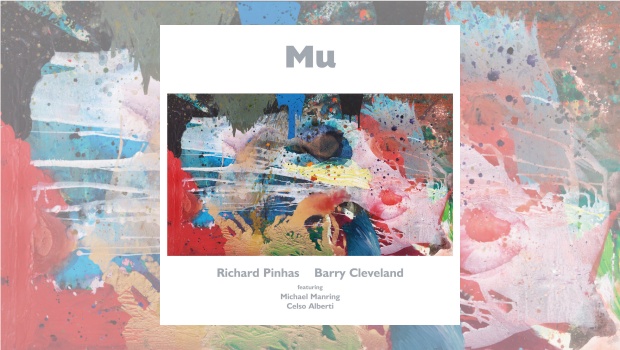 A meeting of two fiercely independent-minded guitarists like Richard Pinhas and Barry Cleveland could go one of two ways, and thankfully Mu is very much a case of individual egos being left at the door for the good of the whole, and what a whole this towering album turns out to be.

Firstly, an introduction: those of you with any interest in the experimental end of the progressive guitar spectrum will doubtless have heard of French guitar master and inventor of Metatronics, Richard Pinhas whose heavy avant prog band Heldon is the stuff of legend. Since the Heldon daze, Pinhas has forged a remarkable solo career, releasing many fine albums both in his own name and in collaboration with other luminaries from the worldwide avant music scene, veering from crystalline ambience to dense heaviosity, but always with a wilfully experimental heart. He also has a PhD in philosophy from the Sorbonne, and Heldon may be seen as an extension of his dissertation “examining the intersections of time, time manipulation, science fiction, and analog electronic music”, and indeed, philosophical themes are abundant in all his music.

You may be less familiar with American guitar craftsman and sound manipulator Barry Cleveland, who has released a succession of experimental but highly listenable albums, mixing advanced production techniques with a penchant for exotic instrumentation and percussion. Check out his albums Mythos and Hologramatron in particular, the latter being propelled along by the rhythm section that appears on this recording.

Mu spreads massive sound arcs across a huge sound canvas the size of a galaxy, by way of four explorations of sonic possibility, one of a mere four minutes, two of around nine minutes and one epic length excursion by the name of I Wish I Could Talk In Technicolor. Powered by the deep funk bass of Michael Manring and the muscular tub-thumping of Celso Alberti this 25-minute excursion into ego-less self-awareness plays the part of a cosmic meditation on the meaning of nothingness (Mu), or if you’re not in the mood for over-intellectualising, it is simply a psychedelic trip like no other you will hear this year. I’m tempted to describe it as a “towering sonic cathedral in the sky”, but common sense may get the better of me, although there can be no doubt that Mu is bold in ambition and shows no fear in reaching for the stars.

Cleveland and Pinhas had long considered a collaboration and when everything eventually fell into place they played several concerts together in the former’s home turf of the Bay Area of San Francisco during which time span this album was laid down. Entirely improvised and later augmented by Cleveland’s “post-production compositional development”, the end result is staggering, hypnotic, and utterly beautiful. The climax of Zen/Unzen, the track being in itself a testament to Celso’s powerhouse drumming, seven minutes into which one or other guitarist lets loose a wild and joyous effects-laden solo that sounds like a chorus of angelic trumpets being blown to within an inch of their lives by a five-lunged alien elephant-man, had me let out a little whoop of joy as it moved an ornament across the shelving. Played out in the company of some wonderfully dextrous electric bass playing by Manring, this joyous freeform ur-rock excursion is the standout for me and forms the driving pulsebeat heart of an album that marries edge-of-seat electronic and guitar manipulation with an organic and very human soul.

We enter this strange world by way of the steamy synthesiser jungle and computer-generated rhythm of Forgotten Man, waves of sound ebbing and flowing into the distance, continue through the slowly unfurling space symphony of I Wish I Could Walk In Technicolor, and on into the fulfilling ur-rock of Zen/Unzen, before leaving on the contemplative Parting Waves. The trip and the album have been a success and a revelatory affair that merits repeated revisits. A must for the lover of kosmische musik, and for the adventurous listener in general.