The Globe in Cardiff was sold out on Guy Fawkes Night to witness some musical pyrotechnics from this outstanding band, currently on the road in an ‘electric’ rock format after successfully touring and filling historic Cathedrals as an acoustic outfit in the last year or so.

As a band that has transformed themselves from a young doom metal band into artists capable of emotionally and spiritually laden, sensitive but powerful rock music since the turn of the 21st Century they have never followed the conventional path. To demonstrate that approach they are using this tour in between albums to ‘road test’ some new material in front of a live audience, and commenced with new song Gottyou to. Despite the initial problems with the sound for Vince Cavanagh’s mic which left him muted the crowd appreciated this energetic number. 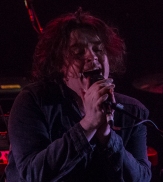 The mic problems were solved as Untouchable part one cranked up with Vince’s vocals suddenly exploding with full clarity from the speakers and the crowd were suddenly singing along loudly like some sort of Welsh rock choir for this powerful song.

Anathema’s fine balance between power, passion and soulful sensitivity were perfectly manifested as they moved in to Untouchable part two. This is a song that this reviewer associates with staying up with his dying father on his last night before his demise in the morning, and had played it on the journey up to the gig resulting in an uncharacteristic melancholy.

Any sense of personal melancholy melted in the beauty of the moment as the crowd sang along with real feeling – there were a few with a tear in their eye as it reached a climax, and more than one sad heart in that venue was uplifted by this wonderful song. I have sometimes wondered why they play this piece so early in their set but it made sense tonight as it ignited the crowd, and opened the emotional gates between artists and audience, upon which this band thrives. A pulsating version of Thin Air from We’re Here Because We’re Here helped the gig really take flight. A Simple Mistake from the same classic album majestically follows. Strangely there were two drum sets on stage with usual keyboardist Daniel Cardoso on the main set and drummer John Douglas on a smaller additional set, and these two really combined powerfully as the piece built and built – in such a small venue it felt a little like the other instruments were battling with the drums, but then the guitar cut through and they rose to a powerful conclusion.

The usual Cavanagh banter punctuates the set between the songs with even a playful few bars of Bohemian Rhapsody at one point. Daniel Cavanagh explained that they have been ensconced for nine months doing their new album “in a room with a sofa and a computer”, and hints that Vince thinks it’s the best thing they have ever done, to which his brother with a little embarrassment points out “We haven’t done it yet, just get on with the next song!” 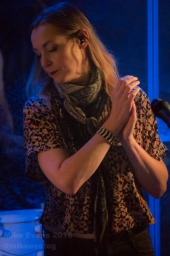 Lee Douglas takes lead vocals on Ariel from their most recent album, Distant Satellites, and once again mesmerises the audience with her voice, combining so resonantly with Vince’s vocals as the song gradually increases in volume and intensity, in the trademark Anathema manner. A real showpiece of any Anathema gig is the song penned by their drummer John Douglas, The Storm Before the Calm, which sees him rather appropriately take up the main drum set with Cardoso moving to keyboards, with Vince Cavanagh on additional keyboards. This epic piece grows like the eponymous storm, developing from initial chanted vocals from Lee Douglas. Daniel Cavanagh had a few guitar problems which were overcome quickly before he soars above the wall of sound pounded out by John Douglas and the rest of the band, and then Vince’s heroic vocals joined the stratospheric guitars as they reach a satisfying crescendo.

Daniel Cavanagh, somewhat topically in the week of a Presidential election, introduced the next new song by announcing that they have been enjoying touring in the USA, saying that “America is a great place… if you ignore the politics and guns!” He then explained that during a soundcheck in Springfield they chanced upon a riff that caught their ear and developed it into a new song, with the current title Springfield. It does indeed have an eerie, pulsating riff with a slow build under Lee Douglas’ vocals, before Vince and Daniel engage in a trading of furious guitar riffs, before settling back in to a hypnotic rhythm. The Globe crowd are very appreciative of this fine new song, Daniel explaining that playing a new song in front of an audience helps them evolve it for the album as songs grow in a live setting. It certainly bodes well for the new album.

The Beginning and the End from Weather Systems brought us back to more familiar territory with John Douglas on drums and Jamie Cavanagh on bass laying a rock solid foundation upon which Cardosos’ piano flows along beneath the soaring guitar. The main set finished with a real blast from the past with a vocoder drenched, keyboard driven Closer from the fine 2003 album A Natural Disaster. This song particularly stood out as being from a very different mould to many of the other songs in the set, and injected a different and rather bewitching hypnotic strand of musical DNA into the atmosphere, with the crowd desperate to hear much more. 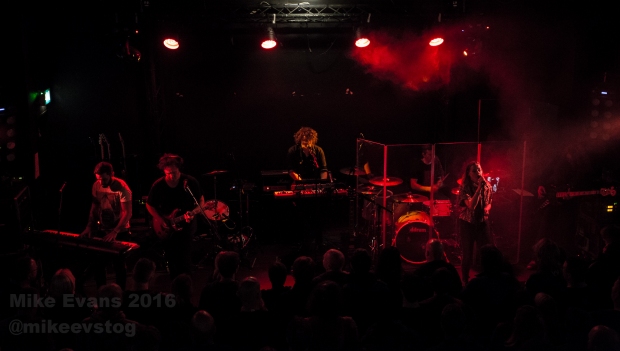 Anathema returned with an extended encore set of six songs with Cardoso’ delicate piano on Firelight giving way to the staccato programming of Distant Satellite. In all honesty this was a song that on the album this reviewer previously struggled, but in a live setting it is transformed with power. Vince Cavanagh on a drum helped increase the percussive wall of sound built by Cardoso and  Douglas. The echoing, repetitive refrain of I’m Alive carried positivity and truth, and helped dispel any lingering melancholy for this listener.

Somewhat bravely, two new songs were included in the encore with upbeat Bricks, which originated in 2005 but was never recorded, now to emerge in a much changed way. The Optimist featured a keening guitar riff and Cardoso on piano, its quality can only leave fans feeling aptly optimistic about the new album.  No Anathema gig is complete without the remarkably beautiful voice of Lee Douglas enchanting the crowd with a crystalline performance of A Natural Disaster. This was truly music to heal the soul. Anathema certainly embraced their past with final song Fragile Dreams from 1998’s Alternative 4, which was a great finale to a fine gig.

Perspectives on gigs always have to be filtered through personal feelings, which clearly influenced this reviewer experiencing the emotional journey from Untouchable to Distant Satellite and A Natural Disaster. Some others may say that this gig was punctuated with a number of completely unknown songs which may have diluted the intensity and impact of the gig as a whole, feeling a little like an exercise in live rehearsal. However, Anathema always go down different paths, constantly changing, challenging themselves and their audience – this was a gig in which the band wanted to partly trial new material with their fans, and use the crucible of live performance to help those songs evolve.  The new songs are already sounding promising, but are still understandably a little embryonic. Nevertheless, there was certainly enough familiar high quality to touch the heart and set the blood running to make this a memorable gig, and it will be fascinating to see where Anathema take us next. My advice is trust them and go with them.

[With many thanks to Mike Evans for permission to use his photos of the evening, and also to Simon Glacken of I Like Press.]

(NB – Setlist shared directly from Sound Desk – some of the new songs may be listed under ‘working titles’ and may appear under different titles in due course).