Dwiki Dharmawan is a fantastic pianist and another Indonesian treasure unearthed by MoonJune Records’ unending exploration of that country’s vast music scene. It should come as no surprise that in a country with a population of approximately 250 million, albeit with presumably less access to electric instruments and state of the art recording facilities than we in the West take for granted, that there are dozens if not hundreds of superlative players within its borders, and Dwiki Dharmawan is certainly amongst that category.

MoonJune’s Indonesian jungle raids have mostly returned with splendid guitarists, but Dharmawan is a keyboard player whose instrument of choice is the piano, the acoustic version of which he restricts himself to on this wondrous double CD. His playing has a fluid liquidity, often enlivened by a ferocious element, evoking mental images of rapids coursing through rain forests, especially when accompanied by jungle-esque found sounds, as on the expansive 12-minute opening title track.

Pasar Klewer is named after the largest textile market on Java, a hustling and bustling place represented in the cover painting, depicting the market denizens being entertained by a local folk group. The album was recorded in London in 2015 using Dharmawan’s core trio, which in addition to the pianist comprises bassist Yaron Stavi and drummer/percussionist Asaf Sirkis. These three are backed by a multi-national ensemble, and it is indeed fitting that the record was recorded in the world’s most multi-cultural city, hence the track in tribute, the foggy London In June, an odd amalgamation of Boris Salvoldelli’s chirping and whooping scat vocals and a jazzy vibe from the band, led by Dwiki’s highly expressive piano excursion.

The instrumentation on this album is stunning…no, really, it is. The third track Campuhan features a gamelan orchestra and percussion, and Gilad Atzmon’s sax work here is simply the best I’ve heard in many a moon. Atzmon’s solo surges along on waves of piano and drumming counterpoint before floating back down to the core melody, where he is joined by Dwiki’s waterfall of piano notes, and the track is by then only just past halfway into its 13 minutes. To say that Campuhan is mesmerising is but a fraction of the praise this one track deserves. That the rest of the album lives up to it is testament to Dharmawan’s compositional and arrangement capacities, and the skill of the players he has surrounded himself with.

Following Campuhan is a cover of Robert Wyatt’s Forest, from his album Cuckooland, sung in his inimitable throaty growl by Boris Salvoldelli. Somehow Disney-esque, but curiously without being in the least bit schmaltzy, this version of Wyatt’s tune would not sound out of place on the left-field and fabulous Disney tunes compilation Stay Awake. Ending with Dwiki and master guitarist Mark Wingfield swapping beautiful solos, the song serves to take the album on another course, but having already ventured into fusion and Indonesian traditional music, it is obvious by now that Pasar Klewer is going to be a somewhat exploratory journey into the verdant depths, and it is all the better for that. 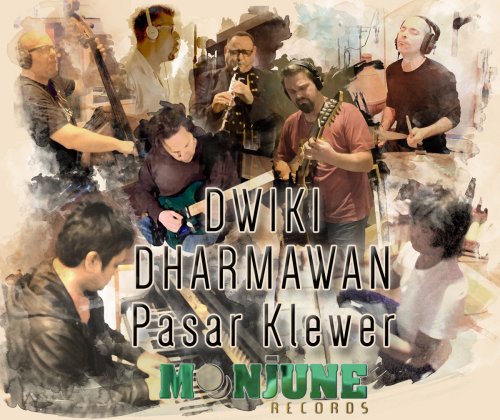 Mark Wingfield’s stellar guitar playing enlivens when it appears, as it does on the aforementioned title track, like an over-driven swamp thing emerging from the mists, and again on Forest where it takes a more lyrical route to the heart of the matter. With such well travelled and respected players as Wingfield and Atzmon and exotica-guitar luminary Nicolas Meier on board, this album was always going to be a musical treat, and it goes way beyond that in my estimation, developing a symphonic grandness over the course of its two CDs and 100 minutes.

Lir Ilur is a traditional tune and its gentle elegiac opening is later offset by the furious syncopation of Dwiki’s piano and his rhythm section, turning it into a free-flowing exercise in space and restrained power. Dwiki’s piano work on this tune is captivating, again, not to mention Nicolas Meier turning in a coruscating solo on the exoctically named glissentar, an eleven-string fretless guitar.

Lir Ilur leads into the smoky Bubuyu Bulan, where Gilad Atzmon’s sonorous clarinet takes the spotlight, creating a smooth carpet of sound with the double bass and piano. Frog Dance witnesses another change in tack for the album, heading off for a fleet-footed hop and skip with some fine sax blowing from Atzmon. Those three openers on the second CD only serve to highlight both the diversity and musicality of this peerless recording. That diversity continues with the unusual walking blues of Life Itself which contains some splendidly odd guitar work from Mark Wingfield. I seem to have fallen into the dreaded “track by track” descriptive dead end on this second CD, but it is hard not to wax lyrical about everything on this marvellous album.

The album ends with a gloriously melancholic instrumental reprise of Wyatt’s Forest led by Wingfield’s woozily inebriated guitar, shining yet another light on the all-encompassing nature of the music throughout Pasar Klewer, music that makes for a highly enjoyable album that will be played many times in the coming weeks and months chez moi, of that I’m sure.

Complete freedom of expression allied to the use of ancient Gamelan traditions and much cross-cultural pollination all helped on its way by some of the best of London’s ex-pat musician community result in a whole quite unlike anything you will hear this or any other year that might be very loosely described as jazz. Pasar Klewer, to put it in terms that are not too gushing – one hopes – is an overflowing and bottomless cup of the best coffee you’ve ever tasted. Do yourself several favours and buy it now!