Paul Bieiatowicz isn’t a house-hold name (yet), but you may well have heard or seen him playing with Neal Morse or Carl Palmer. As it happens, he’s not too bad a guitar player and TPA caught up with him prior to this weekend’s Night of the Prog festival in Loreley, where Carl Palmer’s ELP Legacy are playing.

Hi Paul – thanks for taking the time to speak with The Progressive Aspect.

Hi Dave, it’s pleasure to be talking with you!

I suspect that not that many of our readers know who you are, but you’ve actually been playing the last few years with two big-name Prog artists. I first saw you on Neal Morse’s Testament II tour and now you’re playing with Carl Palmer – how did all this come about?

Well I’ve been playing in Carl Palmer’s band for 12 years now – I heard he was looking for a guitar player when he asked a friend of mine, Guthrie Govan, to join his band. Guthrie was unable to do the gig, so he kindly recommended me. I sent him a CD of my playing and he seemed to like it. I spent the next couple of months transcribing and learning Keith Emerson’s keyboard parts on guitar – one of the most intense two months of my life!

A couple of years after I joined Carl’s band we did our first US tour. I was a huge fan of Neal Morse’s music and knew he was an ELP fan, so I sent him an email to see if he wanted to come to one of our shows. Unfortunately we weren’t playing anywhere near him, but we exchanged a few emails and in one I think I might have mentioned “if you ever need a guitarist…”. A few months later I got an email from him with the subject “Wanna do a tour?”.

Well that all seemed a bit too easy! I saw you play with him at De Boerderij, what a great band that was and a super show.

How did you get into guitar in the first place, what led you to progressive music and how do you know Guthrie?

My dad has always played, so I grew up with guitars around the house, and when I showed an interest in music it was the obvious choice of instrument. I started on classical guitar but really didn’t like the music I was playing, so didn’t have much motivation to practice. It didn’t really occur to me that I could play the music that I enjoyed listening to – I’d go to my guitar lesson, work on a classical piece of music, then come home and listen to whatever rock band was my favourite that week. My first big influence was Mark Knopfler – while listening to Dire Straits I had an epiphany that I could actual play music that I liked.

I got to know Guthrie through teaching at the same music college in Brighton, UK. One of the classes I taught was downstairs from Guthrie’s Session Styles class – every week you’d swear there was a guitarist in the room that had dedicated his entire life to playing jazz or country or rock or metal or fusion or blues or disco or whatever the particular style was that week. I’ve never met a player like him. 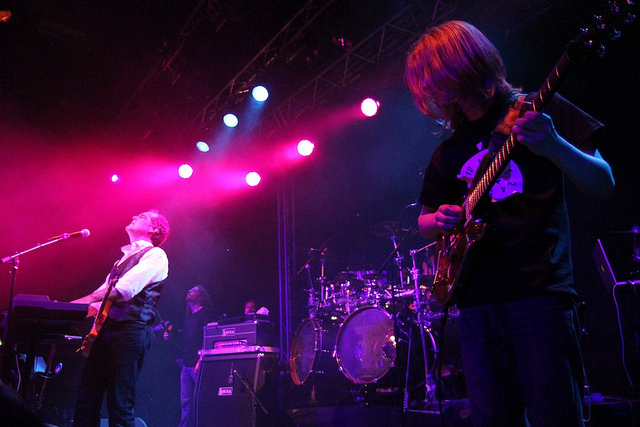 Mark’s a great, great guitarist – the playing on the first Dire Straits album is phenomenal. So if you were part of the Brighton scene, do you also know Luke Machin?

Yeah, I actually taught Luke. He attended the college I used to teach at in Brighton, great player.

And you seem to have found yourself being known for Progressive Rock – was this intentional, or were you just taking the work that came along?

I’ve always felt drawn to prog – I’ve always loved the idea of the epic work, as soon as I came across bands doing 30-minute songs I knew that was the genre for me! I guess you gravitate towards the music you love and I’m thankful that my career has taken me in this direction. Spock’s Beard was one of my favourite bands when I was studying at music college, so when I got asked to play with Neal Morse that really was a dream come true!

Of course you’ll be playing at this year’s Night of the Prog with Carl, and Spock’s are there too, but unfortunately different days…

It must have been quite daunting to transcribe all of Keith’s parts for guitar – how do you even go about doing something like that and why did Carl choose a guitarist rather than a keyboard player?

Well throughout most of my guitar life I’ve always been interested in arranging music originally written on other instruments. I spent a lot of my free time at music college arranging solo classical piano pieces, so when I got the gig with Carl all that experience came in very handy – it was like I’d got the job I’d been training for all those years… I just didn’t realise that I had been training!

Carl chose a guitarist over a keyboard player for two reasons: I think mainly he didn’t want any keyboard player to be compared unfavourably to Keith (and let’s face it, who wouldn’t be?!) and also I think he wanted to do ELP tunes but wanted to add an original twist – using a guitarist made sense for that reason too.

Of course it’s a particularly poignant time, so soon after the tragic loss of Keith, how do you find the fans react? Is there a favourite ELP piece that you play?

Keith’s passing was such a tragic loss and so shocking too. We got the news in the tour bus as we were driving to a show in Italy. By the time the show started news had started circulating on the internet so many people in the audience knew, but I don’t think the news had quite sunk in for anyone at that time. Carl dedicated Pictures at an Exhibition to Keith that night and said a little about him before we played the piece.

I enjoy playing all of ELP’s music, but I have a particular fondness for epics such as Tarkus and ELP’s arrangement of Pictures at an Exhibition. There’s definitely something very special about playing such long intense pieces of music – you go on a journey with the audience, and the feeling you experience when the piece comes to its end is something you just don’t get from playing 3-minute pop tunes!

I’ve been watching some YouTube clips of the band and Simon Fitzpatrick is quite a bass player – interesting too that aside from the keyboard parts, you’re both supporting the vocal melodies. Who decides who takes which part?

Yeah, he is something else! Me and Simon usually discuss who’s doing what in the arrangements (we send each other recordings and scores via email), and then when we have an arrangement worked out there’s usually a rehearsal with Carl (this can take place in soundchecks, hotel rooms or a rehearsal studio) where we play it all together for the first time and polish it to a finished piece.

Wow, you exchange scores – you sound like proper musicians! That being said, of course you have a love for classical music too as evidenced with your solo album, Preludes and Etudes – I guess you worked from scores for that too, not by ear?

And on the subject of your solo album, for those that don’t know, you’re using a lot of two-handed tapping technique, which is something you’re quite well-known for. On top of that, you crowd-sourced the financing too, right?

Yeah, my tapping technique is a direct result of having a pianist for a house mate when I was at music college. I used to watch her glide up and down the piano, playing arpeggios effortlessly, and figured there must be a way to do the same thing on guitar.

The album was paid for by a crowdfunding campaign – I really love the idea of music fans supporting music directly, and having direct contact with the artist rather than having to deal with a huge corporation, and today thanks to the wonder of the internet that’s possible! I have some of the most loyal fans I’ve come across and was deeply touched by their support in the making of my album.

So what happens next – anything else in the pipe? I see there are a lot ELP Legacy dates lined-up, all round the World…

I have a few projects in the pipe-line. I’m currently writing a soundtrack for a silent film which will be performed with a live band together with screenings of the movie in early 2017. Carl’s touring schedule doesn’t show any signs of slowing down, so it looks like I’ll be kept busy with that for the foreseeable future. I also have plans for a follow-up to my solo album – I’m constantly working on material for that.

Many thanks, Paul, I’m really looking forward to seeing you guys at Loreley this weekend!

Thanks Dave, yeah, it’s going to be great, see you there!